Photos & Quotes From 2019 Korean Trials: Kim Seoyeong Is Gunning For A Medal 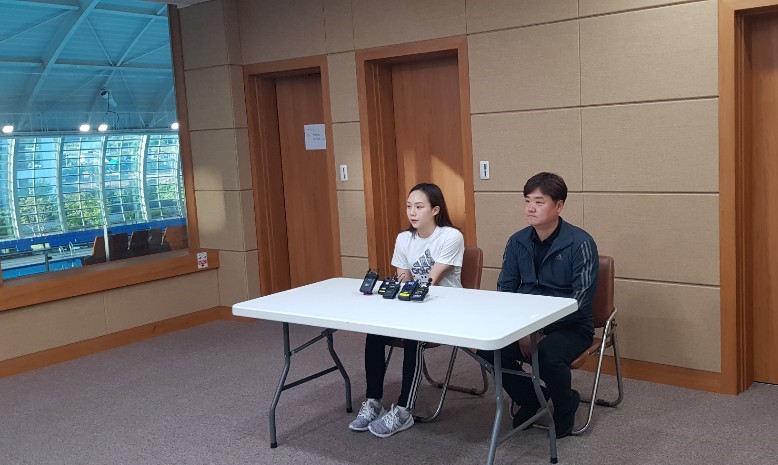 Catch some sights and sounds from the 2019 Korean Trials that just wrapped up at Gimcheon Swimming Pool. Current photo via Jinho Lee

The 2019 Korean Trials wrapped up yesterday at Gimcheon Swimming Pool and we’re expecting to hear next week who officially will be representing the host nation at this summer’s World Championships in Gwangju.

After the racing, several key Korean swimmers took to the mic to answer questions on how they feel they performed and what’s next in their preparations with the world’s biggest swimming competition outside of the Olympics taking place on their home turf this July.

For 200m IM and 400m IM winner Kim Seoyeong, the Olympian stated, “Going to Gwangju was my first goal for this year so I am glad.”

“I wanted to finish the first half under a minute but it seems I have more speed training to do. Even till 1~2 years ago, I used to focus more on trials (more on making it on the team) than the actual international competition. This year, everything is focused and scheduled for Gwangju.”

She continued, “2 years ago, my goal was to make it to finals. This year, my goal is to win a medal. I used to feel intimidated when I saw swimmers taller than me, but after the Asian Games last year and the Champion Swim Series this year, I am more confident that I can do my own race.”

Coach Kim Inkyun stated, “Our next step is to compete at the 91st Donga Swimming Competition (June 5-9) which takes place at Nambu University (same venue for FINA Worlds). Our goal is to get familiar with the facility and see what the water feels like. Seoyeong will enter in events she usually does not race. Then afterwards, we plan to train at the Jincheon National Training Center before heading to Gwangju. After Worlds, we have plans to go to Japan and Guam. Our goal is to go one step at a time for 2020 Tokyo. Not to fast, not to slow, but one step at a time, step by step.”

Re-live some of the action with a photo array below, courtesy of Jinho Lee.