Peaty Posts a 59.55 to Win the 100 Breaststroke in Edinburgh 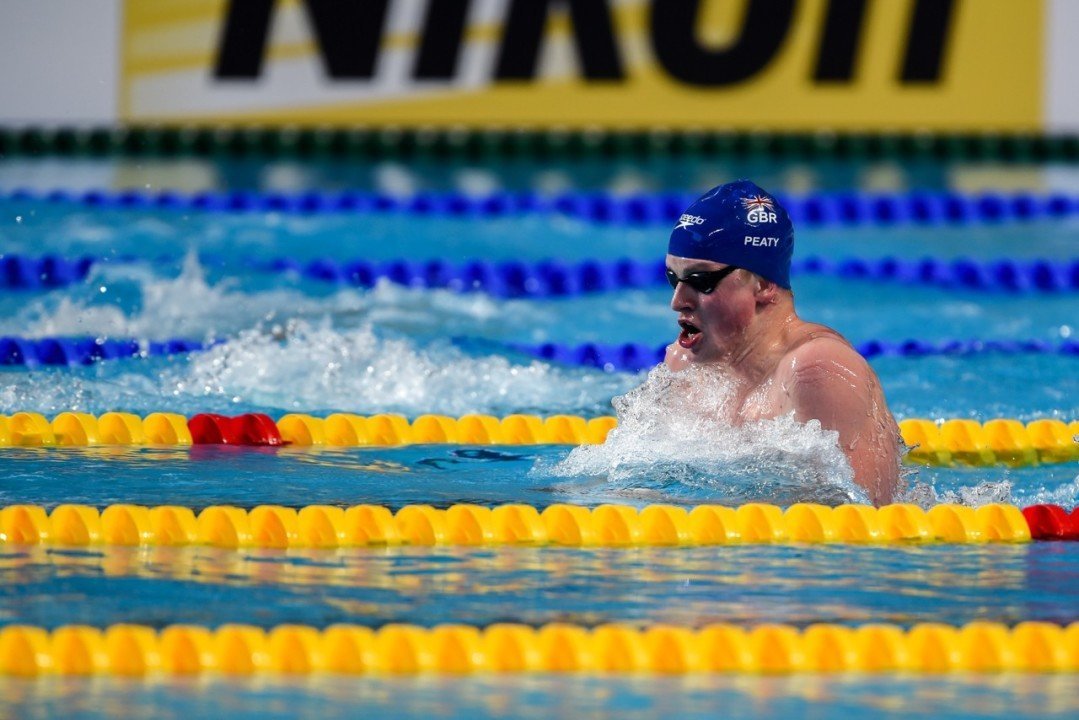 Adam Peaty won the men's 100 breaststroke at the Edinburgh International in a time of 59.55... Current photo via Peter Sukenik/www.petersukenik.com

World Champion Adam Peaty of Great Britain took the men’s 100 breaststroke at the Edinburgh International with ease finishing almost a second and a half ahead of the field. Peaty had a half second lead at the 50 meter mark turning in a time of 27.85 and never looked back winning the event in a time of 59.55.

Peaty’s result is the fastest time posted in 2016. He currently sits second behind South African Cameron van der Burgh in the 2015-16 world rankings with the time of 59.28, which he recorded in November.

The race for the silver was an exciting between Craig Benson and Ross Murdoch of Great Britain. Murdoch put up a 28.29 in the first 50 turning almost half a second ahead of Benson who touched the wall in a time of 28.75. Benson had the stronger second half of the two, but was only able to match and not overcome the lead that Murdoch had built. The two finished in a tie for second recording a 1:00.92.

Olympic champion Ranomi Kromowidjojo of the Netherlands won the women’s 100 freestyle in a time of 53.31. Kromowidjojo’s time puts her fourth in the world rankings behind Australians Cate Campbell, Bronte Campbell and Sarah Sjostrom of Sweden.

Kromowidjojo turned at the 50 meter mark in a time of 25.80 coming home in a final 50 split of 27.51. Her time is the fourth fastest time she has recorded since winning the Olympics in 2012 with the other three times being posted at either the 2013 or 2015 World Championships.

The men’s 100 butterfly had a thrilling finish as the top three competitors were separated by only eight one-hundredths of a second. Joeri Verlinden of the Netherlands took the event in a time of 53.53 followed by Dane Viktor Bromer who finished in a time of 53.58 and Estonian Kregor Zirk who posted a 53.61.

The 17 year old Zirk, who swims with Plymouth Leander, set a new Estonian record in the event taking down the previous mark of 53.79 set by Ralf Tribuntsov in 2014.

Ben Proud of Great Britain posted a 21.77 in the first round of the 50 freestyle skins competition. Proud, who set the British mark of 21.73 last month at BUCS, chose to forego the rest of the skins challenge.