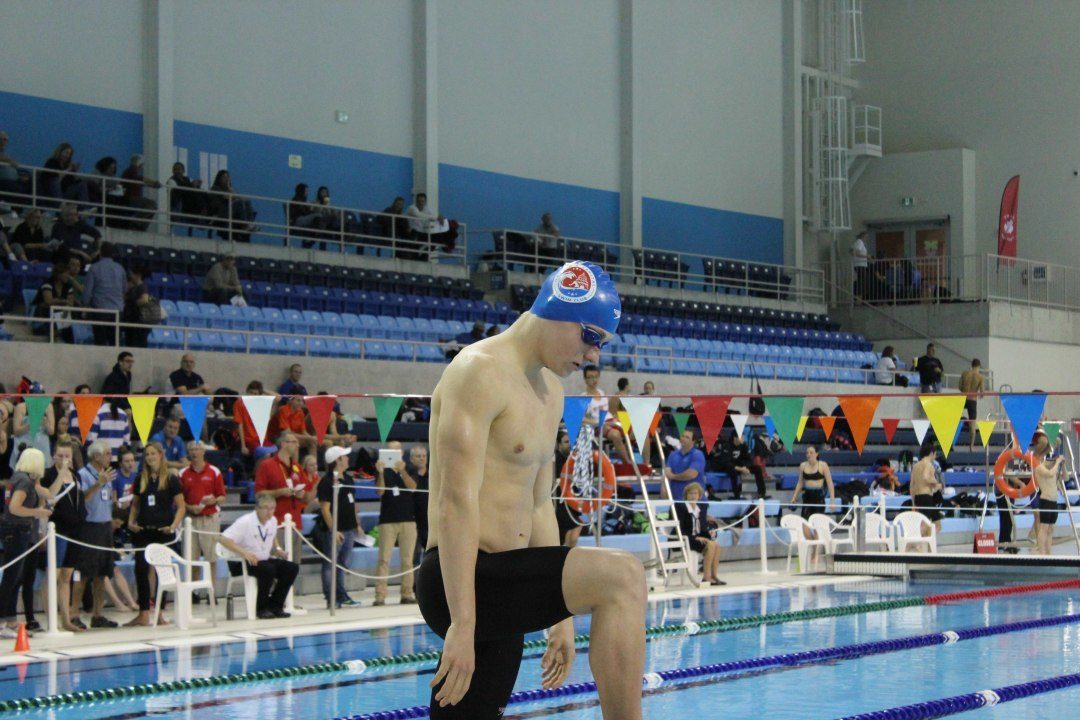 Baker spent the last 10 years as the head coach of the Oakville Aquatic Club, which placed 5th as a team at the 2019 Canadian Swimming Championships.

In the first event of night three it was the NCAP team that took the first gold, just narrowly defeating Swim Ontario in the mixed 200 freestyle relay.

The NCAP team rocked a 1:37.19 to take home the gold followed by the Swim Ontario team in 1:37.42. Coming in third was the Mississauga Aquatic Club who collectively put up a 1:39.07 to take the bronze.

Tessa Cieplucha of the Oakville Aquatic Club and Jersey Bishop of MAC went out hard in the 800m freestyle final, both edging themselves away from the rest of the field.

It came down to the wire with Cieplucha getting her hand on the wall first with an 8:37.46 to narrowly take down Bishop who clocked in at 8:37.72 for the silver. Coming in third was Sinead Eksteen of NCAP with a time of 8:44.23, just barely beating NYAC’s Kiera Brazeau who touched the wall in 8:44.23.

The men’s 1500m freestyle was all about MSSAC’s Christian Arseneau as he leapt out to a sizable lead to win the distance freestyle event. Arseneau was a 15:26.75 at the touch to win the race by just over seven seconds.

Finishing behind Arseneau was Liam Desjarlais who posted a 15:33.77. Just over five seconds behind him was Chris Murphy of NCAP who was able to grab the bronze medal.

The women’s 200m IM featured some of the top Canadian competitors at the competition with backstroke star Danielle Hanus and Swim Ontario star Danika Huizinga side-by-side in lanes four and five.

Breaststroker Kelsey Wog was also in the mix, however coming into the first 50 it was Monica Babits of MSSAC who led the way splitting a 28.10 on the fly.

Huizinga and Hanus both caught up quickly with great backstroke splits, as Huizinga was first at the halfway point in 1:01.60. Kelsey Wog began to catch up a bit on the breast but Huizinga still led the way with 50 to go.

It was Andrew Seliskar who added to his already many wins at the meet with a 1:54.56 in the 200m IM. After getting a disqualification on the 400m IM on night one, he completely made up for it by taking down Michael Andrew in the process.

The 200m backstroke gave way to somewhat of a surprising win as Danielle Hanus, who set a new Canadian age-group record in the 100m backstroke last night, was defeated settling for the bronze medal.

Matthew Mac took to the water against Michael Andrew in the 200m backstroke final, ultimately coming up with a win as he touched in at 1:59.63. Andrew was almost two full seconds behind him in 2:01.46.

Behind MAC and Andrew was Chris Murphy from NCAP. Murphy had a quick turn around as he just swam in the 1500m final, but was able to still pull a good swim together to drop a 201.49 and take home the bronze.

Last night it seemed as though Penny Oleksiak would break the Canadian age-group record in the 50m freestyle, and that she did, however she finished second behind Rebecca Smith who also broke it therefore setting the new mark at 25.40.

With Smith grabbing the 50m freestyle record, the two 14-year-olds would face off again in the 100m freestyle, and that race proved just as competitive as the 50 beforehand.

Andrew Seliskar might have to leave some of his items in the hotel room as he leaves Canada because he’s added nine gold medals that he’ll need to take home after the trip.

Seliskar added his ninth gold with a 47.61 performance in the 100m freestyle. Seliskar really worked his walls during the race swimming over half the race underwater.

He blew away the competition as Javier Acevedo representing Swim Ontario finished second behind him in 48.27. Third overall was Alex Shogolev of the University of Manitoba Swim Club who dropped a 50.49 to round out the top three.

The last event of the meet went to the NCAP squad giving Andrew Seliskar his 10th gold medal of the competition making him 10/11 (He was the fastest in the 400m IM, the one event he didn’t win, but was disqualified).

A lot of these times he posted are at or near his short course yards personal bests converted. The 100 is definitely the most impressive, or rather, surprising. It converts to a 42.9. I am really wondering how tapored he is because I would love to see a few national high school records this year. These swims make David Nolan’s 200 IM and 100 freestyle a lot more obtainable.

Unfortunately he won’t be tapered for any high school meets. Not saying he should be, just making the point.

That is too bad, but I guess I would rather see long term success instead of high school success. Do you know when his next big yards tapor is?

Danielle Hanus had 15 minutes rest between the 200 IM (which she won) and the 200 back, and likely the result would have been much different if she had just swum the 200 back.

It was an extremely quick turn-around so considering she swam both very well. She’s also not rested, they just lightened the work load the past few days heading into the meet.