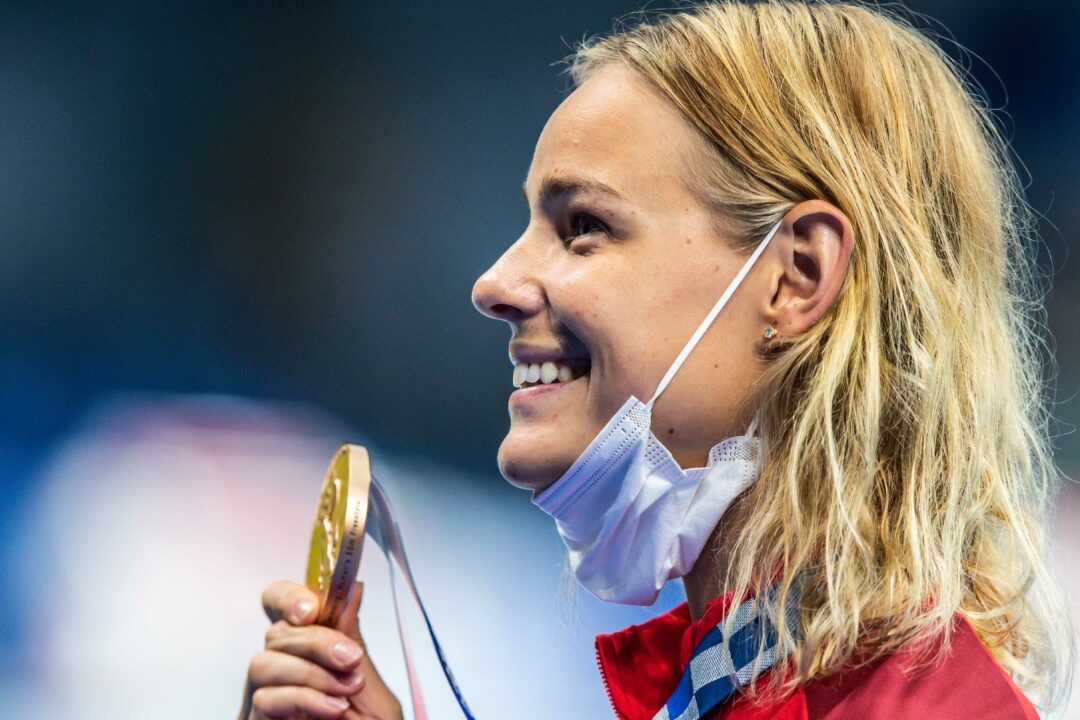 Freestyle ace Pernille Blume has decided to hang up her goggles, with the Dane announcing her retirement from competitive swimming at the age of 28. Archive photo via Jack Spitser/Spitser Photography

Freestyle ace Pernille Blume has decided to hang up her goggles, with the Dane announcing her retirement from competitive swimming at the age of 28.

I have some news to share with you.
I’ve decided to retire from competitive swimming 💙
It has been a long journey coming to my decision and it has been some somewhat an emotional ride. Although it is hard and difficult to say goodbye to something I love so much, then it is also equally exciting and thrilling to think about a new chapter is about to unfold in my life.
I don’t know yet how this new chapter will look like, but I’m taking the plunge and believing life’s got me and I will find my way to something meaningful and exciting just like swimming has been to me.

I’m so grateful for everything swimming has taught me, for the people who helped me achieve my wildest dreams, for meeting people across the globe and making friends, for learning to dream big, for getting to know myself even better and for all the incredible experiences I had throughout the years.
Swimming will always have a special place in my heart and I will follow the world of swimming closely, but this time from the pool deck.

Thank you for all the support ❤️

Blume underwent heart surgery in early 2019 to close a small hole in the organ. The surgery was successful and would reduce the risk of blood clots and cardiac arrest.

In 2021 she revealed her marriage engagement to fellow Olympic champion Florent Manaudou of France.

Blume was originally named to the Danish roster for the 2022 FINA World Championships in Budapest, but she declined her spot.

She ends her career ranked as the 3rd fastest long course 50m freestyler in history with her lifetime best of 23.75 from the 2018 European Championships sitting only behind World Record holder Sarah Sjostrom of Sweden’s 23.67 and Britta Steffen‘s 23.73 from 2009.

She and Sjostrom had some great battles in the 50 free.

She beat all those great sprinters to win the gold in Rio. I thought her reaction of surprise and happiness was one of the best moments of the swimming competition.

she is just lovely.

She could have had gone to 2028. Only would have been 34. Not unheard of. I hope she enjoys the next steps.

What a great career. Remarkable to be able to win gold in the 50, get heart surgery, and come back and medal again.

Wishing her the best

An example to follow, inside and outside the pool 🙂

Bout to be the greatest 50 swimmer ever

Baby Manaudou watching is dad being an Olympic champion once again, but this time in Paris

When I see a sport super couple, I kind of find myself hoping any kids find their sporting joy in a different area than their parents because the pressure to be as good or better than Mom and Dad would end up being so intense. So maybe little Lars or Fleur grows up to be awesome in volleyball or javelin-throwing instead.

I’d put money on handball. Between dad’s passion for the game and mom’s Danish heritage, seems like a natural fit.

The swimming community will cry.