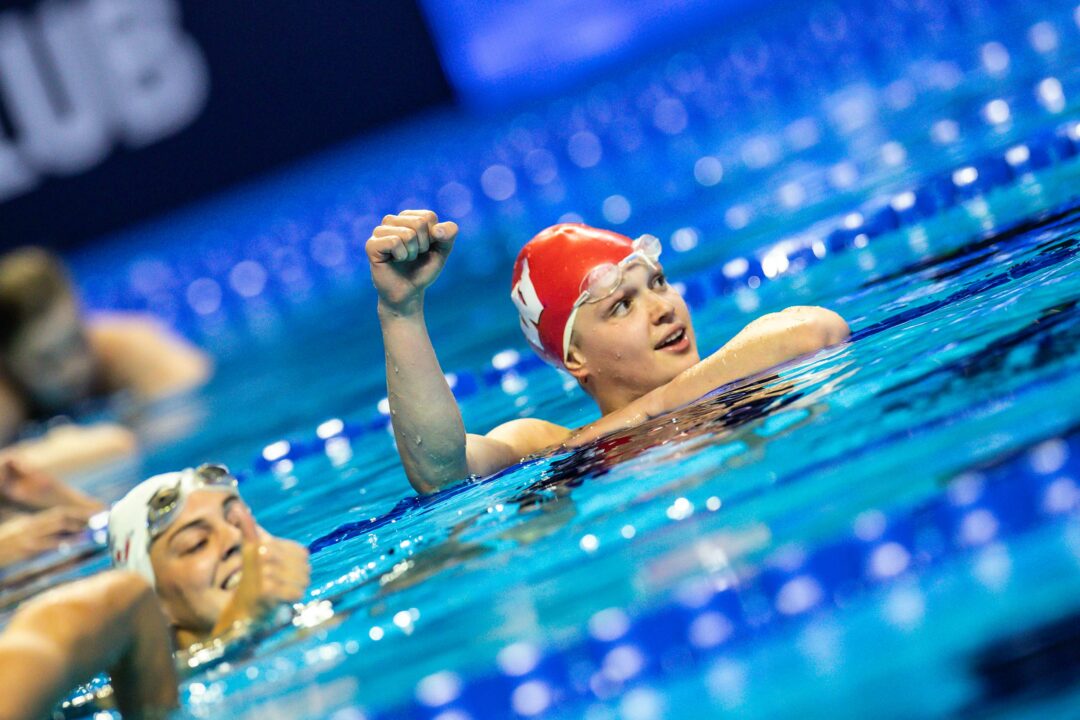 Charles Hartley makes his case why Phoebe Bacon only ranks third among athletes to come from her grade school. Archive photo via Jack Spitser/Spitser Photography

After winning two Olympic medals in Tokyo, Australian Alexander Graham gives some insight into some of the mental battles he’s overcome in the sport.

Just over one third of readers think that Tatjana Schoenmaker’s world record in the women’s 200 breaststroke was the most impressive of the Tokyo 2020 Games.

This article is a follow-up to this piece from August 2016: “Ledecky Second Best Athlete In Her Grade School’s History.”

There’s this grade school the whole swimming world has been hearing about as we stroke furiously towards the Olympic Swimming events in Tokyo.

During the recent Olympic Swimming Trials one of the school’s former students, 19-year-old Phoebe Bacon, qualified for the team finishing second in the 200-meter backstroke.

It was ultra-impressive but not surprising. Bacon’s been on the up-and-comer radar list in swimming for several years. As a senior in high school she broke the national high school record in backstroke.

A charismatic, engaging personality, multi-sport athlete, and on her way to doing great things in the pool and in the rest of her life, Bacon’s made her grade school and country so proud.

But she’s not the first person from that school to become one of the greatest swimmers the world has ever seen. None other than Katie Ledecky also attended Little Flower and, in fact, became a “buddy” to Bacon when Ledecky was in fourth grade and Bacon was in the pre-school.

We all know what Katie ended up doing. Nothing less than establishing herself as the greatest female swimmer of all time. She’s expected to win Gold Medals in her four individual events in Tokyo: the 200, 400, 800 and 1500 meter freestyle events.

Both girls, from one school, making the ultimate big splashes in the pool. The odds of two people from the same school growing up and becoming world-class, top of the line swimmers are something like a trillion to one.

This is a marvelous story for Little Flower. These two girls have put this school on the national map. In some swimming circles, Little Flower has become kitchen table conversation.

But as great as this story is, as wonderful as these women are, there’s even more about Little Flower you should know.

There’s this guy. Long ago he went to Little Flower. To this day they’re still talking about his accomplishments on the athlete fields and in the swimming pool.

Sports junkies love to speak with reverence about the grandeur of the three-sport athletic stars in football, basketball and baseball. This guy took that to another level: He was a five-sport standout at LF. Yes he was really good at football, basketball and baseball but he differentiated himself by also performing at high levels in tennis and swimming.

He swam for the Mohican Hills Swim during the summers. The squad was in Division H of the Montgomery Country Swim League (the best Division was A that swam much faster). As a 10 and under, he finished third in both freestyle and backstroke and the divisional championship meet, which earned him a season ending MVP award as the best 10 and under on the team.

Two years later he threw down second in the freestyle and third in the backstroke at the championship meet and, again, won the 12 year old MVP award.

Only one small glitch muddied his swimming career. At the championship relay event as a 12 and under at the Rockville Municipal Swim Center, he started his team off with the backstroke leg.

Aware he was in a high-profile meet, he wanted to show off by doing a back flip turn at the end of the first lap. But he hadn’t practiced it and got all twisted up and entangled in the lane rope. So the turn took about seven seconds and he finished last of the backstrokers by, give or take, four seconds.

His three other teammates, who had come with hopes of winning the race, never had a chance after their backstroker put them out of the race basically before it began. The Mohican Hills 12 and under boys relay team, which had come together so cohesively during the Division H relay carnival a month earlier that qualified them for the big championship meet, was no longer cohesive. July jubilation soured into angry August.

As they walked away from the pool, each of them asked the Little Flower backstroker why he tried the back flip turn. The honest answer, that he didn’t tell them that day, was he wanted to look cool. Since then that quartet hasn’t spoken to each other. It was too emotionally scarring for any of them even to talk about ever again. They all parted ways.

But enough about swimming. In tennis this guy finished second to Paul Meehan in the Montgomery County Tennis Tournament as a 12-year-old. While he cruised through the first five rounds, Meehan handled him easily 6-3, 6-2 in the championship. A second-place trophy wasn’t great, but hardware is hardware.

But this is what you need to understand: swimming and tennis were his two recreational sports. Playing basketball, football and baseball is what shot him to the top of the Little Flower athletic scene and has people talking about him to this day.

It would get tedious and too self-involved to list everything he accomplished. But let’s just consider a smidgeon of what he did:

Third grade: first CYO game ever. Ran the opening kickoff 85 yards for a touchdown against Immaculate Conception at Rock Creek Park. This break-out first-game was a sign of things to come for the next six years at the school.

Eighth grade: MVP of the Georgetown Prep, St. John’s, Good Counsel and Knights of Columbus basketball tournaments. Led team to 29 and 4 record and three tournament titles. Only setback was a 4 for 38 shooting performance in the city championship game against St. Paul & Augustine.

He tried to shoot his way out of a slump but never succeeded. His errant shooting caused his team to lose by 37 points. It was a setback that’s haunting to this day because some experts thought Little Flower was favored to win.

But that game was just a blip on what was one of the most memorable and spellbinding athletic careers in the history of Little Flower school.

This may not sound right, but it was a career that showed he was actually a better athlete than Ledecky and Bacon. Granted, he didn’t make it to the Olympics or play any sports in college or break any world records.

But when you look at his body of work, it’s all plain to see. The stats speak for themselves. The MVP awards in many different sports tell you about his versatility. Yes, he lost but it was only his fault a few of the times.

You may be thinking that grade school athletic achievements or that this whole story feels inappropriate and wrong-headed.

But it’s just one man’s opinion. And here it is: Phoebe Bacon is Little Flower’s third greatest athlete ever; Ledecky ranks second.

And this guy, a swimming blogger named Charlie Hartley, is the best athlete in the history of this famous and star-studded elementary school.

This dumb and narcissistic

Ur fun at parties huh

i mean they aren’t wrong…

pretty clearly a failed attempt at being tongue-in-cheek. still a pretty lame article and look.

Swimswam you need better vetting for your article selection.

Lmao that was a good one

I appreciate that Swimswam, during a time where they need to be their most accurate and prolific, allows Charles to bring his weird ComedyBangBang energy and quadruple-down on a premise for which it is not clear whether there is a payoff for him or for the reader.

This article was a swing and a miss.