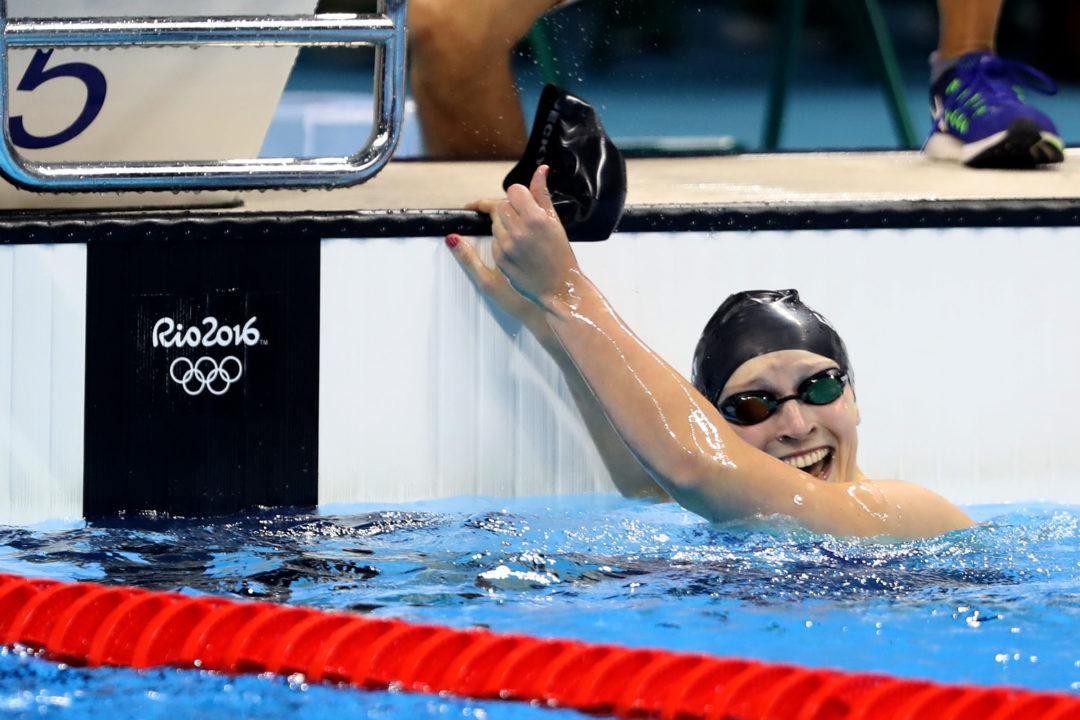 Katie Ledecky won the 200 free over fellow superstar Sarah Sjostrom, removing the Swede from contention for swimmer of the meet honors. Current photo via Simone Castrovillari

With her perfect 13-for-13 major international individual record at risk tonight in the women’s 200 free, American superstar Katie Ledecky came through in what had to be the toughest challenge of her career.

Ledecky and Sweden’s Sarah Sjostrom had managed to avoid racing each over the last few years despite being two of the world’s top ranked 200 freestylers, but that came to an end tonight.

Swimming in lane 5, Ledecky took over the lead of the race on the third length and never looked back. Sjostrom, swimming in lane 4, began to close on Ledecky with about 25 metres to go, but Ledecky surged ahead again, ultimately winning in a personal best time of 1:53.73. Sjostrom settled for silver in 1:54.08.

The win keeps Ledecky’s perfect individual record at international meets intact, and it also removes Sjostrom from the conversation for the Female Swimmer of the Meet Award. That will come down to Ledecky and Katinka Hosszu, who won her third individual gold medal of the Games tonight in the 200 IM.

Ledecky now has three medals; two individual golds to go along with a relay silver, with two more golds likely coming. Hosszu has one more chance for a medal in the 200 back, where she is one of the favorites.

After winning the 100 fly in a world record Sjostrom needed to come away with a win head-to-head against Ledecky in this race to have a hope of winning the award, but it was not to be. She still has medal opportunities in the 50 and 100 freestyle, along with the remaining relays, though those are outside shots.

With the toughest one out of the way, Ledecky is well on her to way to becoming the first female since Debbie Meyer in 1968 to win the 200, 400 and 800 freestyle events in the same Olympics.

Along with Ledecky, there were a few other big stories that came from North Americans on night 4 from the pool. Check some of them out below: