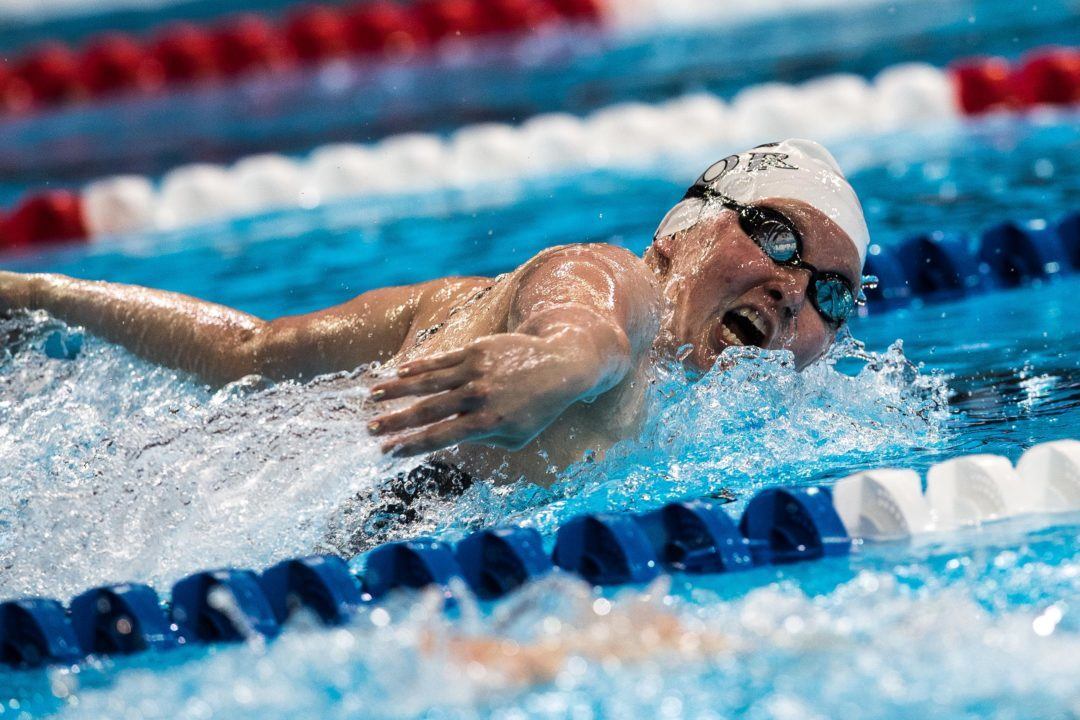 Tthe No. 3/No. 5 Michigan Wolverine men and women met the No. 5/No. 15 Indiana Hoosiers for a Big Ten rivalry meet on Friday. At the conclusion of the meet, both Wolverine teams successfully toppled the Hoosiers.

The Michigan women continue to look strong in their 2020 campaign as they now extended their undefeated season record to 4-0 while Indiana drops to 3-4. At the conclusion of their dominant meet, the Wolverines won 12 of the 16 swimming events while IU snagged just 4 event wins.

Sophomore UGA-transfer Carter, who debuted for the Wolverines last week at the Orange Bowl Classic, fit in perfect for the Michigan squad with her stellar fly efforts. After contributing to the winning 200 medley relay, Carter went on to sweep both the 200 fly (1:58.80) and 100 fly (54.20), both of which were at her 2019 in-season times.

Into the 200 IM, after building a large front-half lead, IU’s Mac Looze gained on Carter with a powerful 34.60 breast split. While both swimmers hit 27-highs coming home, it was Michigan’s Carter who earned her third win at 2:01.48. Looze settled for second place at 2:01.90.

The Wolverines finished the meet on top yet again in the 400 free relay with the efforts of MacNeil, Pyshnenko, Tucker, and Kudryashova (3:20.27). The IU relay would take second place at 3:24.17.

Heading into the Big Ten rivalry meet, the Hoosiers were coming off defeating the Wolverines at their home November dual 165-135.

Into the 200 free, Michigan’s Patrick Callan and IU’s Mohamed Samy swam almost simultaneously throughout the majority of the race. However, it was Samy who would touch out Callan by 0.03s for the win at 1:35.57.

IU newcomer Brendan Burns and Michigan veteran Miles Smachlo threw down two exciting swims during both fly events. In the 200 fly, it was Burns (1:44.12) who showed up Smachlo (1:45.82).

Yet when it came to the 100 fly, it was Smachlo who had the slight lead over Burns during the first 75. However, Burns gave Smachlo a final push in the finishing meters. But Smachlo successfully avenged Burns (47.00) with his winning time of 46.84.

However, the IU Hoosiers would not let the meet finish without a battle as the quartet of Blasovic, Burns, Franzman, and Samy would win the 400 free relay (2:56.00) over Michigan by 0.19s.

At the conclusion of the meet, the Michigan men avenged their loss in Bloomington by defeated the Hoosiers by 20 points. The Wolverines are now 4-1 as Indiana bumped to 6-3.

Coming up next for the Michigan Wolverines will be another Big Ten dual against Ohio State in Columbus on January 18th. During the following weekend on January 25th, the IU Hoosiers can be seen facing Big Ten foe Purdue in Bloomington.

Michigan ready to make up for last years NCAA’s

This is some pretty fast swimming for coming off Christmas break training. Not stellar, but the rivalry definitely got some tired people to go fast.

No Emily Weiss for Indiana???

I’m wondering about the same thing.

She was tagged in the second video of three on @indianaswimdive’s Jan 4 Instagram post, so she was at least uninjured then