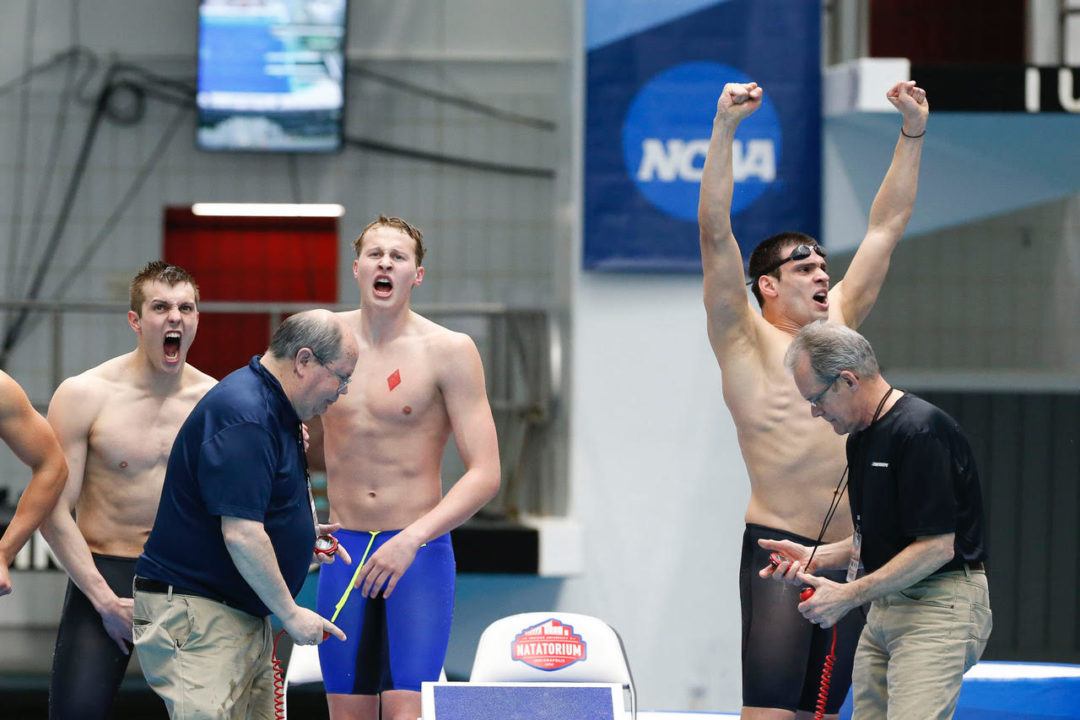 In just two years since the NCAA moved the 800 free relay to a stand-alone Wednesday night event, we've seen eight different relays surpass what was previously the fastest time in history. Current photo via Tim Binning/TheSwimPictures.com

That former American Record stood for seven years, from 2009 until last year, before it was demolished by a crowd of schools. The 2009 Texas Longhorns were 6:10.16. That relay included Olympians David Walters and Ricky Berens, along with Scott Jostes and Michael Klueh, swimming at the height of the supersuit era. The combination of that legendary lineup and the new rules banning bodysuits kept that record untouched until 2014, when Michigan blew past it with a US Open record 6:09.85 at Big Tens.

Last year, the first year the NCAA moved the 800 free relay to opening night, three different teams smashed through the 6:10 barrier: Texas, NC State and Florida. Texas lowered the NCAA and U.S. Open records with a 6:08.03.

This year, four more teams got under 6:10, including NC State, which smashed Texas’s record with a 6:06.53. A record that stood for years unchallenged has now been improved by three and a half seconds in just two seasons. Joining NC State were Texas (which broke its own American record from second), Florida and California.

This year, the entire event yielded a whopping 6 1:31s and an incredible 4 1:30s, including two on leadoff legs.

The corollary to the rapid 800 free relay improvement is the huge breakthroughs in the individual 200 free. That event is shaping up to be the race of the meet, especially after most of the top contenders came up huge in tonight’s relay. Here’s a quick look at some of the top seeds and how they fared on relays tonight:

After rereading it this article is completely ignoring the 2014 Michigan relay. I understand small mistakes, but to not know an NCAA record and write an article about a team breaking it after 7 years when it was actually broken 2 years ago is a rather big mistake.

Michigan- We never wrote an article about Michigan’s record tonight, because it was the former NCAA Record that stood before Texas broke it last year. It hasn’t been the record for some time. The article written about the American Record broken was correct in referring to Texas’ 6:10.19, because Michigan did not have the American Record. Not all 4 of their swimmers were Americans.

If you are referring to this article, then you’re missing the point of the article. This article isn’t a post about a record. It’s about the difference made by the change in the event schedule.

IMHO, moving this event to opening night is one of the smartest decisions the NCAA has ever made regarding swimming.

Coach Mike,
I agree with you; this move is far better for the sport and gives fans and parents another session of exciting competition. However, minus the suit era, it is important to note that the previous records were set well the 4 x 200 relay was contested mid-meet on Friday evening. Under the previous format, many of the competitors were gentleman that had they swam the 500 on Thursday and the subsequently the individual 200 free event, and were finalist, were swimming their 3rd all out 200 free for the day and 1000 yards of compatition the day before, so fatigue was a factor in many od the swimmers from each school, making the comparson really an apple… Read more »

Why would anyone down vote this? It has given the 800 Free Relay the cache of “Opening Day” for baseball or the “Kickoff Classic” for Football. Moreover it has hyped the relay to a major performance opportunity (and viewing opportunity) rather than its prior role as another “chore” for the 200 freestylers in the middle of a busy, intense meet.