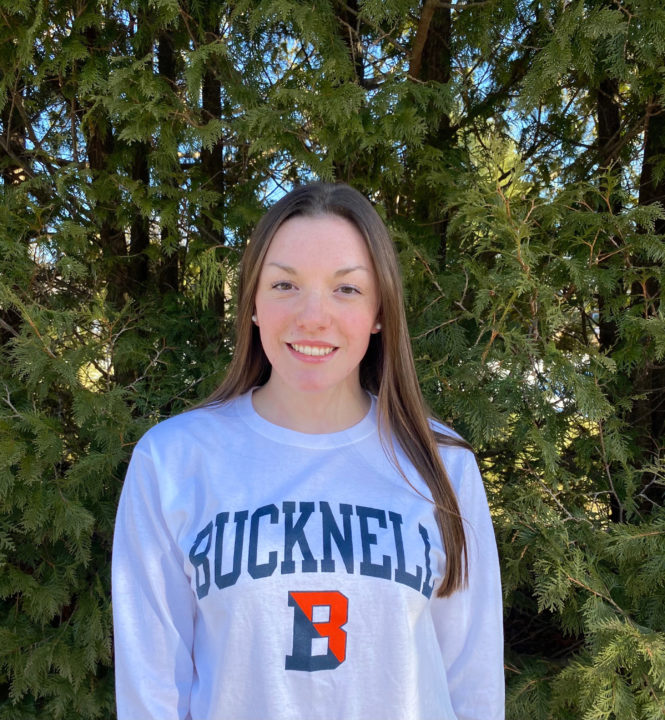 Megan Leyden of Bedford, NH has sent her verbal commitment to swim for Bucknell University beginning in the 2022-2023 season. She is a junior at Bedford High School and she is a year-round member at the Executive Swim Club. Leyden comes from a family of swimmers: her sister Sydney is a sophomore at Assumption College and their mother Michele Tamburo swam for Providence College. She was inducted into Providence’s Hall of Fame in 2019.

I am so excited to announce my verbal commitment to continue my academic and athletic career at Bucknell University! Thank you to everyone who has supported me along the way! Go Bison!!

Leyden competed for her school’s swim and dive team freshman and junior year. In those two seasons, she has won 4 individual New Hampshire High School DI State titles. Freshman year, she won the 200 IM and the 100 free. She dominated both events, winning the 200 IM by 9.85 seconds and the 100 free by 2.27 seconds. She also helped Bedford High School earn two silver medals for the 200 medley and 400 free relays.

This season, the high school junior claimed two more State titles. Leyden was just as convincing as she had been two years earlier. She won the 100 breast in 1:05.04 and she won the 100 fly in 55.18, both of which were personal best times. She smashed the previous New Hampshire State record in the 100 fly, which was set in 2017 by Taylor Hogan. The 100 fly time also qualified her for the 2019 Winter Juniors.

During the 2019-2020 season, Leyden would have been the team’s second-fastest 100 flyer and breaststroker, their third-fastest 100 IMer, and their fourth-fastest 200 flyer.