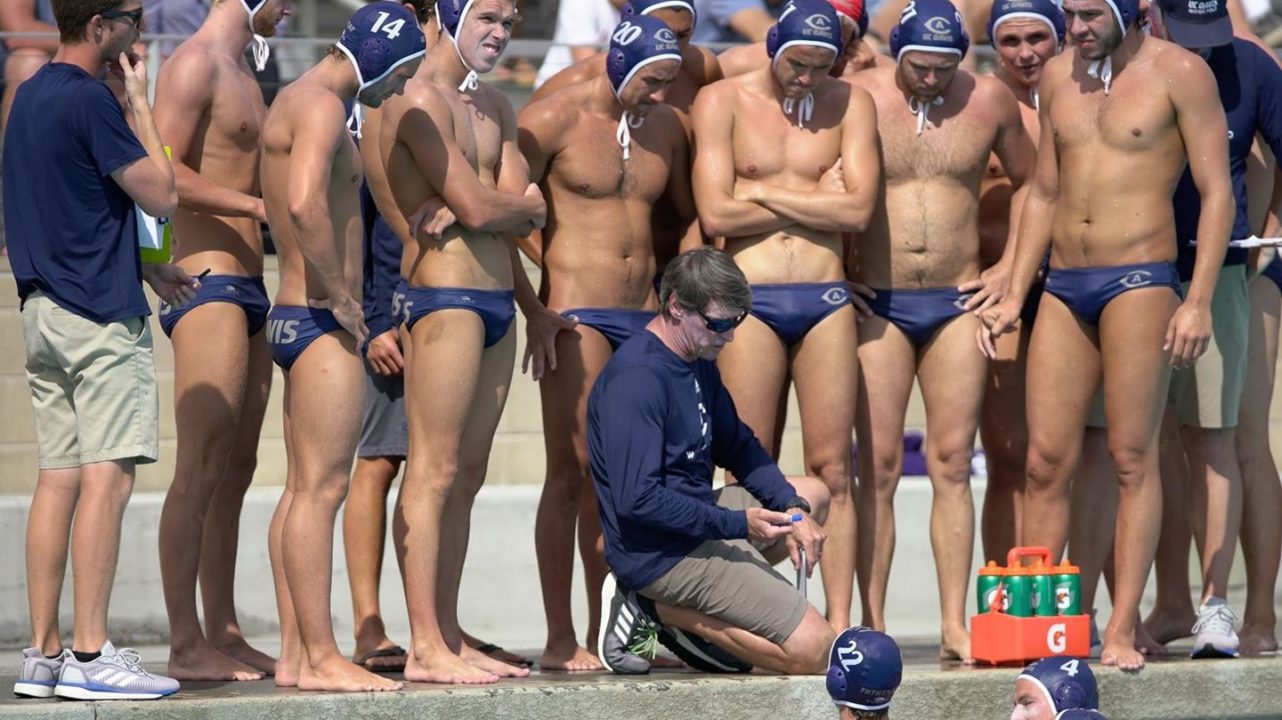 The NCAA water polo championship saw its first upset in the opening round on Nov. 30. The four remaining matches of the tournament begin Thursday. Current photo via Jose Moreno, UC Davis Athletics

The NCAA water polo championship saw its first upset in the opening round on Nov. 30 as #12 Bucknell upset #9 Harvard 13-12. The victory was the first ever NCAA Tournament win for the Bison.

The four remaining matches of the NCAA Championships are set for Thursday, Saturday and Sunday at the Chris Kjeldsen Pool at the Pacific Aquatics Center in Stockton, California.

With the win, the Bison earned their place in the NCAA quarterfinals, where they will take on defending national champion USC on Thursday.

How They Got Here: Bucknell (23-8) won the Mid-Atlantic Water Polo Conference regular season and tournament titles. The NCAA appearance is the first for the Bison since 2016 and seventh overall. Rade Joksimovic has scored a team-best 118 goals, followed by Logan Schofield (51) and Jared Stanley (42).

USC (14-5) earned an at-large berth after winning the Mountain Pacific Sports Federation title and finishing third in the MPSF Tournament. The Trojans are seeking their 11th NCAA title, while making their 15th consecutive appearance and their 34th overall. USC has won eight titles in the last 14 years. Jacob Mercep and Marin Dasic pace the Trojans with 43 and 39 goals respectively.

Previous Meetings: The two teams did not play during the 2019 regular season. This is the fifth all-time meeting between the Bison and the Trojans, with USC boasting a 4-0 mark. The teams last met in 2009.

Common Foes: USC and Bucknell each faced San Jose State and Princeton. Bucknell fell to SJSU 11-10 in triple overtime on Oct. 27, while USC topped the Spartans 17-9 on Nov. 3. Both teams defeated Princeton with the Bison winning 11-8 and USC picking up a 14-6 victory.

How They Got Here: The Aggies claimed the Western Water Polo Conference’s automatic berth, defeating UC San Diego 14-5 in the league’s tournament championship match. This is UC Davis’ seventh postseason appearance and first since back to back berths in 2016 and 2017. Eight different players have scored 20 or more goals with Nir Gross leading the way with 54 goals, the most for a UC Davis player since 2017.

The Waves won the Golden Coast Conference Tournament title as the #2 seed, defeating Long Beach State 14-12 for the crown. This is Pepperdine’s first NCAA berth since winning the NCAA title in 1997 and 13th overall. The Waves are led by Balazs Kosa, who paced the GCC with 86 goals, 128 points and 42 assists, while Marko Asic adds 57 goals.

Previous Meetings: The two teams did not play during the 2019 regular season. Pepperdine boasts a 26-3 all-time series lead over UC Davis. The most recent meeting was a 10-9 decision for the Aggies in 2016.

The winner of the Bucknell/USC match moves on to face #1 Stanford at 8 p.m. ET Saturday in the first semifinal, while the UC Davis/Pepperdine winner will take on Pacific at 10 p.m. ET.

The NCAA title match is set for 6 p.m. ET on Sunday.

The semifinals and title match will be streamed live on NCAA.com.

Thanks for all the water polo write ups! Keep up the good work and know that it’s appreciated.