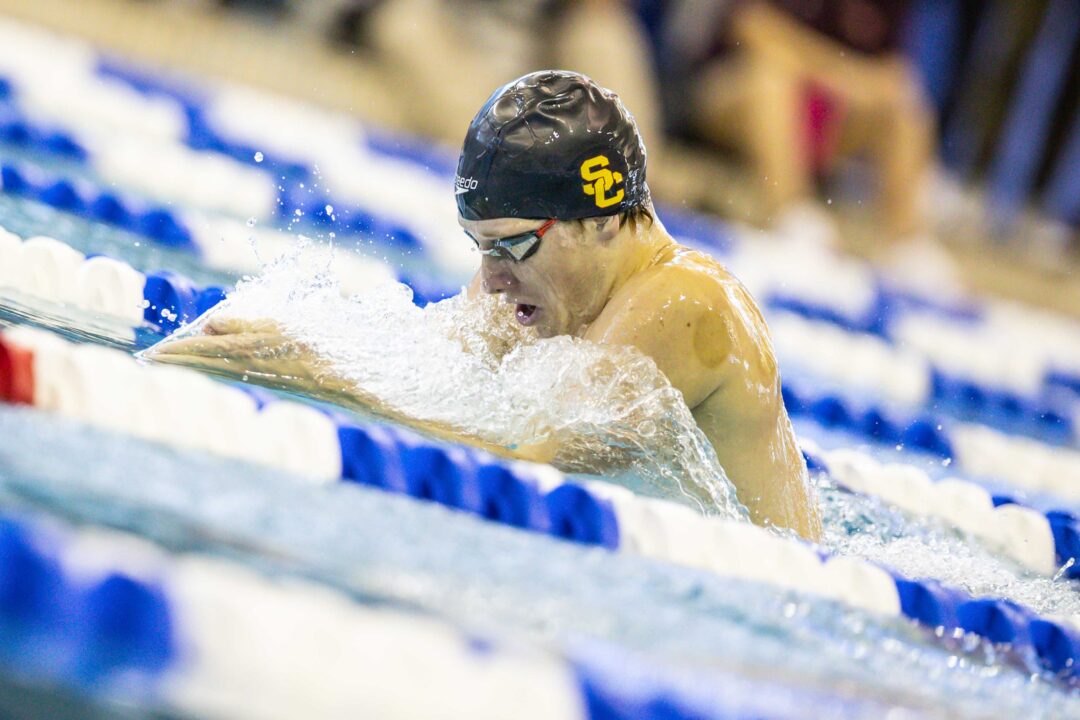 Matheson will return to his home state next season and joined a Sun Devil program that's on the rise after finishing sixth at the 2022 NCAAs. Archive photo via Jack Spitser/Spitser Photography

Following a successful freshman campaign at USC, NCAA qualifier Daniel Matheson will stay in the Pac-12 next season as he informed SwimSwam that he has signed on with Arizona State for next season.

A native of Peoria, Arizona, Matheson joined the Trojans from Scottsdale Aquatic Club as a highly touted distance recruit, cracking the top 20 in our boys’ high school class of 2021 re-rank last year.

As he returns to his home state of Arizona, Matheson joins an ASU men’s team that’s on the rise.

Last year, the Sun Devils had a breakout campaign that culminated with a sixth-place finish at the NCAA Championships, including freshman Leon Marchand winning a pair of individual national titles in the 200 IM and 200 breaststroke.

In addition to Marchand and Hill, Matheson will have some excellent training partners in Tempe with the likes of Gordon Mason, Andrew Gray and Liam Bresette producing notable distance freestyle swims last season.

Chris O’Grady, who was also a freshman at USC last season, initially entered the NCAA transfer portal following the conclusion of the campaign but ultimately decided to stay in Southern California.

ASU is on the rise and USC is the new bottom feeder in the Pac 12 mens standings. The men’s team has little trust in Mauer and she was a horrible hire to lead the men’s program. One of the reasons he left was due to her coaching style and how she divided the team.

asu is lucky to have him

Is there no sit out period now to transfer within a conference? Or is this bc of Covid rules?

Most conferences have removed those rules for first-time transfers. The Pac-12 voted for immediate eligibility in May 2021.

I think of the Power 5, the Big Ten is the only conference that still has one. Which is ironic, because Big Ten is usually at the front of the line with these changes.

Hmmm. I’m surprised Maurer didn’t want to keep him. Those time drops are remarkable. Maybe getting rid of him allowed for her to retain Ogrady? Or maybe Matheson had issues with Maurer, as does the entire Men’s and Women’s program.
I think ASU will be a great fit. The addition of Matheson to the distance corp. will serve them well.
Best of luck, Mr. Matheson.

Daniel told us when he entered the portal that his decision didn’t have to do with Maurer.

Danny is a talented swimmer, wish he could have stayed at USC as a Trojan but think finances were a factor – private school, 9.9 scholarships vs. In state ASU….just saying

Wow- game changer for the devils. This kid is a beast and a great pick up for Bowman. Watch out pac 12.

Loved the interview- the glasses rock!!

Based on the vast improvement of ASU men, great call.