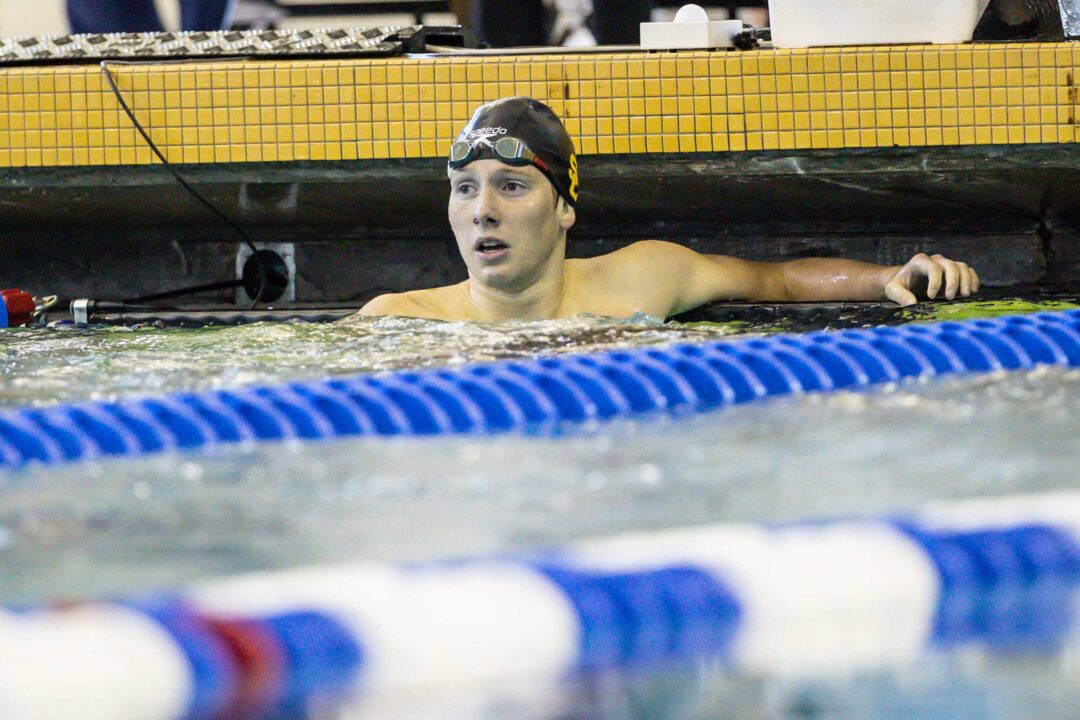 USC freshman Daniel Matheson, who qualified for NCAAs in the 500 free, 400 IM and 1650 free, has entered the transfer portal. Current photo via Jack Spitser/Spitser Photography

USC freshman Daniel Matheson, who competed in the 500 free, 400 IM and 1650 free at this year’s NCAA Championships, has entered the NCAA transfer portal.

A native of Peoria, Arizona, Matheson joined the Trojans from Scottsdale Aquatic Club as a highly touted distance recruit. In high school, Matheson was a finalist at USA Swimming Junior Nationals and competed at the 2021 Wave II Olympic Trials. Matheson was also named to the USA Swimming National Junior Team in both the 800 and 1500 free last fall.

This season was marred with controversy for the Trojans, as then-head coach Jeremy Kipp was placed on a leave of absence in the fall. Lea Maurer stepped in as interim head coach for the season, and she was named the permanent head coach on April 1st.

UVA has already started their Instagram recruiting of following Baron, Parker, Davis, Pineda, and Matheson after announcing their entry to the portal

Daniel was committed to Northwestern when Kipp was coach there and when Kipp left for USC Daniel followed suit. I’m almost certain this has something to do with that. Best of luck to Daniel in the future.

Serious improvements over at SMU should be appealing. Rhodenbaugh has turned the program around and will continue to do so. I believe the program went from 18 NCAA B cuts in 2021 to 41 in 2022 and qualified 3 for NCAAs. Looking at the roster and rising talent, it’s likely that they will bring a much larger team next year. Distance program will be much deeper in the future and would certainly welcome Daniel.

Absolutely. The Rhody effect is real.

Being from Scottsdale, ASU seems like a good choice.

Freshman swimmers transfer all the time and for every reason under the sun.
Best of luck Mr. Matheson and I hope you find the right program for you.

Should go to the east coast. UVA, UNC, FSU would all be good fits.

I just don’t see her style working for young college guys. There may be a reason there are few women coaches on the men’s side. Society might not like it, but, young men are different from young women. In their training, their approach to training, what motivates them. This coming from a mom that was a college swimmer and has two boys who swim too. Mike Bohn took the easy route. There is no way Lea Maurer did NOT know what was going on and did absolutely nothing to stop it.

It’s weird to me how much sexism there is among the USC fan base.

The only way you could take what I said as sexist is because that is how you view the world. I did not say anything sexist.

Yet somehow young women have been successfully coached by men for centuries…the idea that swimmers can’t be coached by the opposite sex is ridiculous.

Contrast to middle aged men and young women, who are identical in their training, their approach to training, and what motivates them.