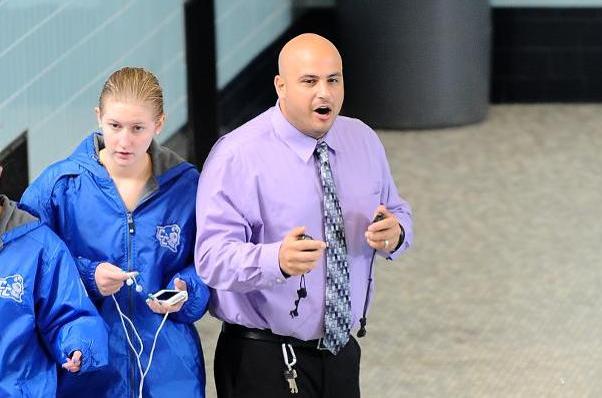 John Spadafina has been named the new head coach at Sacred Heart University, a Division I program in Connecticut. Current photo via Sacred Heart Athletics

“John has an excellent swimming pedigree and has shown the ability to mentor student-athletes to success, not only in the pool, but in the classroom as well,” said Valentine. “I am confident that under his tutelage our program will excel.”

Spadafina comes to SHU after spending the past four seasons as an assistant coach for the women’s swimming and diving program at Central Connecticut State University, his alma mater. During his tenure at Central, he coached an NCAA Division I NCAA B time standard qualifier, 19 NEC champions and 72 NEC All-Conference team selection. In addition, Spadafina coached a European Championship qualifier and Estonian National Record Holder win the women’s 100meter backstroke, as well as having student-athletes qualify for the US Short Course National Championships. In his four years on the deck, the Blue Devils set eight varsity records, seven freshmen records and numerous pool records.

“I am honored and humbled to be the next Head Swimming Coach at Sacred Heart University,” said Spadafina. “This is a dream come true to be a Division I head coach and I would like to thank Sacred Heart for giving me an opportunity to fulfill a long time dream. I am excited and looking forward to being a part of the Pioneer family.”

Spadafina began his coaching career in 2002 and has worked for some of the top swim clubs in Connecticut. He has coached numerous Connecticut swimming record holders, YMCA All-Americans, YMCA Champions, National Age Group top-10 finishers, and Junior and Senior National qualifiers. In 2009 while at the New Canaan YMCA, the New Canaan YMCA team placed in the top 10 at the YMCA National Championships. Spadafina is also a member of the SoNoCo Swim club staff where in 2013, both the men and women’s teams placed first at the Connecticut Senior Championships. Spadafina has represented Connecticut swimming as an Eastern Zone Coach and as a member of the board of directors as Coach Representative from 2010-2012.

Spadafina graduated from CCSU in 2003 with a bachelor’s degree in history and served as team caption Central men’s swimming and diving team in 2001-02. A native of Staten Island, NY, John resides in Wallingford, CT with his wife Amber (CCSU class of 2004) and daughter Chloe (3).

The above is a press release drafted by the Sacred Heart sports information staff.