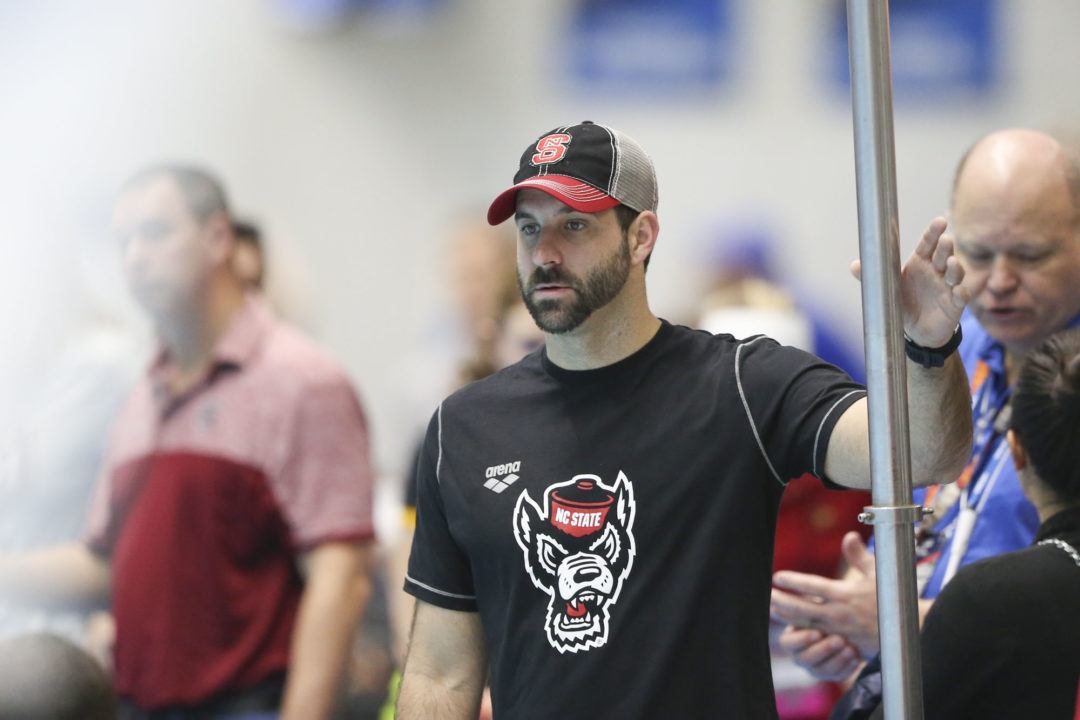 Though NC State won fewer events than last year, every member of the team--swimmers and divers--scored points. Current photo via Tim Binning/TheSwimPictures.com

Saturday, the NC State men captured their 5th-consecutive team title at the 2019 ACC Men’s Swimming and Diving Championships, held at the Greensboro Aquatic Center. With a whopping 412 of their total 1396.5 points coming from the senior class, the Wolfpack men could face a tougher battle from the ever-improving Louisville Cardinals next season. For now, NC State and Head Coach Braden Holloway are focused on NCAAs and improving upon their 4th-place finish at the 2018 Men’s NCAA Championships, which was won by the University of Texas, followed by The University of California-Berkeley (2nd), and Indiana University (3rd).

Following the conclusion of the competition Saturday, Coach Holloway spared a few minutes to answer some questions SwimSwam had about the team’s performance. Of particular interest was the scoring breakdown. Though NC State won fewer events than last year, every member of the team–swimmers and divers–scored points. A full breakdown of scoring can be found here, and a quick list of each athlete’s points can be found below. Note that relay points are not factored into the list featured in this article, and names are listed alphabetically.

In before the Wolf of Raleigh says something obnoxious

16
0
Reply
The Wolf of Raleigh
Reply to  Dudeman

Haters going to hate. Just proud to be apart of a program that is both athletically and academically in the top 1%

3
-14
Reply
Academically challenged
Reply to  The Wolf of Raleigh

By what measure are you making that assertion?

So, if I read your comment correctly, it says you are proud to not be part of a top program? Or you meant “a part” which would kind of discredit your point about the top 1% on the academic side of things.

I would call it a DINOasty! Or a dynasty. Either way you have build an amazing program! Congratulations.

Yes, Bernardino always wins now in the ACC, and has since 1987.

Very impressive to win 5 titles in a row! Different staff, same result. Holloway is the best young head coach in the game. Hope NC State is ready to pay because 2020 is just around the corner…. many schools will be looking for a new head coach.

Not that it means they’ll keep him, but I think he’s an alumnus.

8
0
Reply
The Wolf of Raleigh

I wouldn’t call it a Dynasty either. I think “dynasty” implies that it will eventually come to an end. The way I see it is that this is just a new beginning of dominance in NCAA swimming.

3
-15
Reply
ArtVanDeLegh10
Reply to  The Wolf of Raleigh

Texas has recently been the dominant team in men’s NCAA D 1 swimming, not NC State. NC State has dominated their conference but not the NCAA. Hasn’t Texas won the last 4 or 5 NCAAs and something like 6 of the last 7? That’s dominance. Getting 4th at NCAAs is not.

The question was “ACC” dynasty …

Were the bills an AFC dynasty ?

Sure, but are they known for that? Not really

Great program, great improvement the past few years. Will be interesting to see if they can get over Texas and Cal

Love my Wolfpack and would like to think so but probably not. They don’t have the history or strong tradition to draw in top notch recruits every year. A new facility will go a long way in attracting new recruits. It’s much over due

While this is the best stretch of NCAA finishes the Wolfpack has ever had, they have a ways to go to match the ACC record of the teams from the late 60’s thru early 80’s which won 12 championships in a row and 18 in 20 years.

Or, the streak that Virginia had where for 15 straight years they were the only team to win the ACC title.

Sounds like he is repeating the answer of another great coach (I forgot if it was Belechik or Coach K) where they say it’s not a dynasty because it is a different team each year. Or, maybe he is being humble because he knows he is not currently the best dynasty in State swimming history. There has really been a “dynasty” in ACC swimming every decade, going back to state in the 70s, then unc had one, then Virginia took over then state again currently, with the longest streak being the first state one followed by the Virginia one.