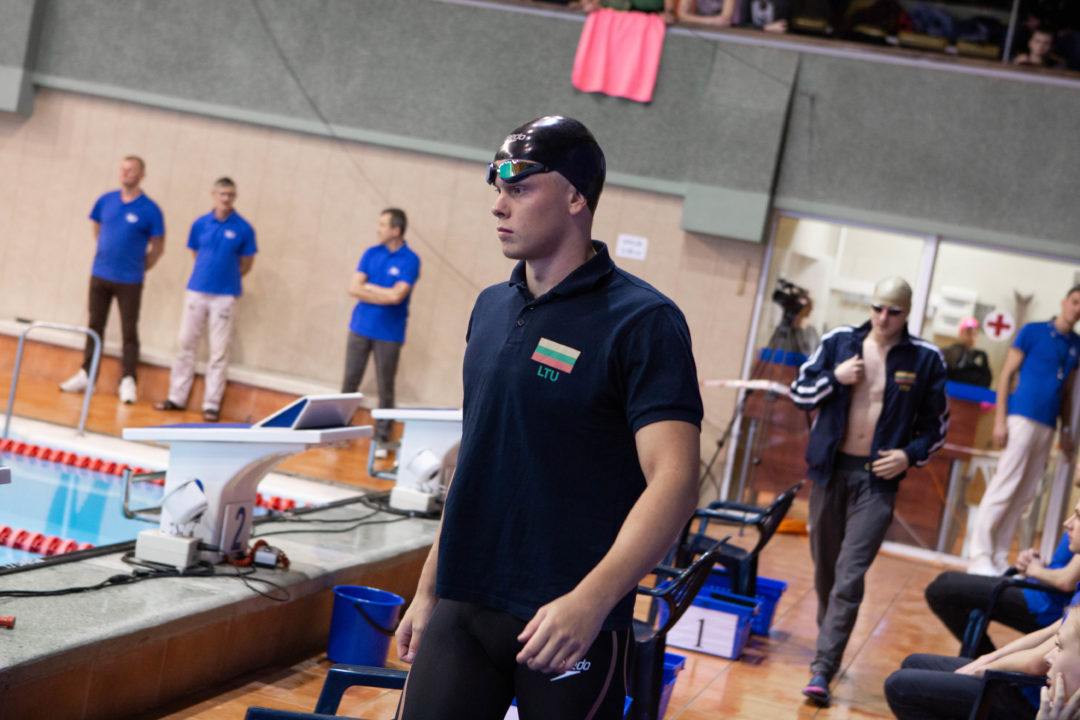 Night 1 of the 2019 Lithuanian Winter Championships coincided with the first official day of 2020 Olympic Games qualification. We already saw two athletes notch FINA B cuts in the form of Lithuanian Danas Rapsys and Pole Kacper Majchrzak. Rapsys snared his mark in the 400m free with his swift winning effort of 3:48.03, while Mjchrzak accomplished the same feat in the 100m free with his gold medal time of 49.90.

The pair was back in the water for day 2 of the championships, but rendered different results with their swims. For Rapsys, he pounded out his 2nd fastest 200m free time of the season, winning the event in 1:46.71. That mark falls just .02 shy of the 1:46.69 he put up at the Flanders Cup in January, a time that remains the 3rd fastest performance in the world this season.

However, with his 1:46.71 time coming on March 2nd, Rapsys has become the first swimmer to claim a FINA A cut qualification for the 2020 Tokyo Olympic Games. His time clears the minimum 1:47.02 needed for Tokyo, so the 23-year-old is well on his way to building on his two recent silver medals in this 200m free event. He took runner-up at both the 2018 European Championships, as well as last December in Hangzhou at the Short Course World Championships.

Also falling just shy of a B cut was Simonas Bilis, who took the 50m freestyle, but in a time of 22.89. That is off the FINA B cut of 22.67, but Bilis owns the Lithuanian national record of 21.70, so the 25-year-old has proven he is capable of reaching that mark, as well as the A threshold of 22.01 dictated by FINA.

Kotryna Teterevkova earned a FINA B cut for the women, taking the 200m breaststroke in a time of 2:29.77. That represented the only logging of the field under the 2:30 threshold and cleared the 2:29.89 FINA standard by .12.

Alicja Tchorz of Poland earned a B cut of her own with her gold medal performance in the women’s 100m back. Touching in 1:01.11, Tchorz topped the podium, but also easily dipped under the FINA threshold of 1:02.06. The A standard rests at 1:00.25, so she’ll need to slice almost another second off to capture that mark.

Another B cut was snatched by Andrius Sidlauskas, the two-time World Junior medalist from the 2015 Championships. Now 21 years of age, Sidlausaks took the 100m breast gold here in 1:00.18, swimming inside the 1:01.73 B cut. He’ll need a mark of 59.93 to claim an A cut, but the qualifying period has just begun.

In the meantime, Sidlauskas’ effort checks-in as the 10th fastest time in the world this season.

Deividas Margevicius was successful in the men’s 100m fly, taking the meet title in 52.87. He time fell just .10 shy of the Lithuanian national record of 52.76 set by Vytautas Janušaitis way back in 2009. As consolation, Margevicius captured a FINA B cut for his efforts.