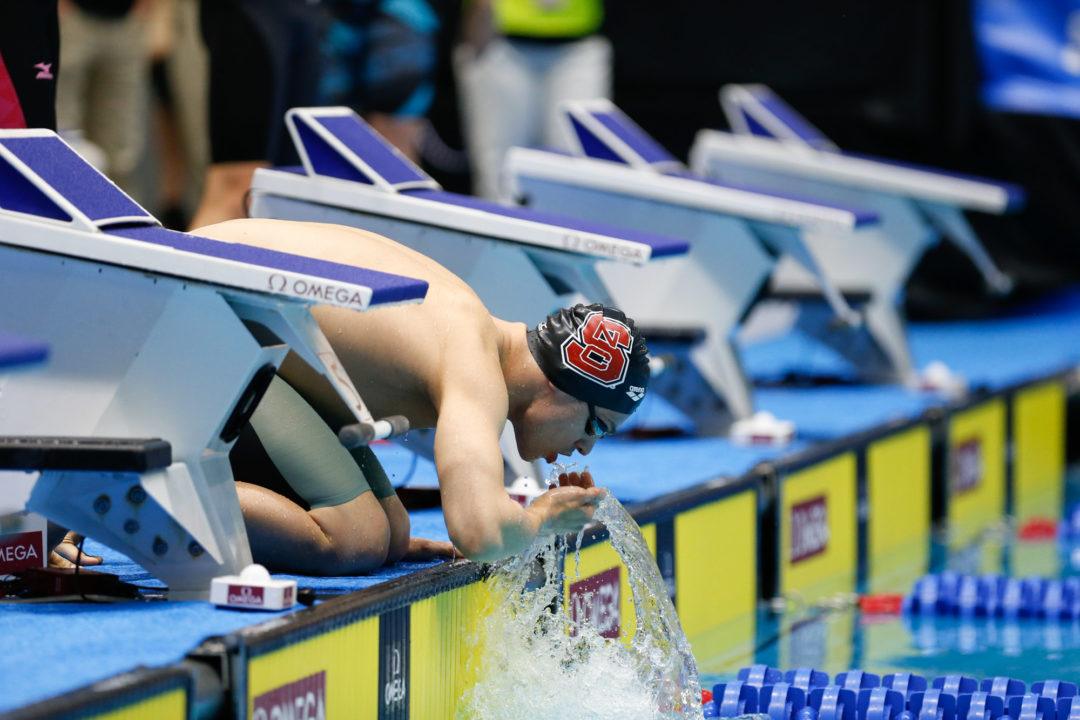 In their first meet of the season, NC State prevailed over Duke and Penn State in a tri meet on Friday, October 20th. Stock photo via Tim Binning/TheSwimPictures.com

Austria’s Christopher Rothbauer is set to race at a brand new competition for this season entitled ‘The 4 Nations Meet’.

The Texas women’s pro group elected to see where they’re at racing-wise following the months-long training interruption caused by the COVID-19 pandemic.

Thoughts from Head Coach Braden Holloway
“This was a big meet for the women. Unfortunately, we were a little shorthanded but we needed some new faces to step up and emerge and we had that today. I’m really proud of them; there were a lot of new names that really stood out today as well as the upperclassmen. Seeing the freshmen excel is really important for the development of our program.

Every time you have your first meet of the season, especially when it’s toward the end of October, they’re antsy to just get up and race and I think they did that. We have some guys that are talented and can do some different races but a lot of times we can’t put them in those races as much. We wanted to try and do that this first meet to see where we stood in a couple of areas and the guys stood up which was good to see.”

“We picked up from where we were last week and had a lot of good races,” said Penn State head coach Tim Murphy. “We had some people really step up with some strong swims, good times. We had some struggle a little bit, but people were picking each other up.

“Kaelan and Jane continued their strong path, and we had some other people step up on both the women’s and men’s side, especially some underclassmen, so it was good to see.”

Freund and Donahue posted their best times in the 200 breaststroke with both achieving the B Standard for NCAA Championships qualification, as Freund won the men’s race in 1:59.37 and Donahue the women’s in 2:15.63. They also both won their respective 100 breast races, as Donahue and classmate Carly Hart (Canton, Ohio) teamed up to place first (1:03.32) and third (1:03.81), while Freund took the men’s race in 54.55 seconds. Donahue, the reigning Big Ten Women’s Swimming & Diving Freshman of the Week, also bested Duke in the 200 IM (2:03.77).

Junior diver Hector Garcia Boissier (Las Palmas de Gran Canaria, Spain) was also an event winner on the men’s side, claiming the 1-meter board with a score of 360.10. For the women, sophomore Maddie Hart (Bryn Mawr, Pa.) enjoyed a successful evening in multiple events, highlighted by a win in the 100 butterfly (55.21). She also placed fourth in the 100 backstroke (55.76) and 200 backstroke (2:00.32).

“NC State is a powerhouse and we had some good races with them, but they had a bit too much for us,” said Murphy. “It gives a marker though in terms of where we are now and the things we are going to face come the end of the season.”

Penn State will next return to the pool at Minnesota, also facing Michigan and Wisconsin, in a two-day meet set for Friday and Saturday, Nov. 3-4.

RALEIGH, N.C. – The second weekend of the season saw the Blue Devil swimmers and divers face another tough test Friday in a double dual meet against a pair of top-10 NC State squads and the Penn State men and women out of the Big Ten.

Duke’s women (2-2, 1-2 ACC), ranked 20th in the College Swimming Coaches Association of America Division I poll, split the day with a 159-139 victory over the Lions and a 195-103 setback to the eighth-ranked Wolfpack women. The Blue Devil men (0-4, 0-3 ACC) received several noteworthy individual performances in losses to fifth-ranked NC State and Penn State.

“We challenged the team after last weekend to come in and fight tonight,” said head coach Dan Colella. “We wanted to be able to race our competition and make sure that we beat them to the wall, whether it was fighting for first or fifth place. I think we did that for a number of our races, but it’s an area that we want to continue to work on.”

After the Duke women opened the meet with a second-place showing in the 200-yard medley relay, both squads received a boost from the springboards. Freshman Teddy Zeng captured the first individual win of his collegiate career, besting the field in the men’s three-meter diving competition with a score (385.75) that cracked the Blue Devils’ all-time performance list. Junior Josh Owsiany followed suit in second (324.10) and Zeng was also second on the one-meter board (336.30), as was senior MaryEllen Targonski in the women’s one-meter competition (259.10) and junior Mackenzie Willborn at the three-meter height (282.15).

“Isa had a huge smile on her face after that 200 fly tonight,” Colella said. “It was probably one of the best 200 fly performances in terms of feel this time of year. She swam a really strategic race and came up with the win.”

Junior Max St. George turned in solid performances while racing against a field of strong backstroke specialists from NC State. The Wheaton, Ill., native was third in the 200 backstroke (1:47.14) and fourth in the 100 (48.12). Sophomore Miles Williams was the top finisher for the Blue Devil men in the 50 freestyle (20.55) and the 100 butterfly (49.69), while the same event on the women’s side featured a second-place showing by senior Leah Goldman (55.35).

“It’s always fun to swim a Big Ten school,” Colella said. “Penn State, we’ve never swum against them before, so it was great to come away with a win on the women’s side. The men swam them really tough as well. NC State, both their men and women are top-10 programs and they performed like top-10 programs … We learned a lot tonight, things to build on. We’re going to continue to do that and get ready for Virginia in two weeks.”

The Blue Devils will next take on ACC opponent Virginia Friday, Nov. 3 in Charlottesville, Va.

Huge win for a young penn state team! Watch out for them.. especially next year when they return almost every single swimmer and diver

Couple thoughts…watch out for nc states 2 medley relay. Not even sure that’s their fastest combination. Read on Back and their Italian freshman who’s been 22.0 may be the way to go. He looks like he got stronger as the meet went on. If he can convert that to an 18.5 mid split, that should be one good relay.

What is up with NC state women. Swam well but they were missing a lot of high impact women swimmers. Seems like more than just illness or injury. Something happen?

Guntoro is doing a good job handling the transition with the sprint group. This is a very strong NC STATE.

I’m skeptical on if using Ress on the back leg is even the 100% right call, but he did throw down a PB in the 100 SCY back yesterday and looks in good form in backstroke. If they can get Izzo down into 18.5 territory, I don’t see how they’re not vying for a national title around the 1:22 or below mark. Molacek is a huge get for the breaststroke leg, essentially coming in and replacing Hren with even more emphasis on the sprint side, and Held is a great sprint flyer as well. Definitely a lethal combination if the free leg can be pushed. The women were missing Courtney Caldwell, Krista Duffield, Summer Finke, Sirena Rowe, and Elise Haan,… Read more »

Summer Finke can’t compete for NC State until after December, one year after leaving FSU. Transfer rules are totally biased against the athlete.