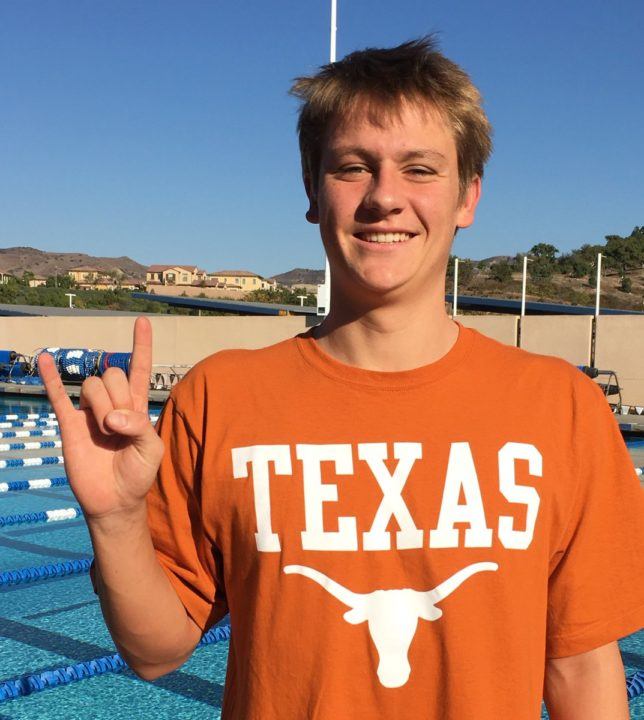 Andrew Koustik of Costa Mesa, California has announced his intention to swim for the University of Texas in the class... Current photo via Irvine NOVA (Twitter)

Andrew Koustik of Costa Mesa, California has announced his intention to swim for the University of Texas in the class of 2022. Koustik (honorable mention) is the fifth name on our list of top recruits from the high school class of 2018 to make a pledge to the Longhorns. He will join verbal commits Aitor Fungairino, Alex Margherio, Alex Zettle, Braden Vines, Charlie Scheinfeld, Daniel Krueger (#10), Drew Kibler (#2), Jason Park (#17), and Matthew Willenbring (#16) on the Texas squad next fall.

Koustik swims year-round with Irvine Novaquatics and has developed into the best 200 butterflyer of the cohort.

Exciting improvement!! This past weekend at the Kevin Perry senior meet Andrew did a personal best in his 200 fly breaking the 1:45 barrier and did a 4:22 in his 500 free. I don’t know if he was rested either way amazing swims!!!

only daniel roy left of the top 20

There are a lot of Texas fans that are hoping Mr. Daniel Roy is seriously considering Texas.

People were telling Aaron Peirsol not to go to TEXAS because Eddie might retire.

The program runs it’s self. Eddie loves what he does and won’t leave unless his wife or his health forces him to.

He’s gonna do great things there.

Gotta watch those typos. Particularly in this room!!

Texas quietly building a very solid and especially deep class… if even just two or three of these guys really takes off under Eddie, we’ll look back on this group as significantly underrated.

I think it’s the #1 class by unanimous acclamation so hard to call it underrated!

Eddie is a great coach however recruiting the #1 class in the country makes coaching a whole lot easier.

Wow! This is Texas’ 10th verbal commit and Andrew is a big pickup for Texas. He has serious talent and undoubtably will improve his 200 Fly dramatically at Texas. This is Texas’ deepest recruiting class ever with 8 out of 10 recruits ranked in the Top 100 by College Swimming. To put this in perspective, two years ago Texas didn’t get any recruit ranked in the Top 100 and last year Texas got 5 recruits in the Top 100. With the pickup of Andrew, Texas is deep everywhere except the breaststrokes. I doubt Eddie is going anywhere soon with a recruiting class like this!

This is good for him to go to Texas.. Calvary Chapel during the Jesus movement of the 1970’s created modern Christian worship music with guitars before that churches just used organs. A fact about Calvary Chapel where the high school is at.

Cynthia… how did you get into this room? I told you last week the internet is a big scary place, its easy to get lost. Go watch TV with the others.

Maybe, you need to watch TV. I’m old enough to have seen Debbie Meyers at 11 years old on TV in Mexico City.

PS, I probably should not mention off the wall facts but I have just as much as a right as you do to comment. Just because I was a crappy swimmer as a kid. As for the internet I have used it since 2,000 and I don’t like TV much anymore, tough. Tough. You people are elitist, so goodbye.

Eddie is 76 years old. Like it or not, he has few years left on the deck.

Maybe with that attitude

Realistically, how many 76+ coaches are out there in any college sport? Not saying its not possible, just unlikely he will be coaching for years to come.

There are a few, but they’re mostly in ’emeritus’ roles, floating around, coaching when they want, collecting 6-figure checks from USA Swimming, that kind of thing.

Don’t forget that he’s already had big heart surgery once.

Jealousy is a helluva drug.

Agreed. Everyone retires at some point. He is no exception.

I’m going to place my bets that you’ve never met this man. Not only is he incredibly healthy but he’s also incredibly motivated. I really wish people would stop the nonsense about him retiring the man is a complete beast. I honestly wish I was in half the shape that he is.

>I honestly wish I was in half the shape that he is.

Governor Abbott, is that you?

With that logic shouldn’t those weak (not top 100) recruiting years eventually impact them?

Texas didn’t need any top recruits, they were loaded.