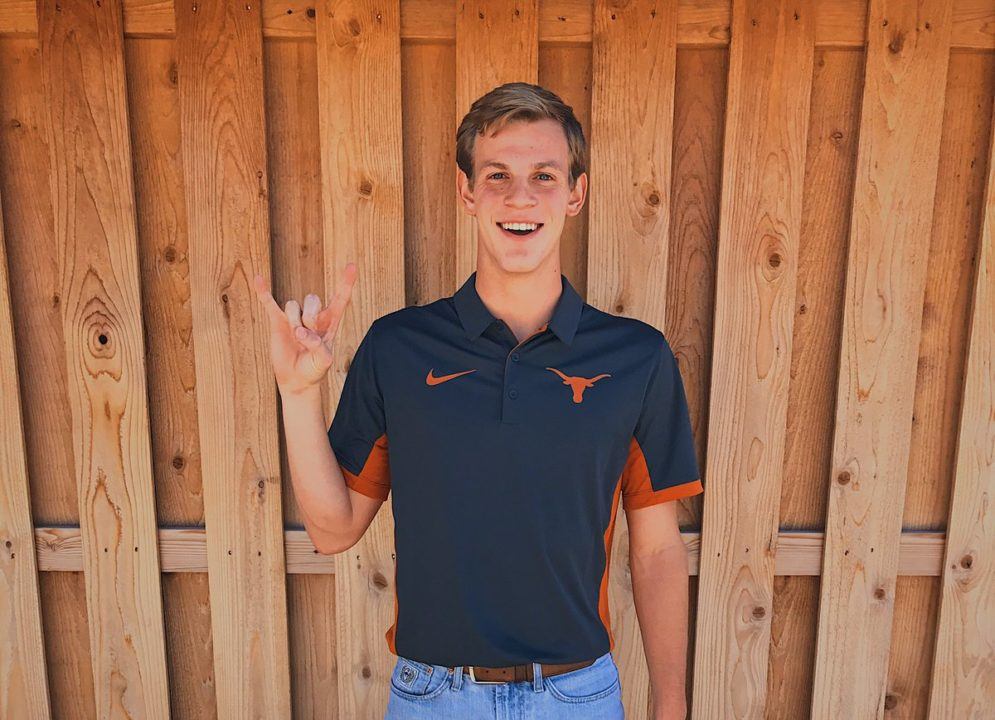 Braden Vines from Midland, Texas, has announced via social media his verbal commitment to swim for the University of Texas beginning in the 2018-19 season. Current photo via Braden Vines (Twitter)

Braden Vines from Midland, Texas, has announced via social media his verbal commitment to swim for the University of Texas beginning in the 2018-19 season.

“So excited to announce my verbal commitment to swim with some of the world’s best at the University of Texas!! Hook ’em!!???”

Vines swims for Midland High School and City Of Midland Swim Team. A versatile IMer, the West Texas swimmer has finished fifth or better in the 200 IM at the UIL 6A State Meet, in each of his three years of high school swimming. At the 2017 UIL 6A Swimming & Diving State Meet he took fifth in the 200 IM with 1:49.77 (he was fourth in both his freshman and sophomore years) and third in the 100 breast (56.32). Swimming for his club team two weeks later at the American Short Course Championships, Vines scored PBs in the 100/200 free, 200 breast, and 200/400 IM, landing in the A finals of the 200 breast and 200/400 IM.

So excited to announce my verbal commitment to swim with some of the world's best at the University of Texas!! Hook 'em!!??? pic.twitter.com/SP3JmCDPP5

54 low or even a 53 won’t score at NCAAs though. Braden is going to have to train hard and get down to at least a 51.9 by the end of this year if we want to see a Texas 4 peat, which I think we all want to see.

Braden’s best event is the 400IM and next is the 200IM. However, he has really been developing his breaststroke over the last 2 years so we’ll see where Eddie can take it. He’s better at the 200BR than the 100BR so he may never be the medley relay link UT needs.

Stop day drinking for one. And second this makes me think Daniel Roy is a NO.

Don’t be silly, Licon is a once in a lifetime talent

My guess is that Eddie was hoping he’d get Callan and when Callan announced that he’s going to Michigan that opened up money that went to Braden Vines and Aitor Fungairino. That’s a total guess, though.
Daniel Roy would be a huge pickup for the Longhorns and would likely thrive at Texas. Unfortunately, I think he’s leaning elsewhere, but I hope I’m wrong.

I doubt that money reserved for Callan ended up going to Vines and Fungairino… based on the talent in their recruiting class and roster at large, those two guys probably aren’t on athletic scholarship or are getting small amounts.

Bet you’re right! Wouldn’t think there is much (if any) money left for these guys after looking at the verbal commitments before them.

Prediction: he’ll fill the spot at Texas that Will Licon left. Eddie can guide him to becoming a killer breast/IM threat at NCAAs.