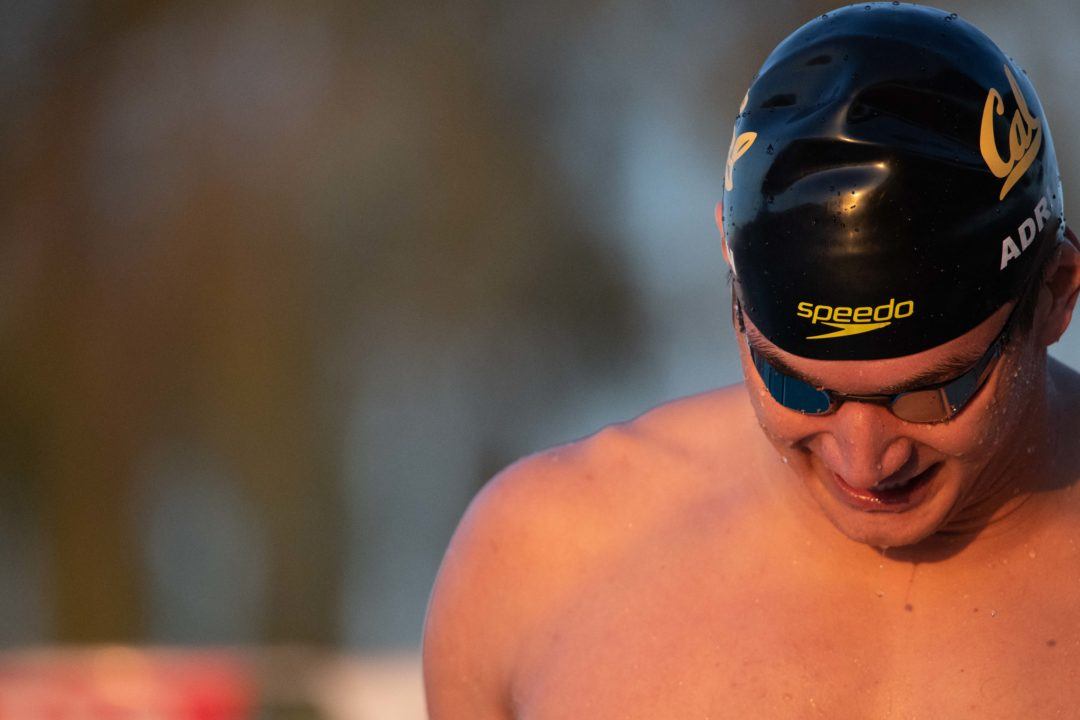 That streak will come to an end on Saturday, after Adrian swam a 50.57 in prelims that has him seeded 15th (with the B-flight still to race). That means, barring an unprecedented number of scratches ahead of him, that Adrian will not even get the chance to swim in the A-Final for a victory, and will instead race in the B Final on Saturday evening.

None of the national or international stars showed their cards much in Saturday morning’s prelims. Defending World Champion Caeleb Dressel snuck into the A-Final with a 50.24; backstroke World Record holder Ryan Murphy slid in behind him 8th in 50.35. U.S. National Team swimmer Michael Chadwick was 5th in 50.11, and they were all behind Harvard’s Dean Farris in 4th (49.92).

There were a few strong swims from the next tier of swimmers, however. Michael Jensen from Cal qualified 1st in 49.83 – just .51 from his best time. The aforementioned Farris was just .08 seconds from his lifetime best. While the top qualifying times aren’t as fast as we usually see at this meet, the depth of the field was much greater.

By comparison, in Indy, the top 5 qualifiers from prelims were all better than Jensen’s time; however, there were only 10 swimmers under 51. In Santa Clara, 19 swimmers were under 51. Adrian’s time would have actually qualified 8th for the final in Indianapolis.

There’s a chance that Adrian will still have the fastest time in finals, but by coming out of the B-Final, his streak will still technically be ended.

He still can put up the fastest time of the meet in the B final. In my book, that’s winning. Albeit not the offical spot.

Nah disagree. Why even have prelims if we are gonna disregard the result?