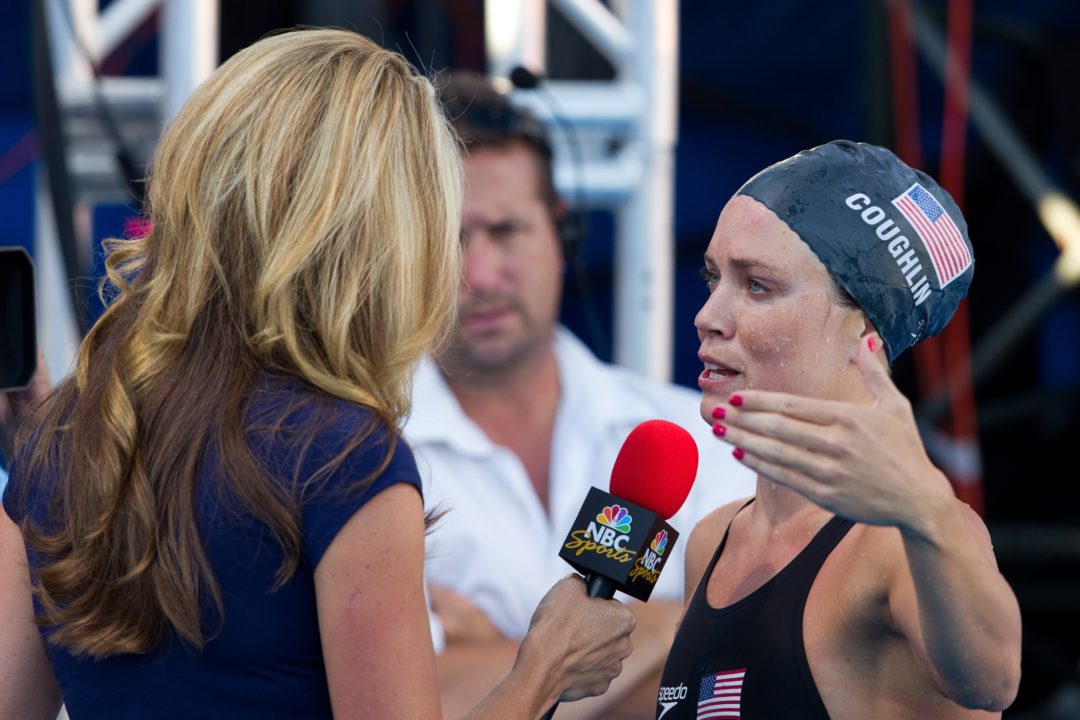 Natalie Coughlin will work as an analyst for the second stop of the FINA Champions Series in Budapest. Archive photo via Tim Binning/TheSwimPictures.com

Natalie Coughlin will be featured as a commentator for the second of three stops of the FINA Champions Swim Series, set to take place this weekend in Budapest, Hungary. The news was announced Wednesday in a press release from NBC Sports.

At the first stop in Guangzhou, China, Missy Franklin notably made her debut as a broadcaster in the same role.

Coughlin has had various broadcasting roles dating back to 2017 with NBC.

The event will be featured live on the Olympic Channel app and OlympicChannel.com, along with the NBC Sports app and NBCSports.com, at 2 pm on Saturday and Sunday.

The meet uniquely features four swimmers per event in a timed final format, with a large sum of prize money on the line.

Full entries for the meet are available here.

In Guangzhou we saw Chinese women in individual races 20 times
In Budapest we will see Hungarian women in the race 9 times.
In Indianapolis there will be 26 times American women racing for the money with the guaranteed prize of $5000.
What is it? A traveling issue or invitation issues that reflect the influence of particular national swimming association in FINA.
Is it a time already to change the name of this strange FINA’s activity of giving big money away to something more appropriate than “Champions Series”?

The Hungarian contingent increased from 7 to 10 swimmers which is presumably due to cancellation. Boglarka Kapas takes the spot of Mireia Belmonte on 200 fly (where Kapas is reigning Eu Champ), while Dominik Kozma will swim 200 free and Peter Bernek 400 free. We’ll see how they do, they could not focus on this event well in advance.

BTW with your sentence I fully agree

You’ve stated your objections so many times. Get over it. I suggest “Anything But Yozhik Series.”

Maybe Beisel will commentate on the third stop.

we could only be so lucky.