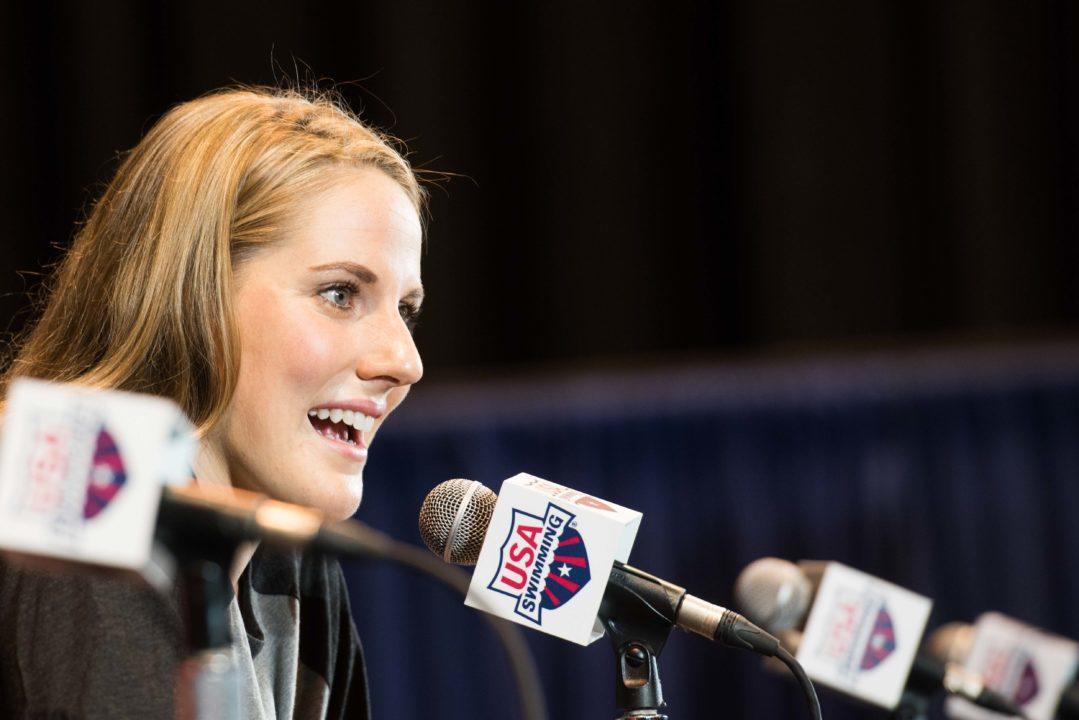 The 23-year-old will work as an analyst alongside Steve Schlanger of NBC.

The broadcast will begin at 8 am ET on Saturday and 7:30 am on Sunday and will be live on The Olympic Channel along with the NBC Sports app and NBCSports.com.

Franklin announced her retirement from the sport back in December after dealing with numerous health issues that dated back all the way to 2014. In addition to her five Olympic golds, she retired with eleven LC World titles, including a historic six at the 2013 Championships in Barcelona.

The competition this weekend brings an intriguing new format that will feature just four swimmers in each timed final event and prize money on the line. The winner of each race earns $10,000 USD, followed by $8,000 for second, $6,000 for third, and $5,000 for fourth.

The athletes competing received invites, with only the 2016 Olympic medalists, 2017 World medalists, world record holders, and the highest ranked swimmers in the world this year getting the call.

This will be the first of three stops, as the series will move to Budapest May 11-12 and then Indianapolis May 31- June 1.

The Americans scheduled to compete this weekend are Michael Andrew, Anthony Ervin, Dana Vollmer, Kelsi Dahlia, and Molly Hannis. For a full preview of the meet click here.

Rowdy just did a spit take…

To the right or to the left? Doesn’t matter, he couldn’t see this one coming.

Hopefully she is a replacement, not an addition. Would mean I no longer need to use the mute button.

Maybe she can put unreasonable expectations on Rowdy like “Rowdy is a great wholesome person who represents the sport with grace and dignity, I just know he’ll stop making all those mistakes in his broadcasts. I also know with his tremendous work ethic, Rowdy will be able to say more than just ‘breathing to the right’ and ‘knows not to take it out fast’.”

Rowdy brings an excitement and is devoted to his job and to the sport in whole. If you are noticing mistakes in his comments then you are already a well informed and knowledgeable in swimming person and you don’t need Rowdy to teach you. Is it possible to have somebody who is superior of Rowdy in this not trivial profession? Maybe. Until then, thank you Rowdy for your job and your love to the sport.

nah sorry thats a crystal clear yes to your question from me. that said, i actually enjoy rowdys commentary for the most part

I generally don’t mind Rowdy, except I cringe every time he feels the need to comment on a young swimmer’s virtue and family life. How many times has he said, “He’s such a fine upstanding young man who comes from a great family.” How many times did he praise Missy for “having such grace and poise” and “what a wonderful ambassador for the sport” when she was obviously mentally crumbling inside with her poor results. He is a people-pleaser who avoids conflict or unpleasant situations, I’m sorry but the mental health of Missy and Smitty and others is far more important. I think he sets the tone and pressure on young swimmers to act and speak like a Disney made-for-TV… Read more »

Nicole Livingstone, to answer your question of who is superior