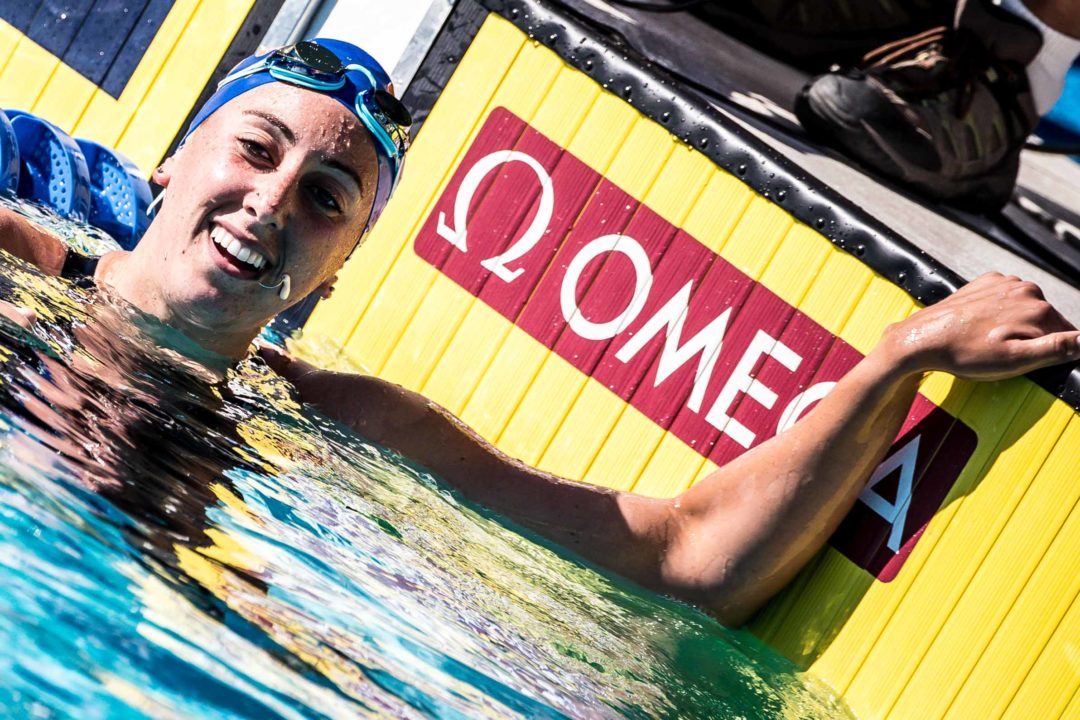 The Mizzou men and Florida women each took home wins in their dual meet on Friday, where nearly 40 NCAA top-ten times were posted. Stock photo via Jack Spitser/Spitser Photography

The Florida Gators traveled to the Mizzou Tigers on Friday for a fast morning of competition. Head Mizzou coach Andrew Grevers commented in the team’s press release about the teams having a slight advantage over Florida due to the team suiting up, which was recently highlighted in a Beyond the Pancakes interview segment

At the conclusion of the meet, the Florida women and Mizzou men were victorious. In the process, nearly 40 new NCAA top-10 times were posted, including four nation-leading times.

After leading off the medley relay in a NCAA-leading 50 back time of 23.50, Haley Hynes put up another national-leading time in the 100 back. Hynes won the event with a time of 52.06, bumping down Florida’s Sherridon Dressel for the top time in the nation. Dressel settled for second with a time of 52.35, right off her season-best of 52.21.

Mizzou’s Sarah Thompson, who swam butterfly in the medley relay, swept the sprint events for the Tigers. She first won the 50 free with a 22.22, just hundredths off her season best and NCAA #3 time of 22.13. Into the 100 free, Thompson held off Florida rookie Talia Bates by 0.05s to take another win at 49.65.

Florida teammates Rosie Zavaros and Vanessa Pearl put up top-five NCAA times in their respective wins during the meet. Zavaros first won the 200 back with a time of 1:54.94, which is fifth in the NCAA this year. Mizzou’s Jennifer King placed a tight second with a 1:55.02, ranking 7th in the NCAA. Then, Pearl popped a 2:11.60 in the 200 breast, now the third-fastest time in the NCAA.

In the 400 free relay, the Gator quartet of Sherridon Dressel, Talia Bates, Gabrielle Hillis, and Isabella Garofalo won with a final time of 3:16.93. Dressel’s lead-off 100 free time of 49.10 snuck her in for 9th in the NCAA.

The Mizzou men had a stellar meet against the Florida Gators, winning both the 200 medley relay and 400 free relay. Heading into the 1000 free, Florida distance ace Bobby Finke posted the second-fastest time in the NCAA with his winning time of 9:02.26.

After Finke’s win, the Tigers won 5 events in a row, all with new NCAA top-10 times.

In the 100 free, Florida’s Kieran Smith got the Gators back on track with his event win. Smith won the event in a 44.07, which ties his NCAA No. 4 time from last weekend and lifetime best. Teammate Marco Guarente also won the 200 breast for the Gators, putting up the 6th-fastest time in the nation at 1:59.95.

Mizzou senior Nick Alexander then highlighted the Tigers’ meet victory with his 2-for-2 event wins and top national times. Alexander first won the 200 back with a nation-leading time of 1:43.25.

In between Alexander’s double event wins, Micah Slaton went on to sweep the butterfly events with his 100 fly win. Along with his top NCAA time in the 200 fly, Slaton now ranks 4th in the nation in the 100 fly (47.29). Teammate Daniel Hein took second at 47.65, ranking 6th in the nation.

He then topped off the individual events with his 200 IM win, also snagging a top NCAA time at 1:46.52. Gator Kieran Smith took second in the event at 1:46.59, which is ranked second behind Alexander.

Up next for the Gators will be their home dual meet against the Georgia Bulldogs on November 1st. Mizzou’s next meet will be on the road when they travel to will face Missouri State on November 2nd.

Will they suit up for Missouri State? All dual meets I believe he said.

Kieran Smith is in line to have a huge year

It’s like racing someone with track spikes and you have on crocs. Of course they’re going to win…and not all schools that have the money want to use it towards suits. They’d rather it be used on better things like training trips, better equipment, etc. Let’s see how things go in February for them. LOL.

How are they cheaters? Suits are legal, all competitors have been told they are wearing tech suits this year. They are treating each meet like a championship meet to better prepare their swimmers for conference and NC’s, Every team has the opportunity to match suits with them, sounds like someone is a sore loser!

I don’t think you have described it correctly. Yes coaches can match it but it is an ideological choice. I think everyone likes an even playing field and not forced to go against their philosophy. I think everyone will look at the final results at ncaas to see if this experiment works. No one wants to go 12-0 in dual meets and then 20th at NCAAs with no drops. One also has to remember that many collegiate teams often put on suits for their Saturday practices so is there a difference between doing it just for practices and not for meets?

Dual Meets are practice for the Championships Meets. Numerous teams have Tech Suit practices and why, because you have to learn to go fast and even faster. Why, because we coaches want our swimmers to race at NCAA speed or World Record speed. Wearing a Tech suit and getting up on the block trying to get an NCAA cut is a lot more than getting up on the block and going for the first place points. Wearing the Tech suit is mental and physical training for pushing yourself to the max. Not wearing a Tech suit and pushing yourself to the max is mental toughness training. Each swimmer is different and needs different training programs. NCAA’s and the Olympic Trials… Read more »

It was a morning swim meet – 9″30 am CST. Florida’s meet against FSU is November 8th not the 2nd.

Suits vs No suits

Florida women suited up, men decided not to…

It’s only a dual meet.