Missy Franklin Will Train Under Dave Durden at Cal 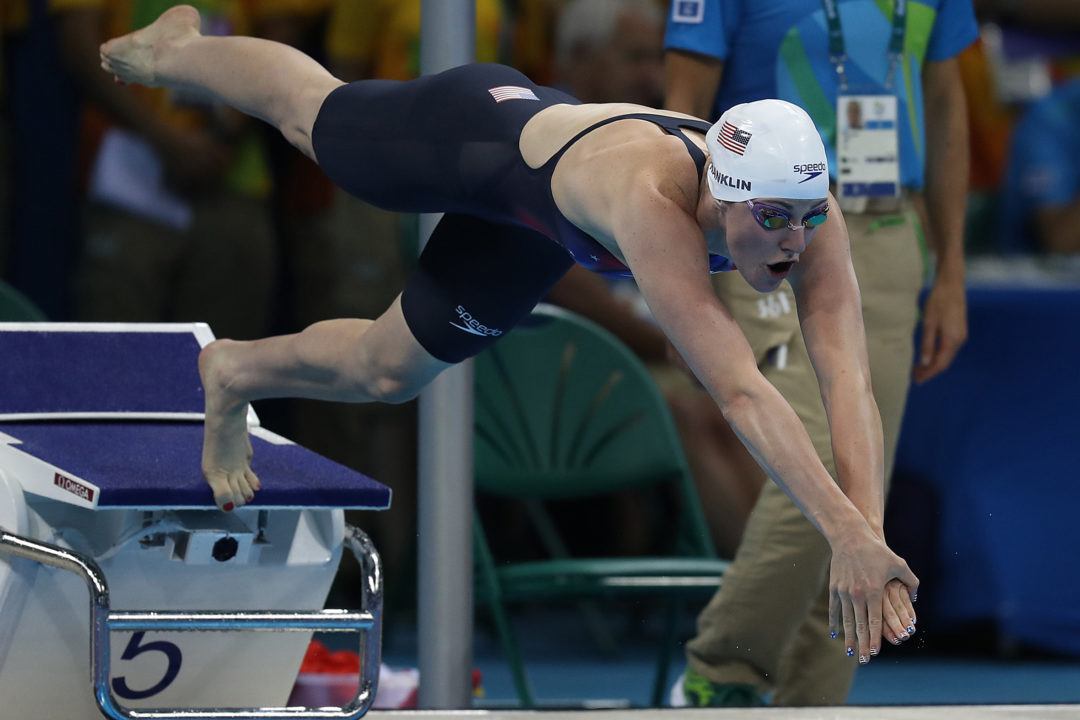 A month ago, Missy Franklin told Good Morning America that she would be returning to the University of California, Berkeley to resume her studies. She did not specify, however, where she would be continuing her training. Beginning last week, however, she was back on campus and training in the post-graduate, professional group led by Cal men’s head coach Dave Durden.

Franklin is the second high profile Cal women’s swimmer to choose Durden in Berkeley in recent times. Natalie Coughlin made the move in 2014 after over a decade swimming for Cal women’s head coach Teri McKeever. The move seemed to pay off in 2015 for Coughlin, who posted a lifetime best in the 50 free at that year’s Pan American Games.

2016 was another stormy for Coughlin, as she failed to make the Olympic team and added time across the board. She ultimately withdrew from the 50 free, her final race, at the Olympic Trials citing that she did not believe it would go well.

At age 34 Coughlin will likely face incessant questions about whether she is retiring. To date she has not signaled that she is stopping her swimming career, but where she will continue her training remains uncertain.

Durden is coming off a year in which his swimmers took seven medals in Rio, including three from current collegiate swimmer Ryan Murphy. He was recently named ASCA Coach of the Year for his accomplishments.

Franklin swam at Cal for two years as a member of the Women’s team under McKeever. In both years she set NCAA records, including a 1:39.10 performance in the 200 freestyle in 2015 that was more than three seconds faster than the 2016 winning time.

Internationally, Franklin struggled in her first year at Cal, coming away with only an individual bronze outside of relay medals at the 2014 Pan-Pacs. She rebounded in 2015, winning a silver in the 200 backstroke and bronze in the 200 freestyle, as well as posting the top American leg on the winning 4×200 free relay.

Franklin left Cal to begin her professional career in 2015, returning home to train with her club coach Todd Schmitz in the leadup to the Rio Olympics. Franklin failed to medal or swim on a night relay for the Americans in Rio.

Franklin is now banking that Durden can be the coach to help her turn her career around as she begins a new Olympic quad.

Both Durden and a representative for Franklin declined to give comment on the situation.

Missy passing up a chance to talk about her favorite topic, herself. First for everything.

One of the few (& rspidly declining) areas in life men can enjoy a male environment is sport . Now these guys will have to endure Miss Bubbles .

This is probably the most interesting comment in the thread. Everyone is focused on how the group will affect Missy but we should really flip it around and ask if she is gonna screw up the dynamic of the rest of the group. eh maybe this doesnt matter in swimming cause your head is underwater 90% of the time but as a low key laid back guy I would find her public persona rather annoying if she was in my lane doing the same shtick.

1) re:coughlin sometimes swimmers need change after long time with same coach, new spark etc might nothing to do with level of coaching per se

2) as I have always said with McKeever, where is all this hate coming from?

3) I remember back in old Floswimming days listening some current superstar coaches doing stuff or talking about stuff that did not make lick of a sense. And people were putting them in pedestal.

People always forget new saying “You know nothing, Jon Snow” Seems that some coaches know how to make them social media superstars but people really do not know what is the reality in the pool. You think swimmers really gonna spew truth as someone… Read more »

In other news, Manaudou takes a break from swimming (wise decision to come back fresh for Tokyo, he said he has learned from Ervin and MP) and wants to play handball in first French division. It looks hilarious but why not try? He has the body and the power to destroy some defenses. I hate handball but that’s funny he tries. Some Americans must wonder what is handball. I know it doesn’t exist in USA. At least seriously with a professional league. Or even in college. That’s why we never see a US team at olympic games in that sport except when USA hosts the competition. Too bad because I think they would be dominant like in basketball with their… Read more »

Missy needed a move. Nothing against Todd Schmitz who has built her and helped her to become the best female swimmer of the world between 2011 and 2013. But she needed to see other things and put herself in danger. Dave Durden is the perfect choice for that. She will train with the best male backstroker in the world and with men in general. What better way to improve her technique and especially her underwaters?
But….
But I also think that, more than a coaching move, the first thing Missy needs in my opinion is a 2-year break off the pools to refresh mentally and physically if she wants to shine in Tokyo in 2020. She looked burned… Read more »

“What better way to improve her technique and especially her underwaters?”

I remember someone bein’ pretty excited about how great her underwaters were gonna get under a different Cal coach.

(I just can’t stop ball-busting. Someone help me.)

I bet Durden did not have a choice . Janet told him to take her .

I think she should take the fall semester off. Do some dryland stuff and yoga. Clear her mind. Jumping right back in the water is a mistake and I was a bit shocked when she went on GMA a couple days after her last race and said she was gonna get right back to it. Maybe she will train for the 50/100 this year that would be a good idea to breakdown her racing skills and build herself back up.

as long as she has her missy start the 50 is lost from the start. even in the 100 she cant make it all up anymore (right now)

Hmm Dave is a choice of convenience, one i am sooo jealous of! He is an awesome coach, what i wouldnt give. But with all that said, by nature Missy is jit a drop dead sprinter, or power swimmer. I would think her best results would be with a Dave Marsh or Bob Bowman. She is not a technical swimmer as McKever and Durden are pretty much the best at those technical aspects and if it didnt take in those 2 wonderful years with Cal, i said she has tapped out on that. So focusing on her strengths which is her ability to hold her tempo and increase it at the end of the race, i think these coaches who… Read more »

Even if that is true, she wants to get her degree from Cal so not an option.