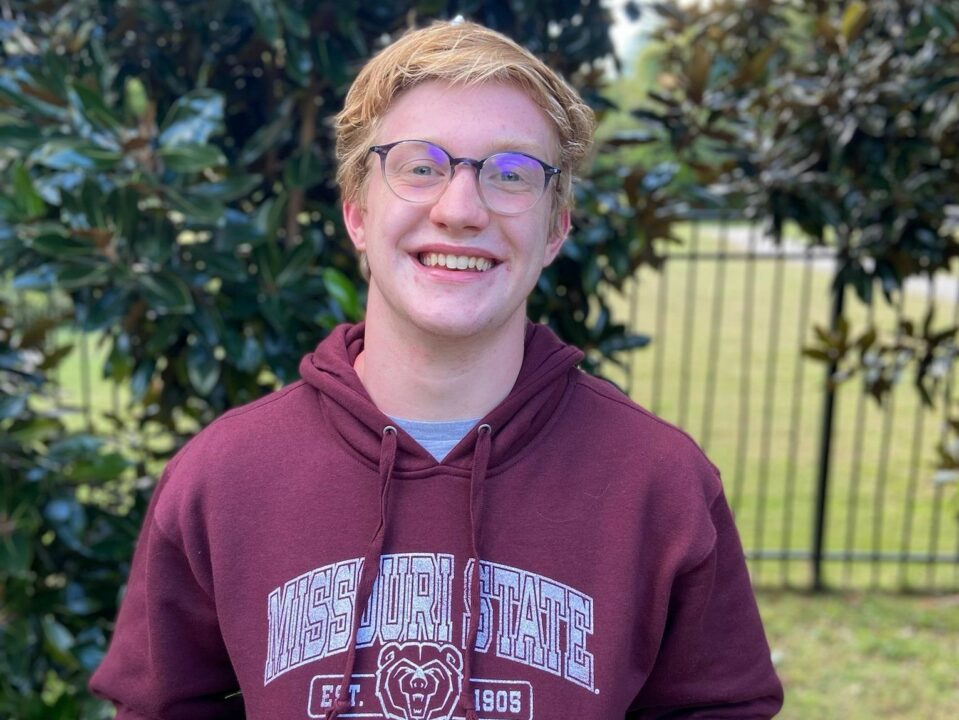 Fly and free specialist Chris Bedsole has committed to swim for Missouri State University beginning in the fall of 2022. Current photo via Chris Bedsole

Missouri State University picked up a verbal commitment from Chris Bedsole for its class of 2026. Bedsole is a year-round competitor at Hunstville Swim Association and he is in his final year at Huntsville High School.

I am so excited to announce my verbal commitment to Missouri State. HUGE thank you to all my friends, family, and coaches that helped me along the way! Go Bears!!

Bedsole is leading Huntsville High School in his third year as team captain. He was the leading point-scorer sophomore and junior year. He has made it back to finals at the Alabama High School Athletic Association State Championships every year. In his first season, Bedsole made it back in the A-final of the 50 and 100 free. He touched 7th in both events, picking up best times.

The following year, Bedsole finished 4th in the 50 free and 5th in the 100 free. He swam on his school’s 400 free relay and he led off the 20o medley relay that took home the bronze medal.

Last year, the Huntsville junior brought home two individual bronze medals. He clocked in at 21.54 in the 50 free for a new personal best time. He earned another medal, touching third in the 100 free in a time of 47.16. He anchored Huntsville’s 200 medley and 400 free relays, adding two silver medals to his name.

The Huntsville boys’ team claimed the 2020 State title. They were reigning champions, with their seventh consecutive Alabama 7A State win.

Bedsole will make an immediate impact on the Missouri State roster. During the 2020-2021 season, his best times would have made him one of the team’s fastest butterfliers. The Bears were the 2021 Mid-American Conference runners-up. Bedsole’s times would have earned him spots in the B-finals of the 200 fly and 50 free.

Missouri State will welcome Bedsole as a member of the class of 2026.