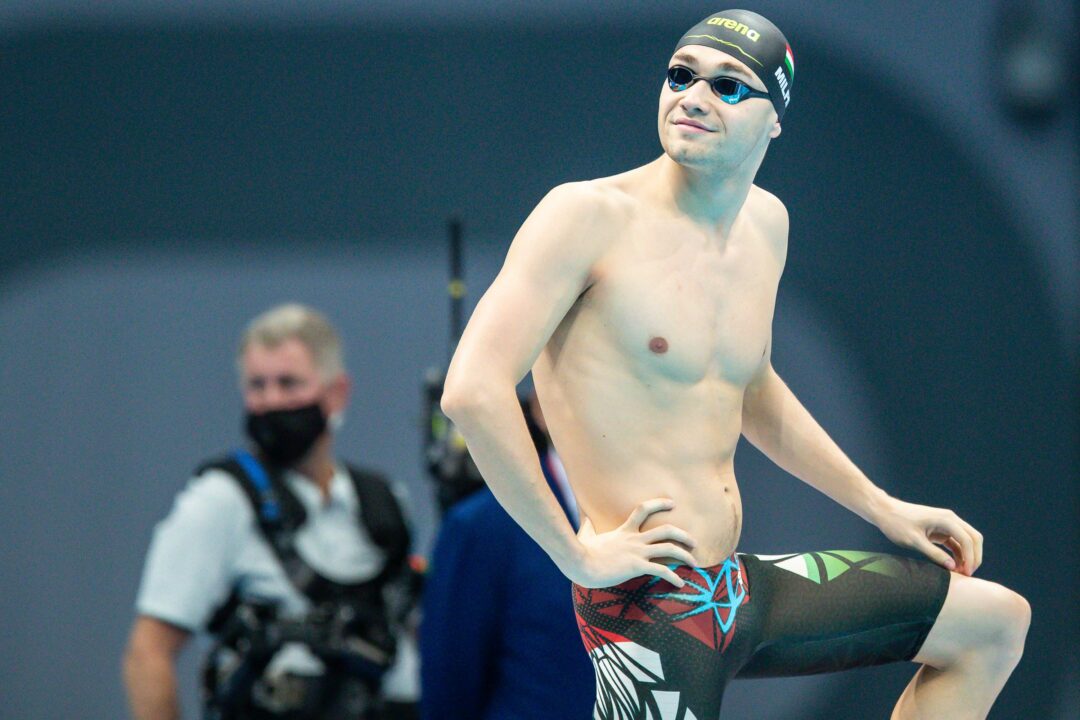 Olympic champion Kristof Milak doubled up on his 200m fly victory from last night at these Hungarian Nationals, taking the 100m fly in a speedy 51.03. Archive photo via Jack Spitser/Spitser Photography

The final day of the 2022 Hungarian National Championships saw Kristof Milak snag another gold, doubling up on his 200m fly victory from last night,

This time around Milak stopped the clock in a time of 51.03, beating the field by well over half a second. Bagging silver behind the Olympic champion was Hubert Kos, who touched in 51.88 while yesterday’s 50m fly victor, Szebasztian Szabo rounded out the top 3 in 52.06.

Milak’s result here checks in as a new season-best, beating out his 51.37 from Szeged just last month. In fact, Milak now moves up the world rankings to become the #3 performer on the planet so far this season.

Iron Lady Katinka Hosszu was another high-profile athlete to dive in on the final night, although the 32-year-old had to settle for silver in the women’s 100m fly.

Hosszu stopped the clock in 59.63 while Panna Ugrai clinched gold in a winning effort of 59.55. The top 4 finishers were all under the minute-threshold this evening.

The aforementioned Kos made it happen in the men’s 200m back, clinching the victory with a winning time of 1:57.64. That was enough to edge out Benedek Kovacs who got to the wall just .06 later in 1:57.70 while Oleksandr Zheltyakov was also under the 1:58 threshold in 1:57.84.

The FINA ‘A’ cut for this summer’s World Championships sits at 1:58.07, so all of the 3 top finishers all dipped under that barrier.

So he’s going sub 50 at worlds. Dressel will too. It will be a close battle. Will Milak reel him in?

I think it’s obvious he’s focusing on his speed this year with the aim of keeping within enough distance of Dressel on the first 50 to strike back on the second 50.

He might have a shot this year. Let’s see if Dressel can win or lose the double for the third time at worlds

Huge PB for Kós Hubi in the 200 back, he dropped 5 seconds! Yesterday he swam a PB in 400 IM as well (more than 2 seconds), 15 year old Molnár Dóra might have a bright future in backstroke, at least in Europe.

Dressel in trouble from Milak and Liendo

from Milak. He isn’t in trouble from Liendo.

The lengthy and persistent underestimating and ignoring of Liendo is interesting. 🧐

Not really an underestimation. Both dressel and Milak have gone under 49 before, and will be sure to repeat that at worlds. Liendo has just recently broken 51 and sure he’s young and improving, but so is milak. We can’t really expect liendo to drop enough time at worlds to contest for first with dressel and milak

you guys are overacting to his times. There’s a high chance he is tapered and besides dressel is way faster than him untapered. You guys need to stop hyping him like he’s the next big thing. Hype up Popivici if your looking for fast young talent

Hahaha. Are you bitter, because Milak is in the spotlight and your Popovici isn’t mentioned enough? Geez..

I wish there was a RemindMe! function on the SwimSwam comment boards!

Milak will beat Dressel in Budapest.

Well not based on this preformance but he’ll get better for sure, question is by how much cos he’ll need to be 1.5 sec faster at least to do it.

Assuming Dressel is going to match or break his world record is a bold call after he’s had a significant post Olympic break.

He has a lot of room left after those awful walls in 2021. I think he can match it for sure. Breaks are good.

Do people just put the blinders on and forget about Dressel’s hilariously awful turns in that swim?

It’s also funny watching everyone count him out for a post Olympic break. Dude’s a sprinter, not a 400m specialist. Last I checked, some guy named Phelps took an extended break after 2008 and broke two world records in his pet events in 2009?

With that logic, dressel won’t beat milak. His performances earlier this month and earlier in the year are shocking

Didn’t you notice how slow Dressel has always been in season? He’s gonna step it up big time when WC comes and as some others have pointed out his 100fly in Tokyo wasn’t really a perfect race.

I know dressel drops bombs when tapered. I’m just using the logic the dude used against him because it’s bad

meh 50/50. Dressel had terrible turns and touches in Tokyo. He still has a lot of room but sure let’s count out the World record holder, current world champion, current olympic champion and someone who has won in loads of sticky situations and races.

There was only one turn.

Any excuse lol. I bet Dressel would have broken the 50 free WR if not for his terrible turn there too lol

Chalmers would of beaten Dressel if he had a better start

“would of” ? made even worse by the fact you’re replying to someone using “would have”

i made a mistake i meant his touches/turn