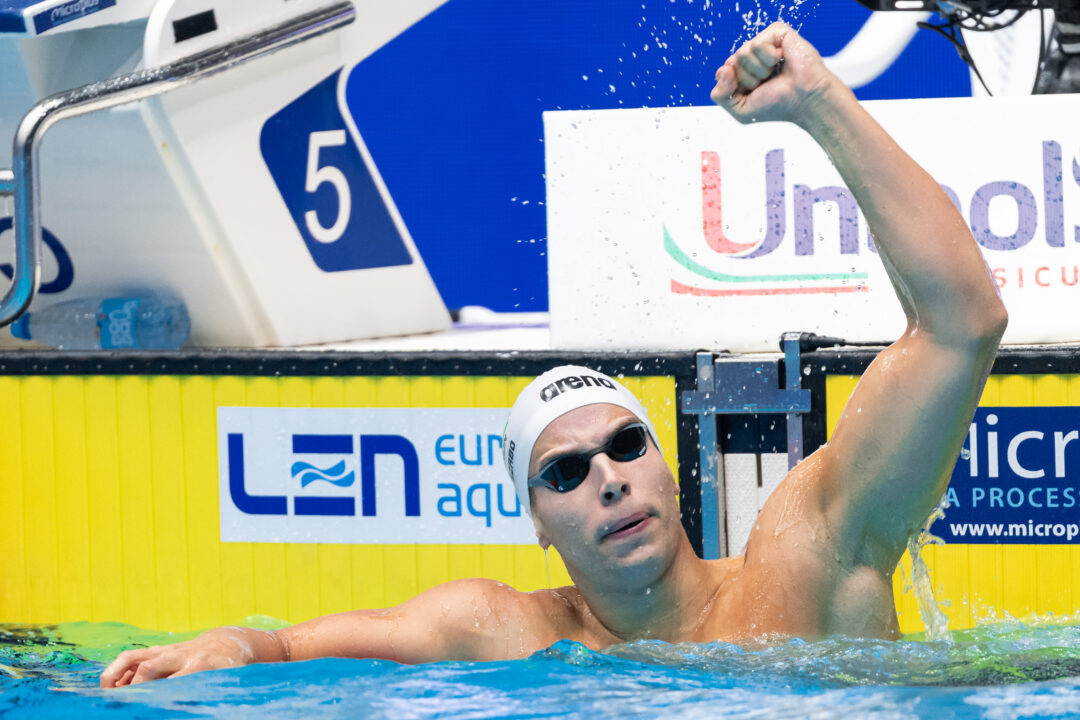 Although he cited having been ill for a week recently, Olympic champion Kristof Milak was back in the water for day 3 of the 2022 Hungarian Swimming Championships.

After having reaped 200m fly gold and 50m free silver last night, 22-year-old Milak took on the 200m free and 50m fly to continue his campaign here in Debrecen.

Milak was ultimately relegated to a pair of silvers on the evening, as it was fellow Olympian Nandor Nemeth‘s time to shine tonight in the men’s 200m free.

Both men have already qualified for this year’s World Championships in this 2free event.

After the race, 22-year-old Nemeth stated “That I won and beat Kristóf and became the national champion for the first time is just icing on the cake. ”

Padar said post-race, “It was a very good swim, I really enjoyed it. I have made a lot of sacrifices for this result, thank you very much to my coach for helping me with this. The plan was to start the first hundred at 57.5 and make the third fifty the strongest. I listened to him.”

Szebasztian Szabo made some noise in the men’s 50m fly, logging the #2 time in the world this season. The reigning European champion in this event logged an effort of 23.08, beating Milak who touched in 23.56.

Both men dipped under the World Championships qualification time of 23.63, with Szabo’s result coming within .12 of his own lifetime best of 22.96 from December 2020.

Szabo sits only behind world record holder Nicholas Santos in this season’s world rankings in this men’s 50m fly event.

Szabo said of his performance, “I always say it could be even better, but I think it will! That was enough for this competition, good in the first place, and even better for me to see where I stand.”

Iron Lady Katinka Hosszu followed up on her 200m fly victory from last night with a convincing win in the 400m IM this evening.

32-year-old Hosszu posted a time of 4:38.89 to top the field here by nearly 9 seconds, registering her fastest time of the season in the process.

Entering this meet, the multi-Olympic champion’s quickest thus far rested at the 4:39.19 she raced in Stockholm last month. She now ties Amerian Leah Smith in slot #7 on the world rankings for the season.

Hosszu recognized the fact she was slightly faster here than in Stockholm, saying, “I was very tired today. Even though I was tired, I managed to swim better than two weeks ago in Stockholm. ”

Pic above is not Nandor

HUN is an official abbreviation for Hungary though…

HUN is also the official FINA abbreviation for Hungary.

Kós’s time was not 4:17.42. He swam 04:13.50.
Verrasztó finished fourth.
Although, Bernek has a qualifying time in this event, he retired last year and works as the coach of Ajna Késely.
Nevertheless, Hungary has at least four other men with FINA A standard, Verrasztó, Holló, Kós and Telegdy.

We can’t really say much if mcintosh will be able to reproduce that 4:29. She hasn’t really popped anything close to that since

I knew the downvotes would come. People really take these comments a bit too seriously