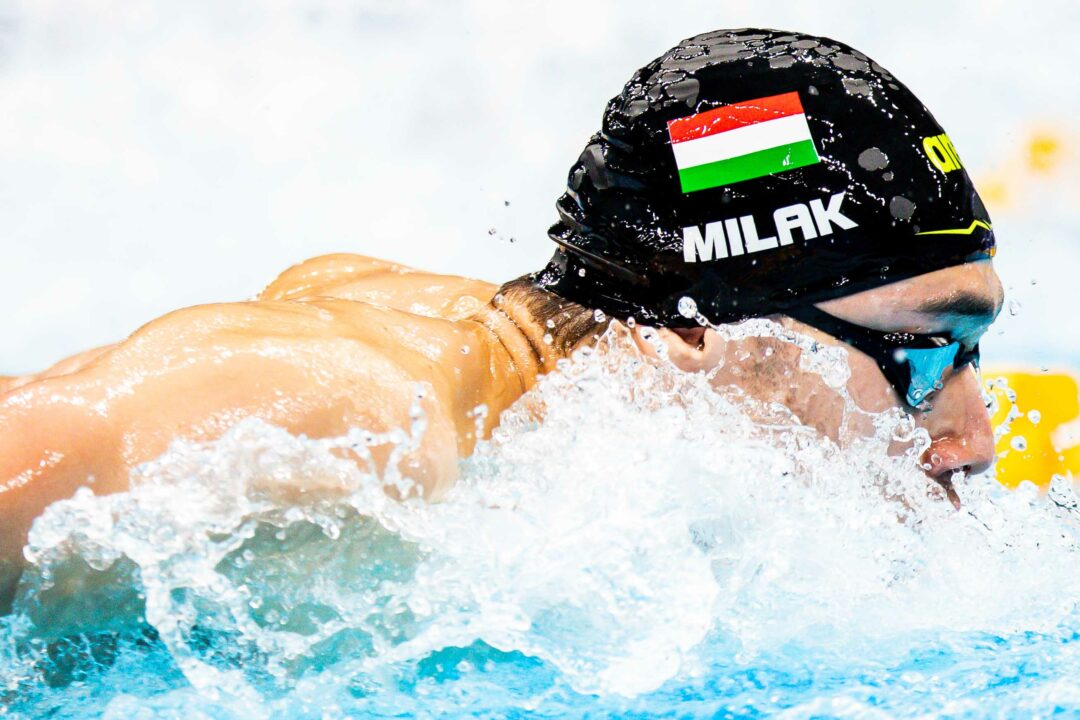 After day two of the 2022 Hungarian National Championships, we saw a new world rankings leader in the men’s 200m fly, courtesy of Kristof Milak‘s time of 1:53.88 here in Debrecen.

The reigning Olympic champion and world record holder in this event demonstrated his dominance early, putting up a speedy 1:56.21 in the prelims. Then tonight, opening in 53.93 and bringing it home in 59.95, Milak once again set himself apart from the field, with his 1:53.88 head-turner beating his peers by well over a second.

Runner-up status in the race went to 25-year-old Tamas Kenderesi, the man who snagged 200m fly bronze at the 2016 Olympic Games in Rio.

With his result here, Milak now overtakes Japan’s Olympic silver medalist Tomoru Honda in the season’s world rankings, owning the only sub-1:54 outing on the planet.

On the women’s side of the house, Iron lady Katinka Hosszu bounced back from her 200m IM defeat on night 1 with a victory in the 200m fly this evening. Punching a time of 2:09.38, Hosszu represented the only racer to get under the 2:10 threshold, although there were 4 women in hot pursuit to the wall.

Hosszu entered this meet with a season-best effort of 2:10.83 posted in April at the Stockholm Open, so the 32-year-old multi-Olympic champion dropped over a second en route to victory this evening.

Both men registered personal bests in the event, with Szabo getting under the 22-second barrier for the first time in his career. Entering this meet the former Serbian swimmer’s lifetime best rested at the 22.28 he produced in December of 2020.

As for Milak, his 22.19 actually ties his PB, with his previous effort of the same mark having been logged at this same meet last year.

Hopefully Milak can peak at Paris. I beleive he can go 1.49 there if everything goes well. Honestly he could just slam something at home worlds this summer.

Milak has was plagued by fever earlier this month at his training camp in Tenerife, so he is – according to himself – not at 100 %, also why he has dropped the 400 free.

If anyone else went 1:53.8 in 2 fly this comment section would be a little more busy, he’s making it pedestrian for him.

41
0
Reply
There's no doubt that he's tightening up

Actually Honda was 1:53.87 at the Kitajima cup earlier this year, so 0.01 faster than Milak’s time. https://swimswam.com/ikee-nakamura-honda-all-capture-gold-on-kosuke-kitajima-cup-day2/

There is no clue Honda will drop so much time. He didn’t drop a lot from trials to Olympics last year. I think 1:52 high at best.

It’s just a vibe. My vibes are often wrong.

Interestingly enough, currently Honda sits at #10 in performer all time in short course and long course

Milák was ill just before the Nationals, and anyway,there was no need to swim big times in April, if he stays healthy, he will go faster in June, don’t worry. Honda had to swim fast already in January, there are so many excellent Japanese butterfliers, they are always under pressure to produce swift times to get selected at their Trials. Hungarian swimmers, including Kristóf, are in a training phase, noone is peaked. except for those, who wanted to reach the qualifying A times.