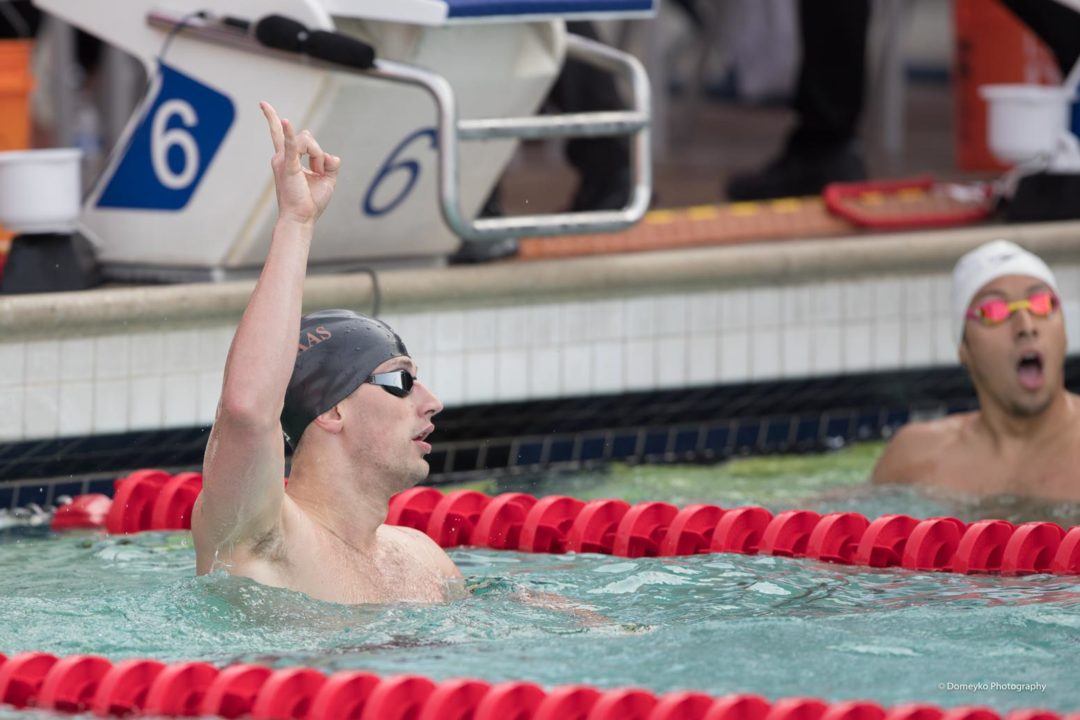 Miguel de Lara cut another half-a-second off his Mexican Record in the men's 200 breaststroke on Thursday night in Lima. Archive photo via “Rafael/Domeyko Photography”

Mexican swimmer Migue de Lara re-broke his own Mexican National Record in the 200 meters breaststroke on Thursday at the 2019 Pan American Games when he swam a 2:11.23 for a bronze medal in finals. His countrymate Mauro Castillo Luna took 4th in 2:12.21.

De Lara’s swim broke his own record of 2:11.77 that was set at the 2018 Central American and Caribbean Games in Colombia.

De Lara’s bronze medal is just the 3rd-ever by a Mexican swimmer (male or female) at the Pan American Games in a breaststroke event. The last came in 1975, when Gustavo Lozano took bronze in this same 200 breaststroke (in 2:29); a year earlier, Felipe Munoz took silver in the 200 breast (in 2:27).

Luna is a former Mexican Record holder in the event and is the country’s 2nd-fastest man ever in the 200 breaststroke.

De Lara’s bronze medal is just the 3rd-ever by a Mexican swimmer (male or female) at the Pan American Games in a breaststroke event.

Mexico has won several other medals in non-breaststroke events (including gold in the 200 fly in 1955). In total, Mexico had 43 medals coming into this year all-time in the Pan American Games.

Pretty sure that’s the wrong pic

Maybe hookem’ Horns was adopted by the Mexican national team?

Impposible… half of the mexican team is from A&M (almost literally) No horns allowed!

Good on him but not sure a 2:11 would even make semis at Olympics next year .. he needs to look at high 2:09 I would think as his next goal