Michael Phelps Readies for 200 Fly, His First Race in Omaha 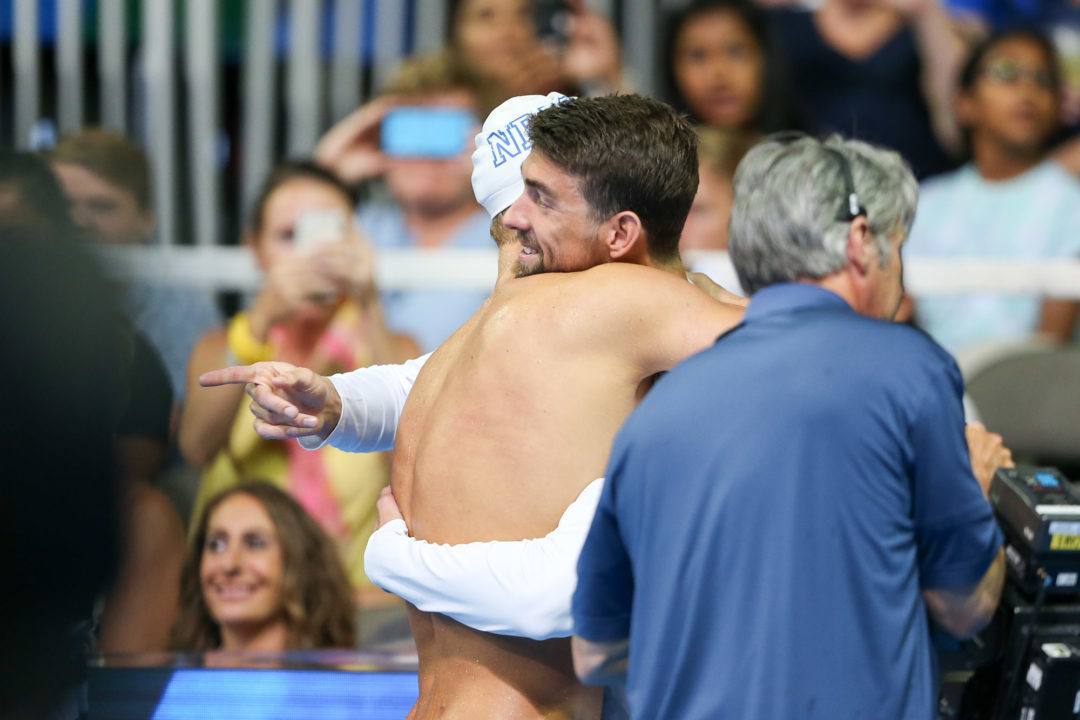 Phelps (above) embraces his training partner Chase Kalisz after the Georgia Dawg punched his ticket to Rio in the 400 IM. Current photo via Tim Binning/TheSwimPictures.com

Two days are down in Omaha at the 2016 U.S. Olympic Trials, and Michael Phelps will finally get in for his first race of the meet with the 200 fly prelims.

Phelps scratched the 200 free prelims yesterday morning, making the 200 fly his first race. He’s the top seed, and will be swimming out of lane four in heat nine. Club Wolverine’s Kyle Whitaker and SwimMAC’s Tyler Clary will flank Phelps in that heat, though Jack Conger is the favorite to get a top two spot with Phelps in the final. Conger is in lane four, just one heat before Phelps.

The women’s 200 free, which will feature a blockbuster matchup between Katie Ledecky, Missy Franklin, and Allison Schmitt, also has prelims this morning. They’re the top three seeds, so they’ll be in lane four for the last three heats– Schmitt in heat nine, Franklin in heat ten, and Ledecky in heat eleven.

Leah Smith, who was stellar in her 4:00 400 free last night, is actually looking like a sneak pick to join Ledecky in the 200 free top two if Schmitt and Franklin swim as lackluster as they did last night. Smith is in lane five in the last heat, right next to Ledecky.

The third and final prelims event is the women’s 200 IM, which will feature 400 IM champion Maya Dirado from night one. Ella Eastin, who was off of her best in the 400 IM, will try to bounce back and make a claim for a top two spot in the 200 IM, arguably her better race. She’ll be in the final heat next to Dirado, with 400 IM 3rd-place finisher Bethany Galat also in that heat.

not too sure schmitt was “lacklustre”, she took it out in the way she would have to if there was a chance to get into he top 2. She ran out of steam, it happens. Missy on the other hand seems to just not really get going

Very true! She swam a very controlled 4:06 in the morning and said it was the easiest 4:06 she had done. However, when you’re in a race that fast, there’s really no other way to do it then to just go for it and see what happens.

Leah beat Schmitt’s best time (4:01) so Allison would’ve had to do something special. It’s awesome to see Allison out there competing and I hope she can grab a relay spot.

That is understatement. It is the worst app I have used. The results and heat sheets are not up for hours, it crashes constantly and tells you” you are not allowed to write..” which makes it impossible to see anything within the app.

Tabitha and Suzzie2012, sorry to hear you’re having a bad experience with the site. We fixed a few issues last night, so hopefully it’s working better for you now. If not, please email us at [email protected] and we will assist you right away. You can also call me directly at 215-353-0948.

Here’s the perfect recipe for inducing fits of rage: Hide splits so that you have to click. each. swimmer’s. name. to see what should already be displayed. Then put some splits behind a paywall. Also a perfect recipe to get users to swear off the app forever.

Abbott, on the web, you can see all splits for free. On mobile, you can click on the time and the splits for the race will show up for you. Clicking on the athlete’s name takes you to their profile and “meet story” (what they’ve swam, what they’re swimming, etc.), which is a premium features.

But you can access all splits without paying the $5 🙂

If you have any other questions, just let me know and I’m happy to help!

My mistake. I was having to click on 400free results to see the splits, so I was autopilot clicking swimmer names on the shorter races not noticing the splits are next to the names for those. Thanks

No problem! For the longer races, it’s hard to fit all the splits on the same row as the name and final time, so if you click on the time (not the name), then you’ll see the detailed splits show up below. Click on the time again and the row closes back up.

Hope this helps, and thanks again.