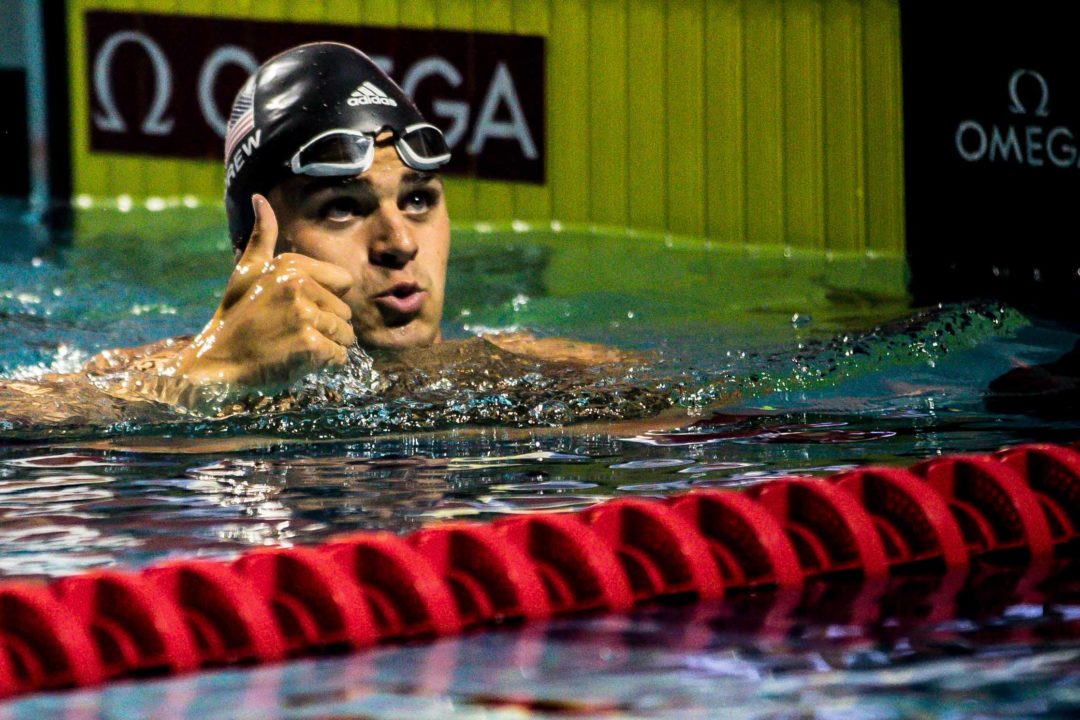 World Championships medalist Michael Andrew had a big swim on Saturday night at the 2020 Pro Swim Series in Des Moines. Andrew raced to a 1:56.83 in the 200 IM, finishing over a second ahead of the field. That dropped over half a second from his former best. NCAA Champion Andrew Seliskar took 2nd in 1:58.01, taking a couple of tenths off his lifetime best from 2018.

At a minimum, Andrew’s closing split is over a second behind any of those swimmers’ splits from Worlds. He did come home a bit faster with his old lifetime best, with a 30.00 on the final 50. At 20 years old, Andrew is now the 6th fastest American in history. He’s the 6th fastest swimmer ever worldwide among swimmers 20 and under behind Kosuke Hagino, Phelps, Abrahm DeVine, Qin Haiyang, and Seto. World Record holder Lochte was a 1:57.79 at Andrew’s age.

I have watched MA for years..his potential is unreal! Yet , as a coach, seeing 30. Free splits on his 2 IM is nuts! I kinda wanna say it is time to change something up if he wants the 2 IM..a WR is very possible..grrrrrr

I’ll be honest, this performance definitely ups your odds in our bet imo 🙂

Yeah, but I’m nervous that he’ll overextend himself and try to swim all strokes + IM. He is a good guy and an inspiration to my DD so I really do hope he makes it to Tokyo. The only event that I feel really good about for him is the 100 Breast as it is fairly early in the schedule for Trials.

I think you’re right here about over-extending. His breaststroke looked good this past weekend. I think he dropped about half a sec in the last OTs which if he manages to do here would put him high 58. He he can do that in the final hell def. be in contention.

Theory: His arms to torso proportions are so far off that he can’t he physically can’t breathe properly in freestyle.

I think he just breathes late.

Can someone call Johnty Skinner to fix this mans breathe?
The country’s 2IM legacy hangs in the balance

Most like him well enough. Has he ever done or said anything inflammatory? I honestly don’t think so, but don’t care enough to know.

The fact that USRPT is beaten over our heads by his handlers makes people sort of want him to prove it, rather than talk about it. So far he hasn’t proven it.