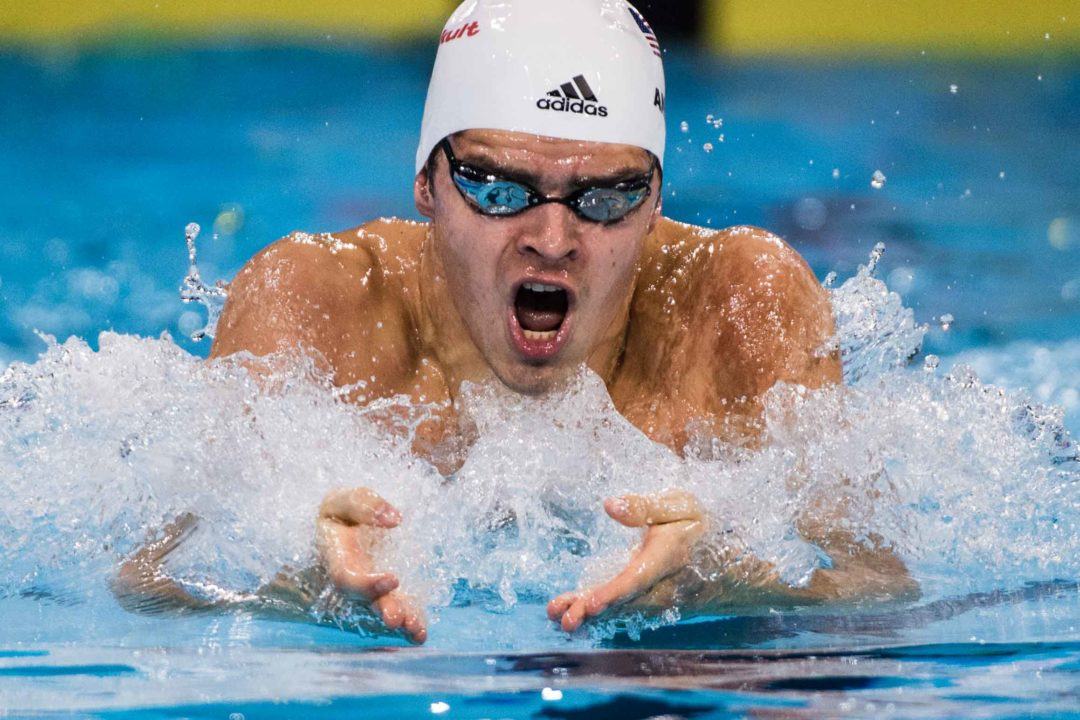 Josh Prenot clocked 1:58.9 this morning in the 200 IM for a new meet and pool record at the Atlanta Classic.

Josh Prenot took the top seed in the men’s 100 breast at day 1 prelims of the Atlanta Classic.

Just one week since the Arena Pro Swim Series in the same city, the 2017 Atlanta Classic Swim Meet kicked off today at Georgia Tech’s McAuley Aquatic Center. The first day’s prelims already saw top names such as Caeleb Dressel, Ryan Held and Amanda Weir take to the pool and they carried top billing into tonight’s finals as well. On the whole, day 1’s finals were slightly lackluster in terms of any big swims, but this is merely indicative of where athletes are at training-wise now into this long course season with U.S. Nationals in sight.

Florida Gator and 2016 Olympic gold medalist Dressel pulled the double tonight, taking on both the men’s 200m freestyle and 100m butterfly. In the former, Dressel moved up a spot from his 6th place-garnering morning outing, finishing 5th with a time of 1:51.47 to warm himself up for the sprint fly later in the session.

Taking the mens’ 200m free was Gator teammate and Italian national Mitch D’Arrigo. The 22-year-old notched a winning time of 1:50.12 to hold off two charging men in the form of Wolfpack swimmer Anton Ipsen of Denmark and Zach Apple of Auburn. The duo finished in 2nd and 3rd with respective times of 1:50.61 and 1:50.93.

Dressel’s 100m butterfly was where he struck gold, taking the event with a time of 53.97 to drop a .73 off of his morning swim. He was the only swimmer to go sub-54 in the event tonight and his performance ranks as the 7th fastest of his career. Dressel has only been beneath the 53-second barrier 3 times, with one of those being his Olympic Trials swim from last year.

Olympic teammate Held was also in that 100m butterfly race having clocked a morning time of 55.09 to establish himself as the 6th seed. Tonight, he wound up touching in 54.51 for 5th, albeit with the 2nd fastest time of his young fly career.

Olympian Josh Prenot was also in the Georgia Tech pool tonight, racing against domestic 100m breaststroke nemesis Michael Andrew. The two dueled at the Arena Pro Swim Series in Austin and were head-to-head tonight, with the Race Pace Club representative Andrew taking the win in 1:01.66 to Prenot’s 1:02.13. Both were off their fastest marks of 2017 from the Austin meet, where Prenot touched in 1:01.03 and Andrew in 1:01.20 for 2nd and 4th places.

Isabel Ivey was the only woman to venture into sub-2 minute territory in the women’s version of the 200m freestyle, stopping the clock at 1:59.90 to take the gold. 31-year-old Amanda Weir finished 4th overall in the event with a modest outing of 2:01.53.

Kentucky’s Asia Seidt pulled the 100m butterfly/400m IM double, winding up in the final of each from this morning. In the women’s 100m fly, Seidt finished 3rd overall in a time of 1:00.75, while Isabella Gati and Alyssa Tetzloff finished in 1st and 2nd with times of 1:00.36 and 1:00.44, respectively. Gati, of Nation’s Capital, is just 17 years of age and just scored the best time of her career with her outing tonight. Her time falls within the top 75 of the US best times for the women’s 17-18 age group.

Seidt also placed 2nd in the 400m IM in a time of 4:47.28, just over a second behind winner Emma Barksdale of Gamecock Aquatics. Barksdale won gold in 4:46.37, dropping almost 3 seconds off of her morning swim.

Those live results are impressive…..

Dressel in mode Gators training meet. Nothing to expect from that meet in terms of times.
Good win for Isabel Ivey in the 200 free under 2 minutes.
Better showing from Michael Andrew in the 100 breast. Good for his confidence before world trials.

It wasn’t televised and we didn’t miss a thing. Very slow thus far. ?

lol it’s not a big meet.

Very heavy training in prep for Trials, a training meet only I would say.

No more heavy training than the swimmers last weekend at Pro Series! I am impressed with Dressel if he was in a practice speedo!

It’s not a Grand Prix, a lot of club and college kids are there. Heats full of Pros were last week. Don’t know of anyone trying for personal bests with WCT right around the corner

It’s a 100% training meet all the way, nothing more than that. It’s a set up meet for the Workd trials.

What was “impressive” about Caeleb Dressel’s swim? 53.97 in the 100 fly? 🙂
Anyway I don’t care about times for him at that meet. Just a training meet.