Merry Xmas from Gary, Dave and a Special Guest 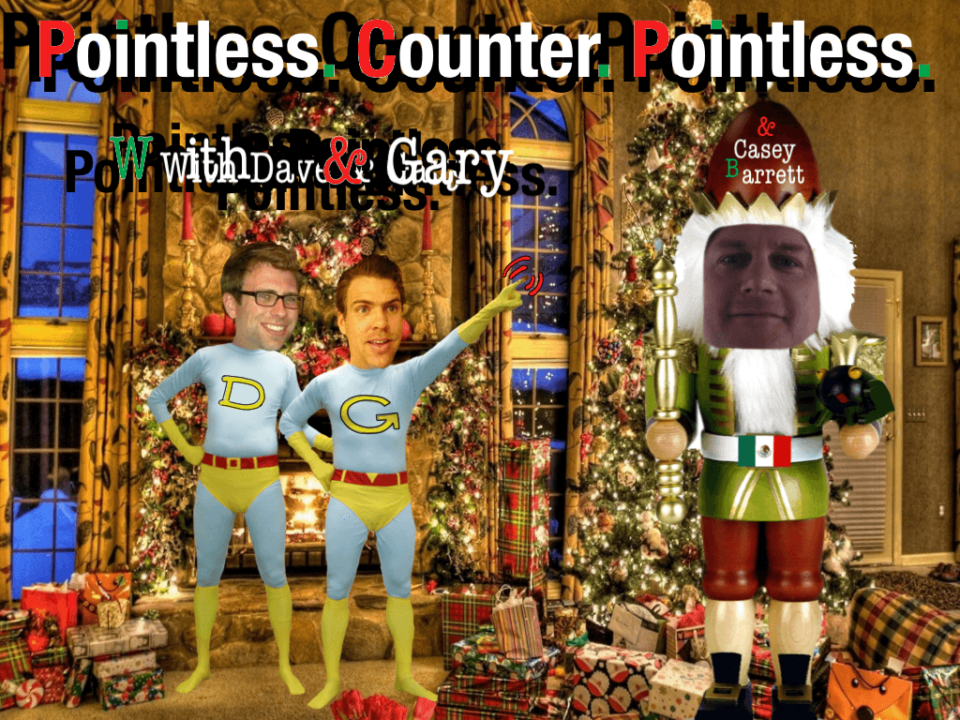 Casey Barrett is not only a guy that lives in New York, but also an emmy and peabody winning writer for NBC. And he swam in the Olympics. No, no, he's not an annoying go-getter, actually he's totally relatable.

Less Is More: Over-Trained and Under-Rested

“When I started on this less-is-more-swim-different journey almost four years ago, I had one goal: break :55 in the 100 yard breaststroke.”

David: Gary, mind your manners today, we have real royalty with us.

Gary: David, you nutcracker. You’ve got the sense of a teenaged idiot. That huffs gasoline. In the rain without a jacket on.

Casey: Hey guys. Merry Christmas. Gary, thanks for the plug. As agreed, a shipment of non performance enhancing drugs is on its way.

Gary: For the record I just want to be clear, I don’t do drugs. I do suppositories.

Casey: David, last time I talked to you, we were working on that sinking ship called Swim Network.

David: Oh yeah, I fired you. Wait, you quit, I was fired. Er, can we have Gus Gustafson clarify?

Gary: Was I the only idiot that didn’t work for Swim Network? Why don’t people take me seriously?!

Casey: We only hired drug users.

Gary: Let’s pull our fingers out of absurd for a second…

Gary: Casey, you’ve dedicated your life to championing the sport of swimming. Imagine Swimming has taught tens of thousands of children to swim. You swam in the Olympics. You wrote NBC’s swimming coverage of the Olympic Games and a bunch of other stuff. You even won a Peabody award, whatever the hell that is.

Gary: Your perspective of the sport is as intimate as my finger and absurd. However, let’s face it, you piss a lot of people off with your Cap n’ Goggle articles.

Gary: How have you maintained prestige despite being openly (and sometimes harshly) critical of certain aspects of the sport? Particularly when those aspects belong to a Michael Phelps or Speedo or USA Swimming or NBC.

I can only imagine the maelstrom to result from sticking my finger in USA Swimming’s asspects.

What is that? Masochistic, self-destructive behavior (you swam the 200 fly and 400 IM too) or journalistic integrity? And how is it that you’re able to pull it off without being permanently blacklisted from the sport?

Casey: It’s probably a form of mental illness, having that need to provoke. Many writers have it. It’s not healthy to idolize someone like Hunter Thompson, but I blame him. He showed me it was possible to write the truth, without being afraid of who you might offend in the process. But to answer your question, I think I get away with it because I try to be honest and back any opinions I might have with plenty of facts. Even if you disagree, hopefully readers see that it’s coming from a valid place – and that I’m not looking to make enemies.

David: Gary compared us to Hunter S. once… I thought it was a bit far-fetched for a plogger. That said, I do respect criticizing your employer. The guy at Arby’s is a dick to me, and I just take it.

Gary: You take his roast beef for some cheddar?

Casey: That’s some good beef. Lucky for me, I don’t have an employer. Freedom of speech gets a lot easier when you’re your own boss.

Gary: It’s understood that you love the sport and that your appropriate criticism is intended to be constructive. What’s the worst thing happening with our sport today?

David: (Sudden hysterical weeping) When. Will. It end, Lord?! When will it end??

Gary: (Waving tazer in David’s face) You want this again? Your want another 50,000 volts? Stop crying or you get zapped.

Casey: Still a lot of nervous coaches out there, with some deep dark skeletons in their closets.

Gary (spiking his vodka with gin): Okay. This is what I appreciate. A willingness to address uncomfortable topics that need to be addressed. We need to rip off the band-aid to let the wound heal. The band-aid isn’t covering up that festering pustule anyway.

And what better time than the present, Christmas, to talk about pedophilia?

David: Or we could just talk about Christmas?

Gary: DAVID!!! Is that you?! Have you fallen prey to Holiday Madness? Where the [expletive removed] are you calling in from? Jail again probably. The bus depot bathroom? Or from the gutter if you’re mother’s lucky. Because bails don’t post themselves. Come back from your holiday bender and join us in a grown up conversation. [Expletive removed]!

David (changing subject): No man, I agree with everything you two idiots are saying. Further, I think humor is – for better or worse – often a good way to deal with uncomfortable topics, like child rape. But, if I’m honest, it’s hard for me to joke when I see the words “child rape.”

Casey: You remember those “Dead Pools” – how people in poor taste used to bet on when certain celebrities would die? Should we form a Skeletons Pool, betting on which coaches will be accused next?

David (changing subject again): Sorry, I was watching Jim Carrey’s breakthrough performance from that movie. Did I miss anything?

Gary and Casey: (shake heads and stare into space)

David: Cool. Anyway, Casey, I am curious about one thing. Swimming. It’s great. I love it. I did it. I do it. I like talking about it. I like a lot of other things too.

Don’t you get bored? I’m not trying to give you a meatball question… I’m unaware of one thing you do outside of swimming. In your spare time, away from swimming, you write a blog… which is where I found out that in your spare time you go swimming with your daughter.

Casey: Are you calling me a Wet One Trick Pony? We all spent most of our childhoods staring at a black line on the bottom of a swimming pool. Clearly, boredom is not an issue. But I’m proud to say I have many other interests outside the pool. Like, um… Um… Um…Gambling. And drugs.

Gary: The Michael Phelps circuit! You guys should hang out. Or open a learn to swim school together! Sometimes I think we might be taking this ghastly anti-hero shtick too far. We’re terrible…

David: I’m just saying man, you guys are freaks. But not like cool “I’d trade my Boba Fett for that” kind of freaks. I knew a guy who really loved one thing and one thing only. That was heroin; he’s dead.* On the other hand, take me, I have soooo many interests. Everyone’s always talking about it, “Dave, that dude is amazing; he’s so dynamic.” Around the water coolers people are always saying…

Gary: OMG!!! Is Dynamic Dave going to drink coffee today? Or will it be tea? God, he is SO dynamic! You just never know! Is he going to spend quality time with his right hand or his left hand on his coffee break? Or will it be his tea break?! So mysterious! SO dynamic.

…And why is he always covered in roast beef juice?

Casey: On that note, I think I’m gonna go sit underwater until I pass out.

David: I uh, well, nobody has ever out-Gary’ed Gary, Casey. I think that’s our sign to flush another column down the toilet.

*David is a middle class white kid and is lying: he does not know one hard person.

Yay, Casey’s blog! (Except this post. That one made me make 10,000 word comments that never made it past moderation.)

Well, that can be said of some of the swimmers of Los Angeles County feature here, not too many Spanish surnames yet most of the kids of La County about 55 percent looked like Water Polo player Brenda Villa, so David is in good company.