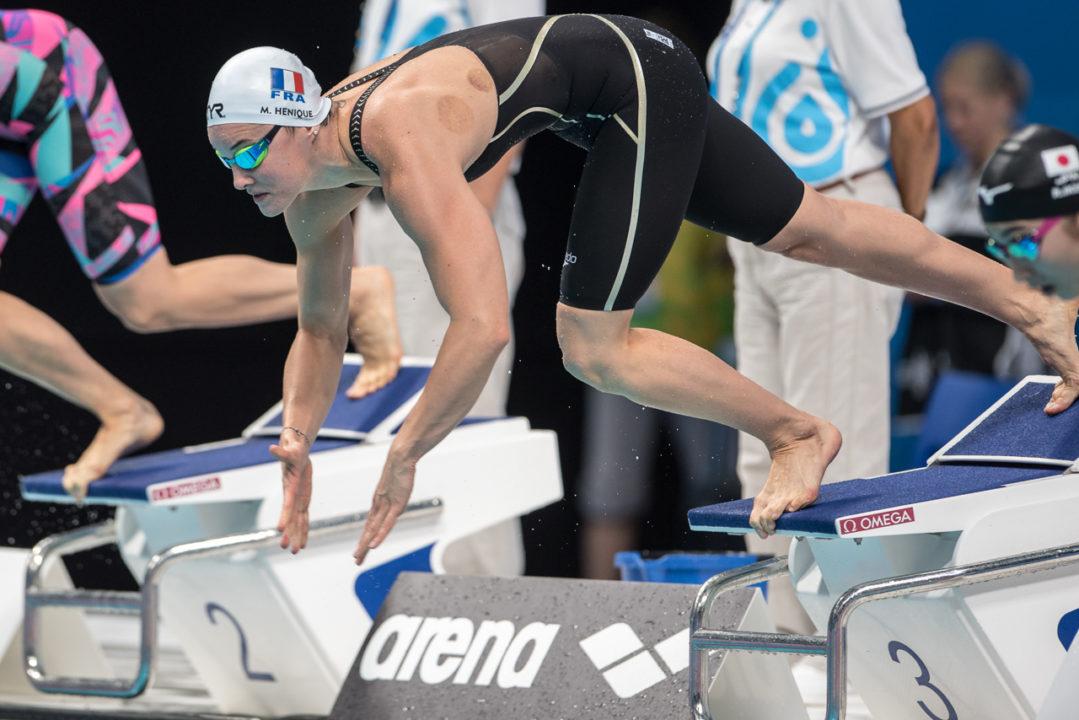 France’s Mélanie Henique broke the French national record in the 50m butterfly in Budapest, clocking a 25.63 in the first semi-final heat on Friday night. It was her best time by 0.18, and .14 faster than the hours-old national mark set by teammate Béryl Gastaldello in morning heats.

Prior to 2017 World Championships, the French record had been 25.84, established by Henique last April at 2016 French Nationals and Olympic Trials in Montpellier. On Friday morning, both Henique and Gastaldello went under that time with personal bests. Henique turned in a 25.81, while Gastaldello went 25.79 to take over as the French national record-holder.

Henique swam in the first of the two semi-final heats on Friday night, though, and blasted a 25.63 to qualify third for finals. Gastaldello was off her time and finished 15th with 26.01.

Henique and Gastaldello both swim for CN Marseille, previously known for housing most of the French men’s national team. However, the club is now home to many of France’s female sprinters, and it was Henique who kicked off the migration when she moved to Marseille in 2014.

Henique won the bronze medal in the 50m fly at the 2011 World Championships in Shanghai. She is entered in the 50m freestyle on Saturday, but said in an interview that she is still deciding with her coach, Romain Barnier, whether or not save her legs for the 50 fly final.

World Record holder Sarah Sjostrom dove in for her 2nd swim of the night. She cruised to top seed in 25.30, putting up the only 25-low of the semis. Kelsi Worrell turned in a personal best 25.57, just missing the American Record by 7 hundredths of a second.

Canada’s Penny Oleksiak (25.66) will get a shot at Rikako Ikee‘s Junior World Record in tomorrow night’s final, but the two junior stars won’t go head-to-head as Japan’s Ikee missed the final with a 25.90 for 13th. It took a 25.73 to make the top 8, with the 8th spot being occupied by Farida Osman in a new African Record.