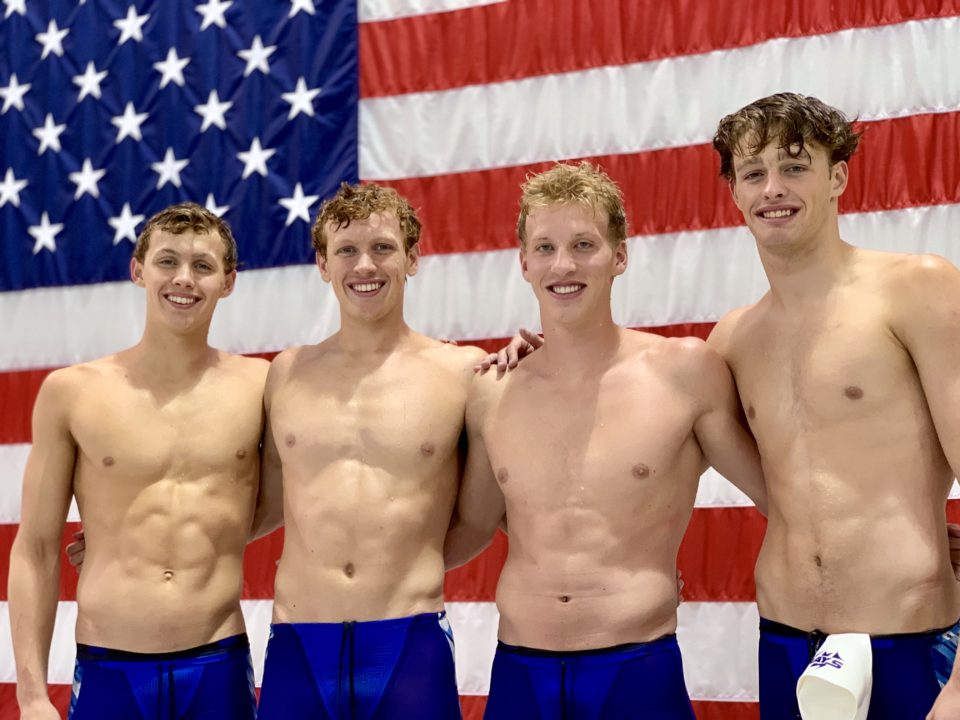 Swimming this weekend at the Tim Meyer Senior State Championships in Granville, Ohio, the Mason Manta Rays’ 15-18 boys have...

19-year-old Yang Junxuan broke her own 200 free Asian Record during day four’s finals session of the Chinese Olympic Trials by .13.

In their last summer season before one of their key legs, Jake Foster, matriculates to the University of Texas, the group of Adam Chaney, Jacob McDonald, Jake Foster, and Carson Foster combined for a 7:24.52 in the 800 meter free relay on Thursday.

That breaks both the 17-18 National Age Group Record and the 15-18 National Age Group Record, which were jointly set by a group from Nova of Virginia in 2015 in 7:25.78. That group included John Cortright, Aaron Schultz, Charlie Swanson, and Townley Haas. Swanson is the 3-time defending Big Ten Champion in the 400 IM, and Townley Haas is a 2016 Olympic gold medalist.

According to the official Manta Rays’ Twitter account, the group wasn’t shaved or tapered, and with the US National Championships coming up in about 3 weeks, that would make sense.

Chaney, McDonald and Carson Foster are all entering their senior years of high school. The Mason boys (this group plus a few other contributors) also hold the 15-18 records in the 200 medley relay, and 400 medley relay in long course, plus 4 short course records.

Carson split a 1:48.1 untapered, this summer is gonna be scary for him. That 4im jr world record is toast

Do you know other times in the individual 200 free A-final? Thanks.

Does anyone know the splits of the previous record?

I’ve added them above.