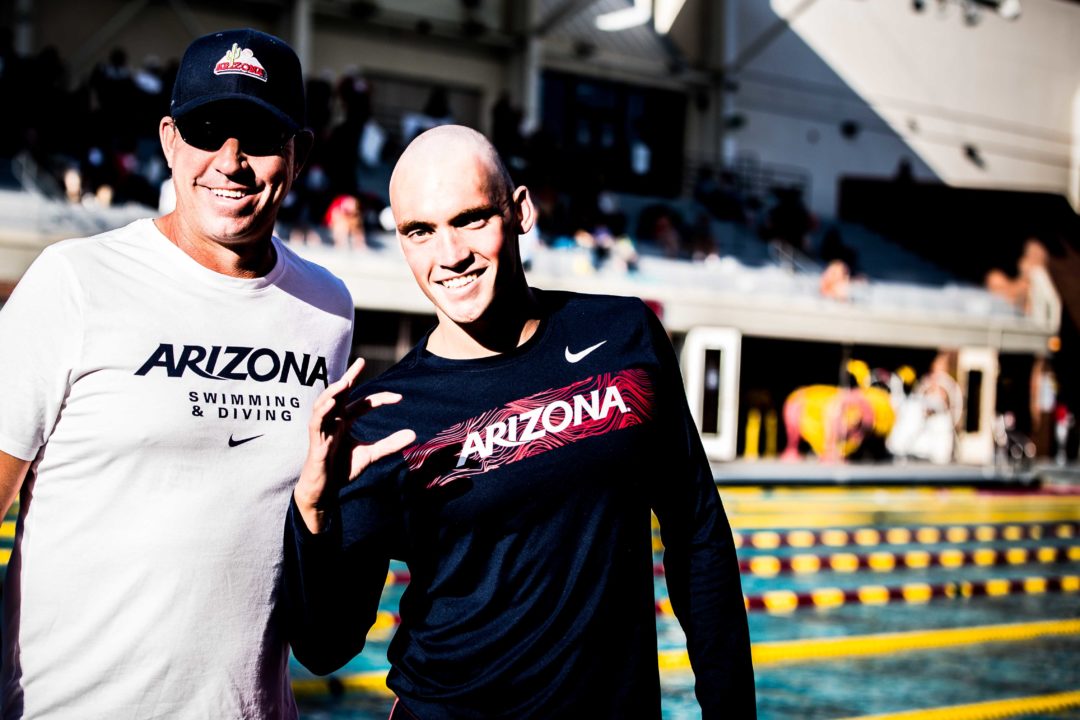 University of Arizona's Christian Imbus dropped nearly 21 seconds in the 1500 to qualify for the 2020 US Olympic Trials in the event. Current photo via Jack Spitser/Spitser Photography

To get things started, the team of Kunjun Shen, Zhuoxuan Liu, Yunqui Wan, and Xindan Zeng, representing Shanghai, won the women’s 200 free relay in 1:40.56, nearly four seconds ahead of runners-up Socal Aquatics Association, who finished in 1:44.64, themselves fully three seconds ahead of Mission Viejo Nadadores, who took 3rd in 1:47.81.

The team of Thomas Reed, Thomas Finello, Ariel Spektor, and Nikola Miljenic won the men’s 200 free relay for Trojan Aquatics in 1:32.85, despite trailing Tuscon Ford Dealers by nearly a full second at 100 meters, 47.51 to 46.69. The Trojans were saved by a 22.11 anchor leg from Miljenic, a Croatian National who transferred from Indiana University to the University of Southern California prior the 2018-2019 NCAA season. Miljenic’s best flat-start time in the 50 is a 22.48 from 2016 when he represented Croatia at the 2016 European Junior Swimming Championships. Before Miljenic dove in, Ariel Spektor delivered a 23.23 on the third leg of the relay. Spektor’s best flat-start time was recorded at the 2019 Atlanta Classic, where the 20-year-old posted 24.06. The only other swimmer to break 23-seconds in the relay was Tuscon Ford Dealers’ Aldan Johnston with a 22.92 on the third leg.

Arizona State University’s Emma Nordin leads going into the finals of the women’s 800 with a 8:43.81, shaving three seconds off her lifetime best set at the 2017 Pro Swim Series in Indianapolis. Though Nordin’s previous personal best was faster than the 2020 Olympic Trials cut, it was done prior the qualifying period, which opened in December of 2018. With her swim tonight, Nordin officially punches her ticket to the 2020 US Olympic Trials in the 800 free. Mexico’s Ayumi Macias Alba is seeded 2nd behind Nordin in 8:46.71, and 17-year-old Juli Arzave is seeded 3rd in 8:51.67. The finals of the women’s 800 will be Friday evening, July 12th.

Another notable personal best in the women’s 800 includes Savannah DuPuis of the Mission Viejo Nadadores (and University of Kentucky) who dropped nearly 7 seconds to finish 4th in 8:54.67.

University of Arizona’s Christian Imbus dropped nearly 21 seconds in the 1500 to qualify for the 2020 US Olympic Trials in the event, taking the lead into Saturday night’s finals by 10 seconds ahead of ASU’s Jack Little, who qualified second in 15:45.14, missing the Trials cut by mere 25/100ths. Though Little did not quite hit the Trials qualifying time, he still shaved 5 seconds from his personal best, and will have another opportunity Saturday.

This was prelims for the men’s 1500 not a win…finals on Saturday night..