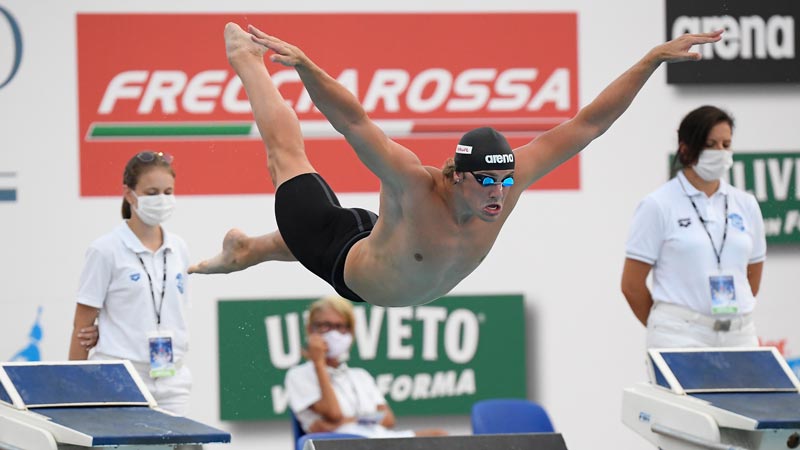 Nicolo Martinenghi dropped a 59.01 to clear prelims this morning in the men's 100 breast, a season-best and just .26 off of his lifetime best Current photo via Federnuoto

Nicolo Martinenghi dropped a strong 59.01 to clear prelims this morning in the men’s 100 breast, a season-best and just .26 off of his lifetime best and Italian record of 58.75. Alessandro Pinzuti nearly broke a minute for second, going 1:00.10.

Alessandro Miressi staked his claim in the 100 free, swimming a time of 48.58 to lead the way this morning. He’ll face a challenge from Thomas Ceccon, who was second in prelims at 48.99. 50 free champion Lorenzo Zazzeri (49.04) and Santo Condorelli (49.07) were nearly under 49 themselves.

As expected, national record-holder Federico Burdisso dominated the 200 fly prelims. Burdisso posted the fastest time by over two seconds, hitting a 1:55.77 to move to the #7 spot in the world. He didn’t swim this event at the Italian Open Championships in December, but he’s now heavily favored to take the win tonight and potentially challenge his own record of 1:54.39 from 2019 Worlds.

Federica Pellegrini was a cut above the rest in the 100 free, swimming the fastest morning time at 54.40 ahead of Silvia Di Pietro (55.12). Teenagers Chiara Tarantino (55.46) and Costanza Cocconcelli (55.51) followed closely behind Di Pietro.

I gotta see his start! Have any video?

James Gibson (Energy Standard coach) has a good video of him and the other Italian breaststroke doing it. As cool as it looks, it really doesn’t seem to give him THAT much, if any, of an advantage over his competitors in a race.

I wish FINA would eliminate downward butterfly kick from breastroke, this would cleanup the controversies surrounding every major meet.

Funny thing is athletes have been sneaking in the dolphin kick long before kitajima. We were doing this in the 90s and getting away with it.

Still say we allow unlimited dolphin kicks and just come up at 15 yds like every other stroke.

you dont have to come up at 15yds in any stroke

You don’t have to be snarky either, but here we are!