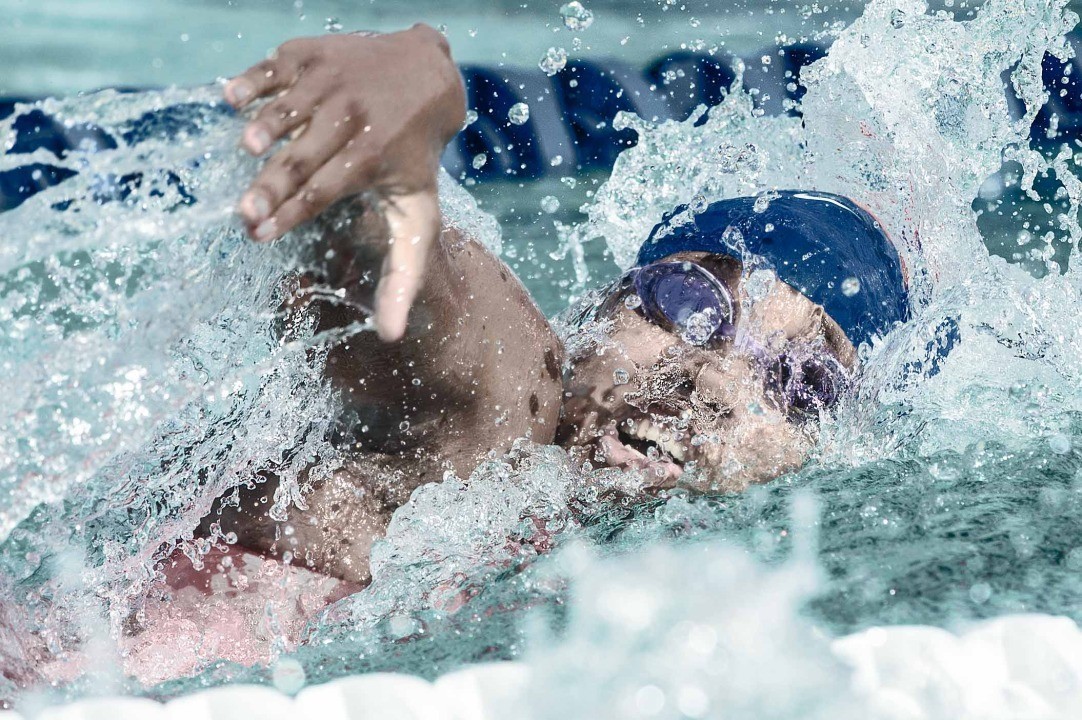 Reimagine this year’s Women’s Championship meet as if you are filling in your March Madness bracket. Current photo via Mike Lewis/Ola Vista Photography

It is that time of year again. The snow is melting, the sun is finally out past 5 p.m., and the college world is ready for The Big Dance. March Madness is upon us. At this very moment, millions of people around the world are hastily filling in their brackets and choosing their NCAA DI Men’s Basketball winners based on everything from advanced number theory to favorite uniform color. Las Vegas is rejoicing as they pull in the largest gambling take of the year and the involved colleges are ogling the television revenue headed into their budget. It is during this month long tournament that the American consciousness is focused squarely on college sports.

In celebration of the best time in the sporting year (NFL free agency, pitchers and catchers reporting, NBA and NHL playoffs around the corner), I thought it might be fun if we look at DI swimming and diving under the same lens we look at the March Madness Tournament. What happens if we make a bracket for swimming? Who is this year’s Kentucky (undefeated in Men’s Basketball) and who is this year’s Gonzaga (a team just good enough to have a shot)? After spending a few hours taking in SwimSwam’s amazing All the Links You Need For the 2015 Women’s Division I NCAA Championship page, I reimagined this year’s Women’s Championship meet as if I was filling my March Madness bracket.

Just in case you aren’t familiar with the tournament and how it works, qualifying teams are broken into four regions (West, Midwest, East, and South) and the winner from each region goes to the Final Four. The winners of the Final Four match go on to the National Championship game. Here are some of the terms I will be using in my fantasy bracket

Final Four: This is the team that would be the favorite to come out of their region and compete for the championship. Just a note, regions are loosely based on geography but for the most part they are organized for seeding.

March Madness Spirit Team: This is the NCAA Men’s Division I basketball team and its chances in The Big Dance that would most closely resemble the Women’s teams and their chances in at NCAA Championships.

Cinderella: This is everyone’s favorite part of March Madness. These are the team’s that have the best opportunity to pull upsets and shock the world. The Cinderella teams rarely win everything, but they annually make a run, ruin bracket predictions, and have a great effect on their way the tournament plays out.

The predictions by Region:

With Missy Franklin and Cierra Runge in the running to take at least two events each, the Cal women are the odds-on favorite to take the title this year. While a similar prediction was in place last season, the team has added across the board and their stars are shining just a little brighter than the field heading into championship week. Relays tend to be where the title is cemented and all five of the Golden Bear relays are entering the meet as the top or close-to-the-top entrant and their scoring totals will make them hard to beat.

This was the easiest equivalent to find. California has such strong depth and talent on top that the only apt comparison could be the Kentucky Wildcats. John Calipari’s team has the best eight man rotation in college basketball, went undefeated in the regular season, and are favored 51% against the rest of the field to take the tournament.

Simone Manuel is the favorite to take both the 50 and 100 free and Lia Neal should be right behind her in both events. The Cardinal are the key squad in the meet to challenge the Cal relays and if they catch fire, they have a shot to jump the Georgia Bulldogs and make a run.

Duke’s Jahlil Okafor will be the most talked about individual player at the Men’s tournament. He is the arguably best player in college basketball and his play will color how the Blue Devil’s fare in their region and beyond. Stanford’s Manuel is a star and her charisma and talent will help the Cardinal make a splash this year. Much like Duke, Stanford is not the favorite to win it all, but they have a chance on the weight of their talent.

As the immortal Nature Boy Ric Flair would say, “To be the champ, you have to beat the champ.” The Bulldogs are the two-time defending champions and they are poised to put up a fight this year. While the squad will miss Laura Ryan’s championship finishes on the boards, Junior Hali Flickinger is in position to make a run at both the 400 IM and 200 Fly titles. Right behind her in both events will be Amber McDermott in IM and Laura Harrington in fly. With depth across the board and Kylie Stewart and McDermott in place to challenge Cal’s Franklin and Runge, the Bulldogs have the opportunity to defend if they light up the lanes.

The Arizona Wildcats are in an interesting position. Any other year in College Basketball, they would be the likely favorite to win the tournament, however much like Patrick Ewing playing in the same era as Michael Jordan, there is a goliath in the way. Kentucky is in the same region as Arizona and they are eager to stamp out the hopes of the western Wildcat squad. Much like Arizona, Georgia has the talent and the depth, but might fall short due to a couple of key weaknesses. To stand a chance, Georgia must find a way to push back Stanford and Cal in the relay events to repeat.

The Cavalier women have the opportunity to make an impact in handful of events. Leah Smith is a dynamo in the distance free and has a chance at surprising the field and winning the 1650. Similarly, in 200 breast, Laura Simon will challenge favorite Emma Reeney for the top spot. The Cavaliers are a long shot to make the top four, but this prediction is all about the squad capturing magic. Maybe some of that magic leads Courtney Bartholomew to climb the ladder in the loaded backstroke events.

Villanova has played well all season and their strength lies in the play of Dylan Ennis and Josh Hart. While the team won a weakened Big East, they will face a difficult run in their region if they want to return to past glory after being an also-ran for years. Virginia is shooting for its best finish in program history and if Smith and Bartholomew can pop at the right time, the window of opportunity is wide. While they are not likely to win the title both Villanova and Virginia are in position to make their presence felt.

Jessica Theilman and Natalie Hinds will need to make noise in their events for Florida to have a shot at top-5 this year. Hinds is having an amazing season but competes in loaded events. Much like any Cinderella team, they aren’t going to win, but their time in the sun will catch attention.

The 11th seeded BYU Cougars are the sweethearts of bracket analysts everywhere. On the backs of their young talent the team is projected to outrun their seed and provide some upsets before running into the top talent in their region. The Gators will have a chance to make a quick impact in the sprint events and put the rest of the field on notice.

As we mentioned above, relays are where the points are at Nationals. The Badgers have a deadly 200 and 400 free relay built on the talent of Ivy Martin. If Aja Van Hout can hold serve, Wisconsin can sneak into the top-3 of both events.

The Lumberjacks are the upset special of the tournament. They are the team with that “it” factor that allows for the “why not” thought process. The Badgers are projected to be outside of the top-10 but if their six swimmers show their talents, why can’t the Badgers turn some heads?

What would sports be without rivalries? Stanford v. Cal is one of the college world’s best feuds and this championship will prove no different. With stars Manuel and Franklin fighting for attention, it will ultimately be the strength of the California Relays that lead them to the coveted title.

I loved this article it was Fun, entertaining and informative. Good Work!

It would have been great if BYU didn’t get knocked out in Round 1 but that is why they were a Cinderella.