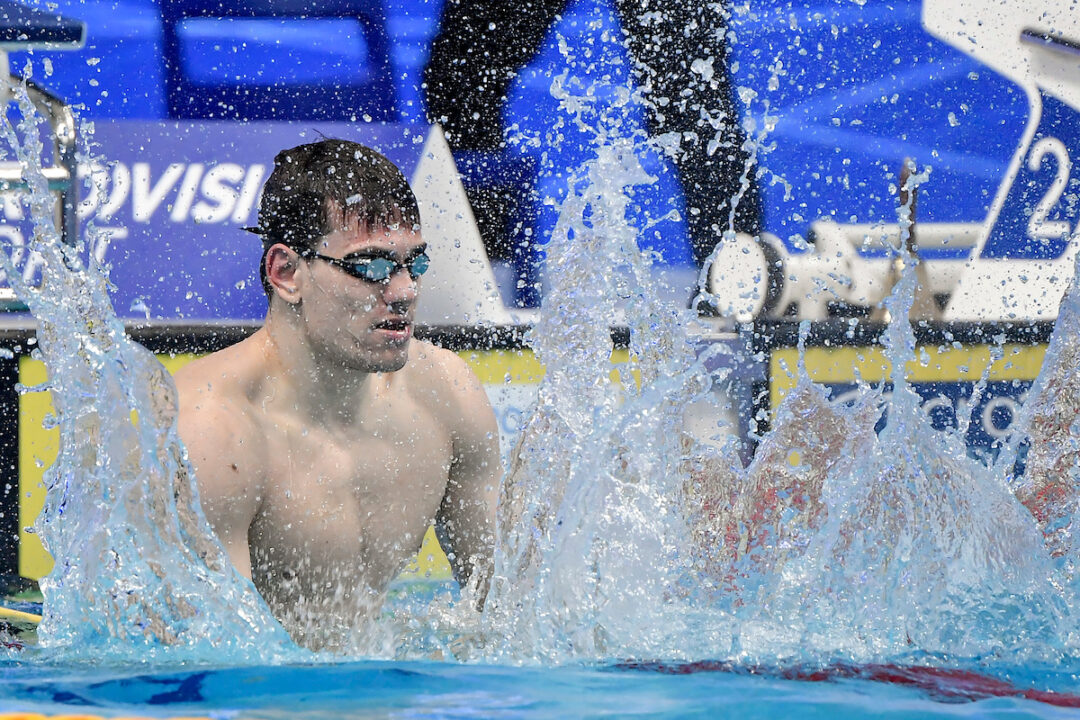 The swimming here is part of a multi-sport event being hosted by Russia after most of their sporting federations were barred from international competition following the country’s invasion of Ukraine in February. The ensuing war has resulted in at least 5,110 civilian deaths according to the United Nations High Commissioner for Human Rights, and has displaced millions of people.

Russia’s banishment from many international sporting events include the recent FINA World Championships, which came after swimmer Evgeny Rylov appeared at a pro-war propaganda event.

The swimming competition features primarily athletes from Russia and Belarus, which was also banned from the World Championships for its part in the invasion,  though a handful of other countries have also sent athletes (including Syria, Kazakhstan, Vietnam, Armenia, South Africa, Tajikistan, and Sudan).

Vekovishchev kicked things off with a win in the men’s 100m fly, leading a trio of sub-52 second competitors.

Zhkharev was the top-seeded Russian in the world rankings heading into these Games and he remains that way now, owning a season-best of 51.31 from April’s Russian Championships.

Martin Malyutin scored the win in the men’s 200m free, posting a mark of 1:46.14 for the victory in a new season-best effort.

Although runner-up Mikhail Dovgalyuk was faster on the way out here in Kazan tonight, opening in 52.50 to Malyutin’s 52.67, Dovgalynk couldn’t quite maintain the seed and wound up snagging silver in 1:46.79.

Daniil Shatalov was also under the 1:47 barrier tonight, checking in with a performance of 1:46.85 for bronze.

Malyutin, a member of Russia’s silver medal-winning 800m free relay at the 2020 Olympic Games, had earlier clocked 1:46.44 in this men’s 2free event, so tonight overtakes that April outing.

On the women’s front, the 200m breaststroke winner here Evgeniia Chikunova did damage in the 100m breast event as well. The 17-year-old grabbed gold in 1:06.60, keeping Nika Godun at bay in the process. Godun settled for silver in 1:06.81 in the two-woman battle.

Godun’s time shaves .06 off of her previous season-best of 1:06.66 while Chikunova’s time here indeed ranks as her fastest of the season.

Additional winners included Arina Surkova taking the women’s 50m free in 24.80, the only sub-25 second time in the field, while Kliment Kolesnikov topped the men’s 50m back podium tonight in 24.16.

Mariia Kameneva and Anastasiya Shkurdai earned times of 59.26 and 59.97, respectively to take gold and silver in the women’s 100m back while Aleksandr Stepanov reaped gold in the men’s 800m free in 7:50.63.

We must ignore the whole event!

We are rooting for all Russian swimmers!

this generation of Russian swimmers might as well retire, FINA will never let them back into a World meet

They can, if Russia withdraw from Ukraine