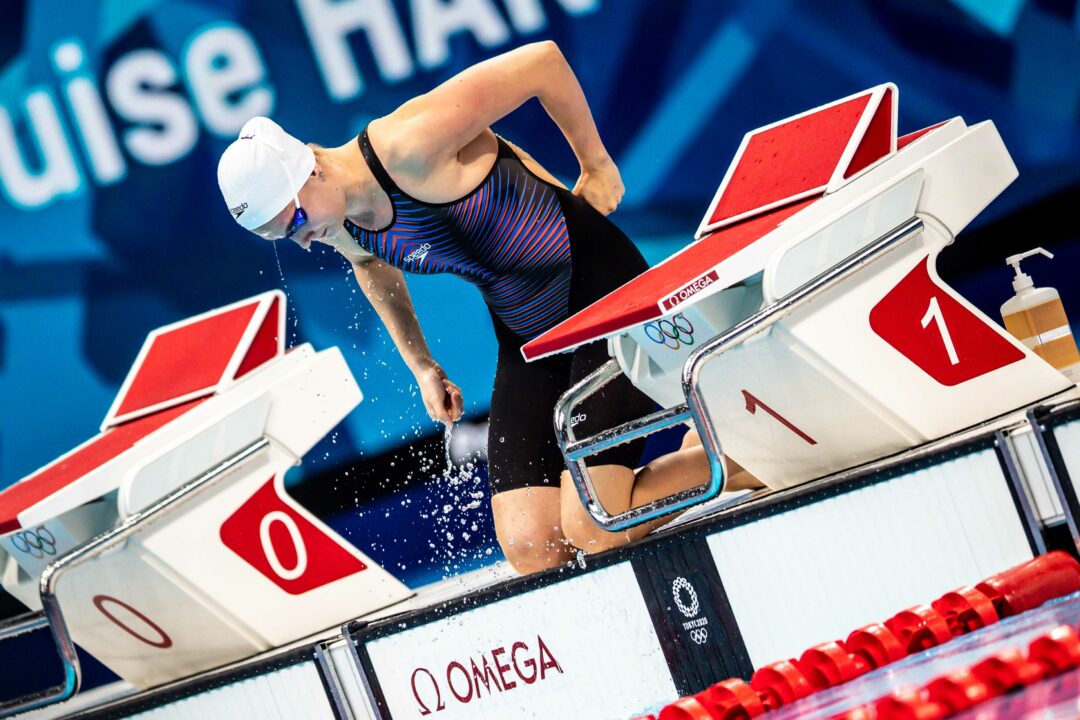 The swimming here is part of a multi-sport event being hosted by Russia after most of their sporting federations were barred from international competition following the country’s invasion of Ukraine in February. The ensuing war has resulted in at least 5,110 civilian deaths according to the United Nations High Commissioner for Human Rights, and has displaced millions of people.

Russia’s banishment from many international sporting events include the recent FINA World Championships, which came after swimmer Evgeny Rylov appeared at a pro-war propaganda event.

The swimming competition features primarily athletes from Russia and Belarus, which was also banned from the World Championships for its part in the invasion,  though a handful of other countries have also sent athletes (including Syria, Kazakhstan, Vietnam, Armenia, South Africa, Tajikistan, and Sudan).

Surkova clocked a time of 57.58 to narrowly beat out Svetlana Chimrova who snagged silver in 57.64 while Anastasiya Kuliashova of Belarus was next in 57.80. Surkova opened the fastest in 26.13, although Chimrova stepped it up a gear on the back half to close in 30.96 to Surkova’s 31.45 to keep it close.

Surkova’s time here overtakes her previous season-best of 57.69, a time she put up this past April. Chimrova, too, earned a new season-best, getting under her previous mark of 58.06 from the same Russian Championships a few months ago.

As for Kameneva, the 23-year-old topped the women’s 50m backstroke field in a time of 27.65. That represents the only time under the 28-second threshold as Belarus’ Anastasiya Shkurdai touched about half a second later in 28.14.

Prigoda took on the men’s 50m breaststroke this evening, although the 26-year-old wound up with the bronze in the one-lap race.

Winning the 50m was Andrei Nikolaev who scored a mark of 26.86 while Belarusian ace Ilya Shymanovich took silver in 27.04. Prigoda wound up tying Danil Semyaninov for 3rd place in 27.20.

Of note, two-time Olympic gold medalist Evgeny Rylov was among teh competitors, but the 25-year-old came in 4th in a time of 1:58.20. He had been faster in the prelims with a morning result of 1:57.69 as the top-seeded swimmer.

Come on! Please, swimswam take out this thrash article about Russia “SOLIDARITY” down!

I’m sure the drug testing is top notch at this meet!

Swimswam, a swim news blog providing us the results of a swim meet. How dare they? Lol.
Thanks swimswam for keeping the journalistic integrity alive.

This is a swimming news organization, there is no bias here whatsoever. “

**********
You want information about this event – no problem. Go to Russian websites and you will witness this celebration. If you ever watched “ Triumph of the Will” you will find a lot of similarities.
If you ever lived in Armenia as your last name suggests you will understand those reports and broadcasting.

While I haven’t watched it I read articles and analysis of the movie you have mentioned. Before I thought that just because swimswam was a news organization they are just doing their job without bias, any swimming whatsoever is the potential to be news. Swimming is swimming.

However taking a larger scope of what is happening, what if the war was happening in my country. The people who are attacking me, who are then being recognized for their swimming talent in a competition that is named purely for the sake of propaganda.

I see now how publicizing results isn’t just showing this specific swimming that is occuring. But that now in this context, particularly because of why the competition was… Read more »

However from a certain perspective what about those russians who only have the choice but to swim? They can’t do much from within their country if they still want to survive and in some other cases take care of their family. Your response is a bit too black and white. I would go to the point where we in a minimalistic style just report their times like a swim news organization does while pointing out the fact that this competition is propaganda.

Definitely there is a reason why Swimswam consistently reports on this “Solidarity” events. I hope it isn’t money. But if it isn’t the direct Russian influence then what is it?
The word “solidarity” in the Rylov’s mouth and the “Z” sign on his T-short and Russian tanks are the same thing. How you don’t understand it.

Really don’t understand why we should share this news from Russia..specially, if the event is called “solidarity games”…solidarity for what? bombing hospitals and schools?

Fine. Clearly you want to report it. Fine. But blindly adopting and reporting this as the “Solidarity Games” is gross. You know that’s propaganda. I could draw a bunch of metaphors and similes in history to make it obvious how uncomfortable it is that you do so, but I hope I don’t have to.

Totally. It’s ridicullous how some people just have no clue what’s really happening in the world. Downvoters = 🤡🤡🤡

Not even a native speaker bro. Didn’t have time to check, sorry. I hope everyone got the point anyway