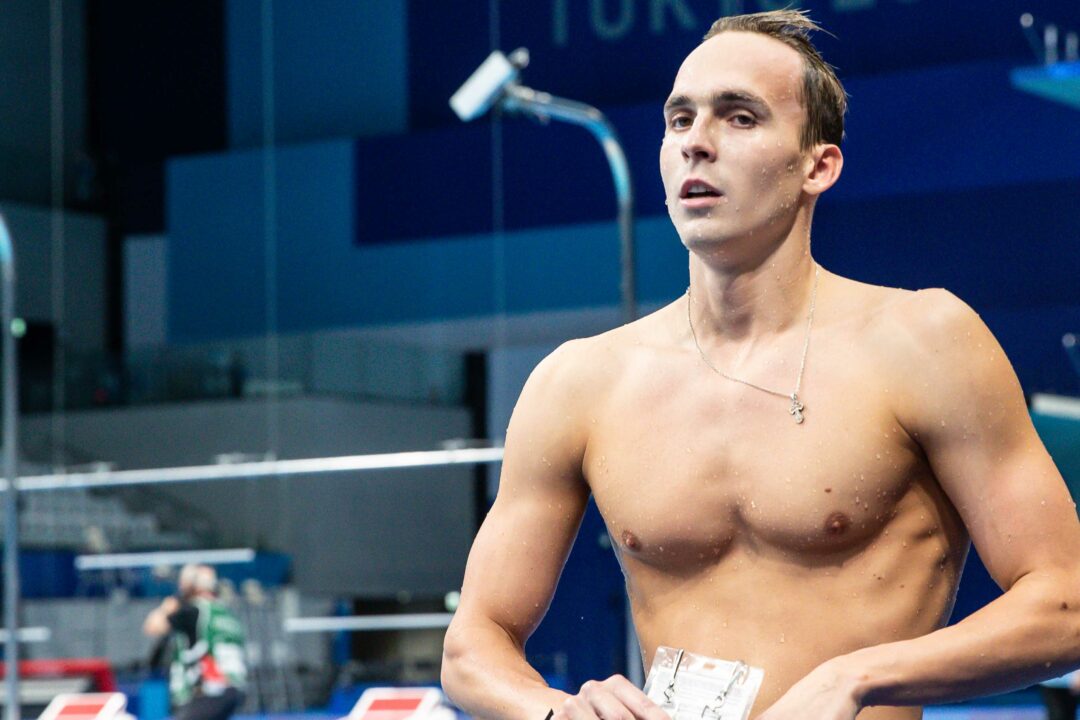 The 2022 Russian Solidarity Games kicked off yesterday with the international meet taking place in Kazan through Monday, July 25th.

The Games are taking place to supplement the World Championships, which Russian and Belarusian athletes were banned from due to Russia’s invasion of Ukraine.

Right off the bat, we saw an impressive performance by multi-Olympic medalist Kliment Kolesnikov. Taking on the men’s 100m back, Kolesnikov fired off a time of 52.58 to score the only time under the 53-second mark.

Opening in 25.10 and closing in 27.48, Kolesnikov beat out teammates Pavel Samusenko and Nikolay Zuev who touched in times of 53.57 and 53.60 for silver and bronze, respectively.

Had Kolesnikov produced this time at the World Championships in Budapest, the 22-year-old would have placed 6th in the final.

He now sits 7th in the overall season world rankings in this event.

Also competing was the reigning Olympic champion in the men’s 100 back, Evgeny Rylov, who was more than two and a half seconds off his winning time from the Tokyo Games in 54.55 to place fifth.

Rylov, 25, became a focal point of Russia’s ban from athletic competition worldwide after appearing at a pro-war rally in March, one where Russian President Vladimir Putin was present with him on stage.

In addition to being individually banned by FINA for a nine-month period, Rylov also lost his sponsorship with Speedo as a result of his appearance at the rally.

Getting to the wall first was former world record holder Anton Chupkov. Although at one time Chupkov hinted at retirement, the 25-year-old showed no signs of slowing down, clocking a winning 2breast time of 2:07.19.

Chupkov’s outing was barely enough to keep countryman Kirill Prigoda at bay, with Prigoda touching just .26 behind in 2:07.25. Prigoda actually led the duo with a super quick 1:01.39 opener but Chupkov caught him on the back half to get the job done.

Chupkov and Prigoda would have placed 2nd and 3rd in Budapest with these results, with both sitting only behind current world record holder Zac Stubblety-Cook’s gold medal-garnering 2:07.07.

These Russian aces now also sit only behind ZSC’s world record of 2:05.95 in the season’s rankings.

Nearly breaking into the top 10 performers in the world this season in the women’s 100m free was Maria Kameneva. The sprint ace posted a winning time of 53.48 here at these Solidarity Games, comprised of a 25.87 opener and a back half of 27.61.

Entering this competition Kameneva’s season-best at the 53.70 she produced in March. In fact, her time here checked in just .03 outside of her lifetime quickest of 53.45, a time she logged in the semi-finals of the women’s 100m free at the 2019 World Championships.

Is this a FINA sanctioned event?
Thinking of World ranking of times and Rylov is competing.

It is not sanctioned per se, but FINA basically said “it doesn’t matter, he can swim anyway and his times will count for World Records and World Rankings.”

The suspension of Rylov was meaningless, just for show.

Do not poke the Russian bear! You will not like!

Who cares about Russia? Please, swimswam… let’s support Ukraine and ignore anything with russia…

That event should have been called “Putin’s Invasion to Murder Our Ukrainian Neighbors Propaganda Platform”. Media outlets should completely ignore it. Aren’t they jacked up on PEDs anyways?

This comment is so ignorant. It’s like saying all Americans kill each other with guns and are morbidly obese

Russia and politics/other comments here aside, I AM glad to see that Chupkov is still going. Felt like he wasn’t at his best at the Tokyo games, and too young to retire. So much fun to watch his incredible DPS, near even-split 200 breast.

While I respect and value all the news the team at Swimswam work hard to bring us so promptly, I have to agree with ‘Old Fish’ below. This event was designed as and is nothing more than Russian pro-invasion proxy – A frankly vile spectacle. Shame on all those competing.

Could not agree more. This is pure propaganda and should be emphasized here. I see that Shkurdai, who recently talked about going abroad to train, is competing. Shame on her.

Shame on whom? Belarusian people stood up against the dictatorship in 2019 but eventually failed. Nobody in the western community cared about that. Nobody showed solidarity with Belarusian people at that time, but now everyone sits there and blames them for not being brave enough to stand up? They did. Shkurdai and co lost a lot of funding for refusing to sign the letter in support of the president in 2019.

You are right and she did good back then. Why is she condoning the regime now? Does she still have plans to leave?

I don’t think she now receives any of those funding from their government. As a swimmer she has to find somewhere to compete, and it’s not easy to get a visa to countries like US at this point of time.
There is no evidence that this meet explicitly exhibits anything political. You can argue that it is an implicit propaganda, but if you look at things in this perspective, there are propaganda everywhere in our life. One of your retweets on Twitter could help the propaganda of some party without you being aware of it. Many social activities can be promotion of something. You have to admit there are such propaganda in every country that only people from other… Read more »

Stop making excuses for Russia.. go move there if you want.. blood on your hands

Not making excuses for russia. The invasion is wrong.

The invasion of iraq was also wrong. I also never made excuses for the US.

The response by Wimbledon should have been consistent.

At least the French open, Australian open and US open are showing consistency.

Even the WTA fined Wimbledon.

US athletes should have been banned from all sporting events across the globe the 10+ years they were invading, overthrowing the government, and occupying Iraq. It’s literally the same thing.

Or you know, neither the US atheles nor the Russian athletes should be penalized because they weren’t part of the decision making for either invasion. The geopolitical hypocrisy is somewhat sickening.

Shut the front door… You know even less about politics than you do about swimming.

“Shame on all those competing”. Are the Russians supposed to never compete again? That doesn’t seem like the solution.

Agreed. It’s their craft and livelihood. I get it.

Same as apartheid South-Africa. And then it was “only” discrimination, not indiscriminate killing.

Come on. She did it because the GB selectors are so biased. She couldn’t have know this would happen.

What a sad little person you are… She was not good enough – and still isn’t. Good thing the GB selectors don’t know what they’re doing with GB team breaking records everywhere since 2015, Moaners will always be moaners. Time to climb back under your rock..

The “business as normal” tenor of the coverage of these championships validates the russian position that there is nothing wrong with their invasion of Ukraine. I like everyone else am curious as to how the amazingly talented russian swim squads are doing. They are largely banned though from international competition for a reason. The coverage could more emphatically denounce the invasion or potentially should not be covered at all.

American sports need to stand up to Russia for falsely imprisoning Brittney Griner.

May I ask why do you think that she is falsely imprisoned? She did have a prohibited substance while crossing Russian border, didn’t she?

Yeah she committed a serious crime in their country. If she wasn’t famous, this wouldn’t be news at all. If she would have smuggled the same substance across the US border 10-20 years ago, she would have been put in jail too.