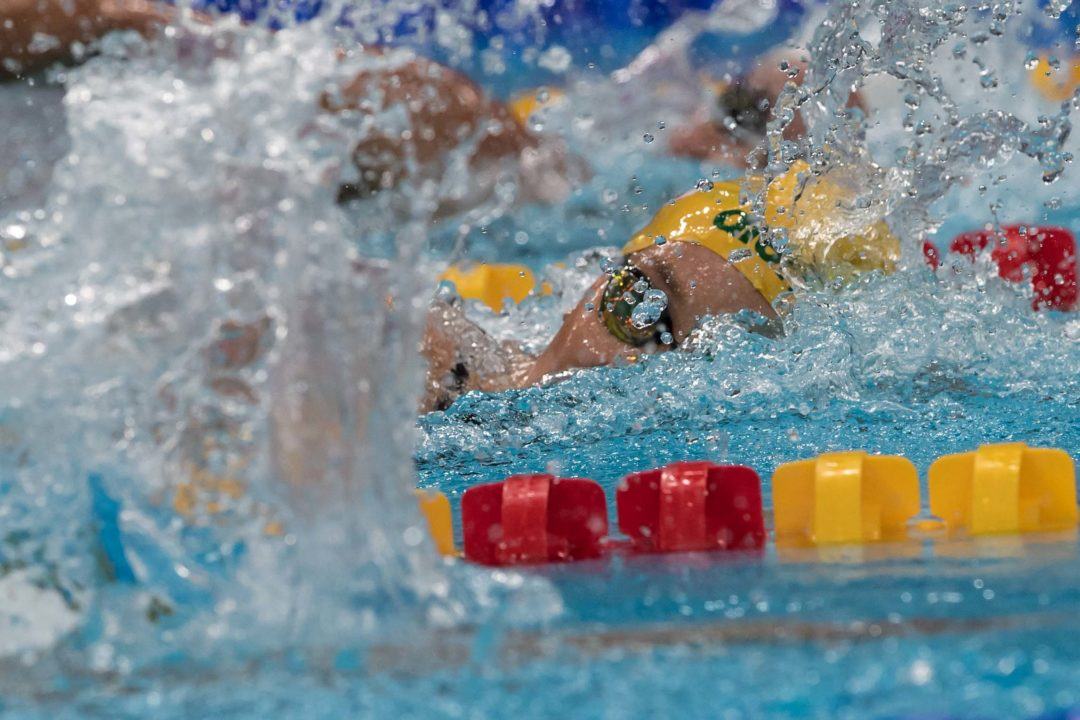 Check out some of the impressive short course times thrown down by Australian women at their unique relay blitz this month at home. Archive photo via Mike Lewis/Ola Vista Photography

Below are the women’s results and then we’ll report on the men.

The Brisbane Bisons scored the quickest time of the entire field, hitting a result of 7:44.56.

400m freestyle world champion Ariarne Titmus led off in a solid 1:53.76, a time which represents the 3rd fastest time of her career. Next in line was would-have-been NY Breaker Mollie O’Callaghan, with the 16-year-old posting a time of 1:57.72 behind Titmus.

McKeown’s best time individually is represented by the 1:55.84 produced at the 2018 Aussie SC Championships, so her outing here, although on a relay, is quicker than that when taking into account a flyover start.

Although not on the quickest overall relay, 26-year-old Madi Wilson busted out a monster split of 1:52.44 as a member of the Adelaide Anacondas. Wilson was a member of the women’s 4x200m freestyle relay who broke the long course World Record in Gwangju last year, so we know she has the freestyle prowess to make things happen.

However, Wilson just recently put up the fastest individual 200m free time of her career, logging a time of 1:53.60 just this past July after inconsistent training due to the coronavirus pandemic. Her 1:52.-low is a head-turner for an exhibition swim.

The Brisbane Bisons were once again on top, reaping the quickest time of the entire field with a mark of 1:48.30. Making up this result was Minna Atherton leading off in 26.76, McKeown right behind in 30.85 for breaststroke, while Ella Ramsay and O’Callaghan completed the back half with fly and free splits of 26.20 and 24.49, respectively.

Atherton would have been a 2nd season member of London Roar, following up her incredible first season which saw the David Lush-trained star bust out a World Record of 54.89 in the short course 100 backstroke in Budapest last year.

Another swimmer who withdrew from the ISL was 18-year-old Meg Harris, with the St. Peters Westerner set to join the Cali Condors. She opened the Brisbane Bisons B relay with a backstroke split of 27.01.

The combination of O’Callaghan, Harris, Titmus and Groves got it done in a time of 3:36.62 to clock the fastest time of the entire blitz.

This time it was Harris who led-off the Brisbane Bisons, with the would-be Cali Condor posting an opening split of 24.85 to help the squad produced a winning result of 1:39.41.

Additional splits include O’Callaghan’s 24.97 on the 2nd leg, Atherton touching in 24.75 and Groves with the anchor once again, this time in 24.84.

Wonderful swim Madi! (no picture of her yet in the In This Story section?)

‘scm’ should be in the headline….