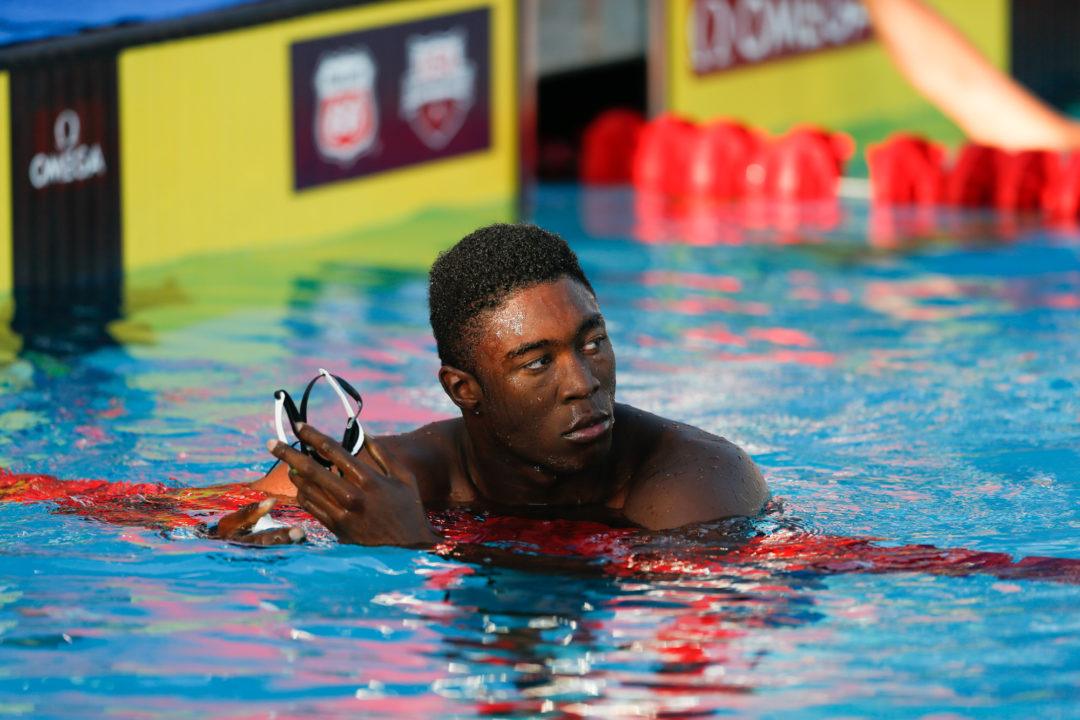 Reece Whitley swam an NCAA 'A' cut time of 51.49 in the men's 100 breast at day 2 prelims of the UGA Invite. Archive photo via Tim Binning/TheSwimPictures.com

Day 2 prelims from the 2018 Georgia Fall Invitational in Athens saw many impressive performances go down, including a 100 fly/back double from Michigan’s Maggie MacNeil and an NCAA ‘A’ cut from Cal’s Reece Whitley in the men’s 100 breast. Check out a full recap of the session below.

Cal sophomore Sarah Darcel topped the women’s 400 IM prelims by nearly three seconds in 4:11.05, with her opening fly leg of 55.30 being almost two seconds faster than the next best in the field.

MacNeil, a freshman, continued her incredible showing this season with another 50-point swim in the 100 fly, clocking 50.88 to qualify 1st for the final ahead of Bulldog Veronica Burchill (51.88). MacNeil came into this weekend with the top time in the nation at 50.09, done at the ACC/B1G Challenge, but that time was equalled by USC’s Louise Hansson this morning at the Texas Invite. Erika Brown of Tennessee was also a 50.46 this morning at the their invite, so the race to break 50 is on for tonight’s finals.

Katie McLaughlin of Cal swam her first individual event of the meet here, qualifying for the final 3rd overall in 52.13.

Wolverine teammates Miranda Tucker (59.72) and Jamie Yeung (59.95) both cracked a minute in the 100 breast prelims, and Tucker will be hunting down Sophie Hansson‘s #2 time in the NCAA (58.44) in tonight’s final after splitting 58.24 on last night’s medley relay.

MacNeil then swam her first ever yards 100 back with an eye-popping time of 51.71, ranking her 9th nationally (coming into today).

Michigan’s Tommy Cope came just over a tenth off his lifetime best in the 400 IM to qualify 1st into the final, posting a time of 3:42.65. He went a best of 3:42.51 at the NCAA Championships in March.

Zheng Quah of Cal and Camden Murphy both scorched sub-46 second swims in the men’s 100 fly, with Quah’s 45.38 the new fastest time in the nation. Murphy was 45.47 for a new best time and the #3 time in the NCAA. These swims came as no surprise after both men split 44.9 on the medley relay last night, and both have a good shot at the ‘A’ cut of 45.24 tonight.

Whitley went 51.49 in the 100 breast to get under the ‘A’ cut of 51.73, and is now the fourth to do so after Charlie Scheinfeld (51.61) also hit the mark this morning at the Texas Invite. Whitley now ranks 2nd in the country behind reigning national champ Ian Finnerty (51.22), and this also stands up as his 2nd fastest swim ever trailing only his 51.16 from February.

Cooper Wozencraft of Virginia qualified 4th in 47.25, less than a tenth off his best time from last season’s ACCs (47.17).

It’s also worth pointing out that Georgia’s Javier Acevedo was initially entered to swim this event but scratched out. This is his first competition since breaking his foot, and he did have five swims on day 1.

Javier was out due to the meet being at UGA he had to take tests today. Remember they are student athletes

Good for him. Hope he got an A! I love that our swimmers and divers are such scholars. Keep up the great work!!!

Being a student athlete at UGA is an oxymoron

Results link is old, to UGA vs South Carolina.

re: Felix Auboeck finishing 10th in the 200 Free. Michigan has 7 of the Top 10 qualified for the evening… and perhaps their dominance in this event is why Felix swam the 400 IM before the 200 Free.