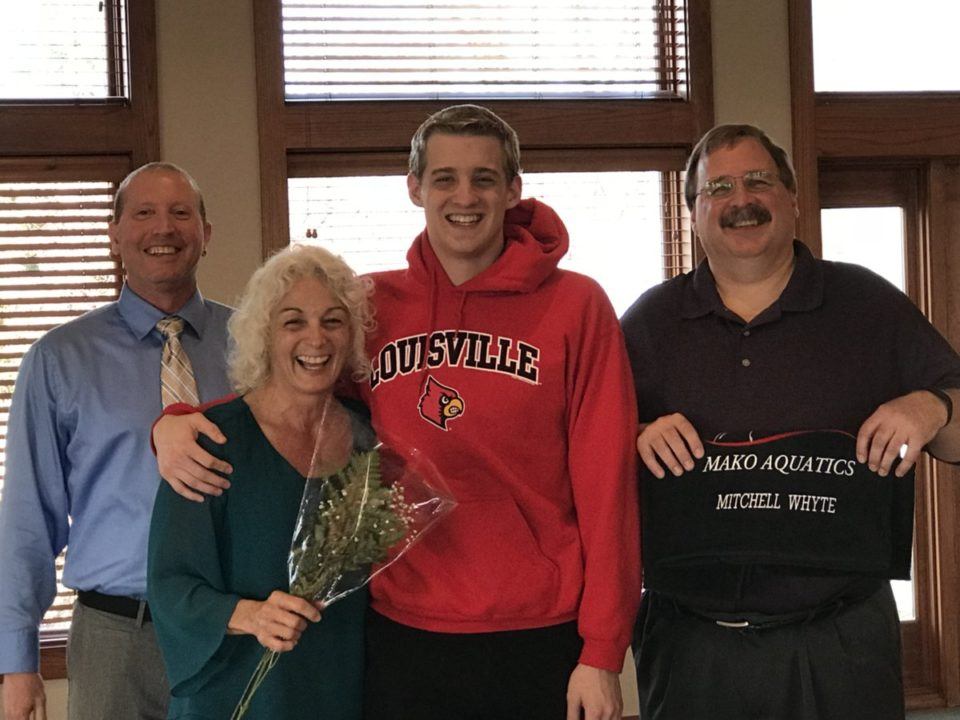 Louisville’s Mitchell Whyte took 2nd in both the 100 and 200 back at the ACC Championships. His time of 1:39.46 in the 200 moves him to #4 in the nation. Current photo via Mako Aquatics (formerly HASA) on Twitter

As a high schooler, Mitchell Whyte was once committed to swimming collegiately for Eastern Michigan University. Then, in 2018, EMU suddenly de-funded its Men’s Swimming & Diving program, despite it being the winningest team in university history.

Facing an uncertain future, Saint Paul, Minnesota native Whyte, with the assistance of his then-club coach, was able to schedule meetings with various coaches from Division I programs. Whyte ultimately settled on Louisville and has made an enormous impression since his arrival.

Coleman Stewart won this event for the 3rd-straight year, breaking a conference record and nearly breaking 44.0 with a 44.04. That’s the fastest time in the country so far this season, just ahead of Zane Waddell’s 44.10 from SECs last week.

Louisville teammates Mitchell Whyte and Nick Albiero both hit new personal bests, touching in 44.64 and 44.75, as fans were treated to the rare sight of three men going under 45 at a conference championship.

UVA’s Joe Clark touched 5th in 46.44 after finishing 3rd last year in 45.22. Clark’s best time this season is a 46.01 from the Tennessee Invite, and he may be in danger of not qualifying for NCAAs after scoring points there the last two years. It took a 46.06 to qualify last season.

One item of note further down the results: Boston College had its first individual scorer of the meet, Samuel Roche, take 21st in the C-final with a 47.60.

NC State senior Coleman Stewart went out in style, taking down the ACC meet and conference records in the last individual ACC swim of his career. Stewart knocked nearly a second off of the overall conference record, a 1:38.56 held by NC State alum Hennesey Stuart. That’s the third-straight conference title in this event for Stewart, who has swept the backstrokes here over the last three years. Stewart’s time ranks his #3 in the nation this season.

Louisville’s Mitchell Whyte took 2nd to pair with his 2nd place finish in the 100 back. His time of 1:39.46 moves him to #4 in the nation this season. Whyte also took 2nd last season.

I swam with Mitchell in high school. Making D1 finals in the National championships was unreal. Go Mitchell!

Minnesota backstroke does it again!

its unfortunate the university of Minnesota cant retain their own backstrokers!!!