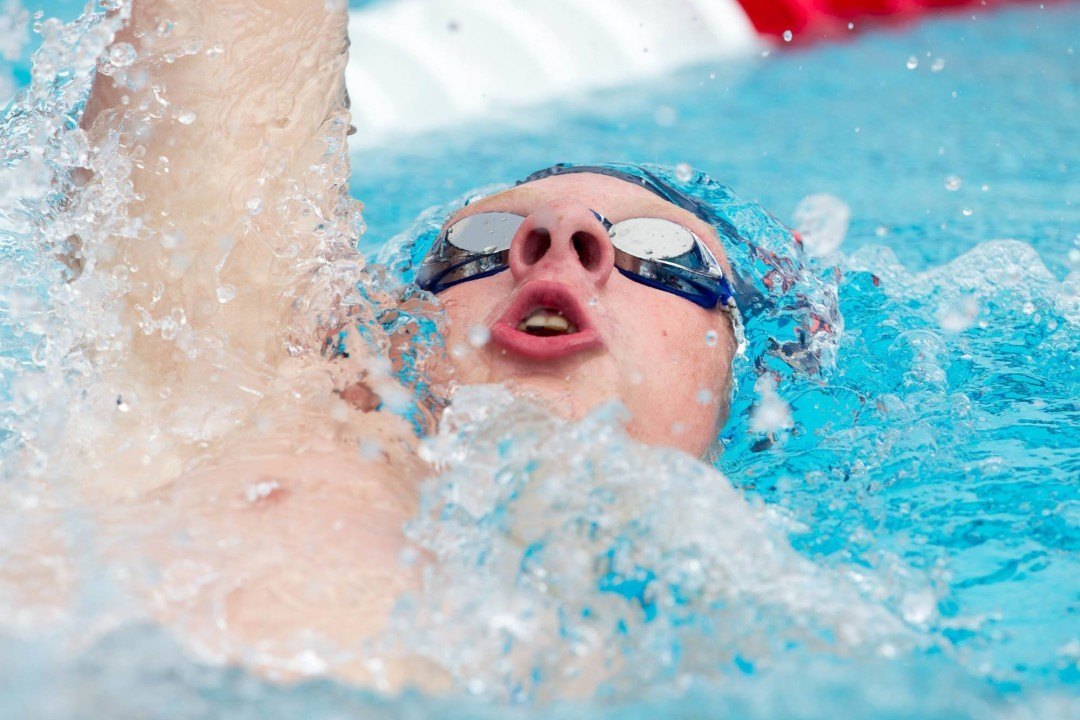 Heading into the meet, Jones was ranked 44th in the nation with his 3:46.62 from the ACC Championships. On Sunday, he took over 3 seconds off of that time, clocking in with a 3:43.36 to move up to 19th in the nation and secure his place at NCAAs. Archive photo via Tim Binning/TheSwimPictures.com

Louisville’s Jarrett Jones made a big improvement to punch his ticket to the NCAA meet in the 400 IM at the Ohio State Last Chance Meet. Heading into the meet, Jones was ranked 44th in the nation with his 3:46.62 from the ACC Championships. On Sunday, he took over 3 seconds off of that time, clocking in with a 3:43.36 to move up to 19th in the nation and secure his place at NCAAs.

In the 100 breast, UNC’s Craig Emslie moved himself up to the right side of the bubble. Emslie was previously ranked 34th with his 52.73 from ACCs, but he dropped his time down to a 52.42 this weekend. That now ranks him 21st in the nation and should make him a safe bet for the NCAA meet.

Cincinnati distance freestyler Chris Bready also secured a spot at the NCAA meet with his performance in the 1650 free. After the AAC Championships, Bready was ranked 36th with a 15:00.79. At the last chance meet, however, he smashed through the 15:00-barrier to lower his time to a 14:54.17. With a 24th place ranking, he’s now highly likely to make it to NCAAs.

Texas’ Will Glass improved his chances of getting an invite in the 100 fly. With his 46.21 from Big 12s, Glass was just outside of the bubble at 35th. He lowered that tiem with a 46.05 at the OSU Last Chance Meet, moving him up to a tie for 27th in the nation with Michigan’s Evan White and Notre Dame’s Justin Plaschka. Last season, 28 men were invited in the event, so that puts him right on the bubble.

Congrats to Will Glass for great swim.
He must be ecstatic that UT coaches decided to stick it to A&M, Missouri, Rice and all of the other universities and top age group swimmers who showed up for a last chance meet at Austin’s world class facility looking for similar opportunities, only to learn at 5:30 pm the night before the meet that the hosts had already left town and the visitors had to drive 100 plus miles to swim in a 4’ deep, warm-up pool.
Classy move UT. Glad your guys did well… that’s all that counts, right?

Difficult situation for the swimmers but the pool is about 7′ deep. I was there, was no fun!

Website lists it as 4′ to 7′ deep, so I guess that we are both right. And I agree, no fun. Not to mention the fact that we had two extra nights of hotel rooms to pay for as the non-cancellable part of our Austin hotel rooms sat empty. Multiply that by the at least100-200 room nights that were collectively non-cancellable in Austin, and parents/schools/clubs were out quite a bit of money, not to mention, time, effort and waste of good shave and taper for the swimmers.

I would love to see a statistic on the percentage of last chance swims where the swimmer drops time. Truly impressive