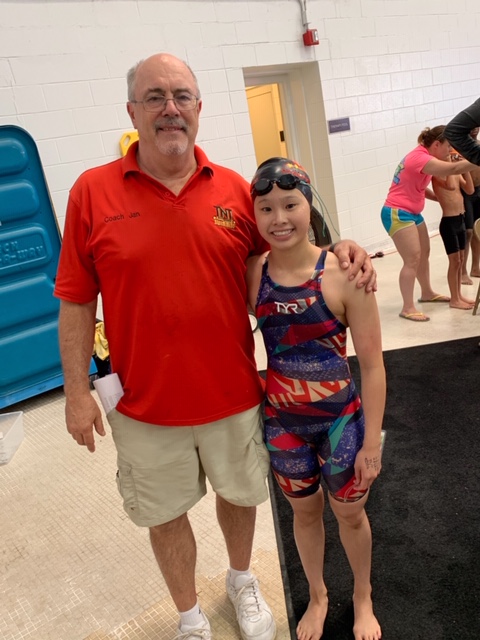 Levenia Sim, who only recently turned 13, has already lowered the her LSC's record, besting Tracy Caulkins' record that had stood since 1978. Current photo via Jan Mittemeyer

Caulkins would go on to be an Olympic and World Champion, as well as setting the world record in the 200 fly, among other events. At the time of her retirement she had set 63 American records, the most ever, 5 world records, and won 3 Olympic (all gold) and 8 World Championship medals.

This is not the first time the Sim has broken a record of a future member of the national team. Last year, while still competing in the 11-12 age group, Sim broke Regan Smith’s National Age Group Record in the 50 back. Smith is now the World Record holder in the 100 and 200 meter backstrokes.

Sim’s earned recognition as the Outstanding Female Swimmer of the Meet, due in large part to her 100 and 200 fly. With over a year left in the 13-14 age group she will have a strong chance of challenging the Southeastern Swimming record in the 100 fly as well. It currently sits at a 53.07, set by Gretchen Walsh in 2017.

Sim’s other results from the meet:

Levenia is the younger sister of Letitia Sim, who earlier this month committed to Michigan for the fall of 2021. A runner-up at the 2019 Winter Juniors, Letitia is currently ranked #9 nationally in the class of 2021.

Great swim Levenia! Beating Tracy Caulkins record says BIG THINGS about your talent. You’ve got serious talent, and a talented coach to boot! Best of luck to you! Looking forward to seeing you break more records in the future!

That swim’s just embarrassing — for me.

It was a beautiful swim and fun to watch. Great walls and underwater.

Wow that is some amazing swimming!!! Way to go Levenia!

It’s worth noting that Tracy tied the world record in the 200 Fly (LCM) at 2:09.78 at the 1978 Berlin World Championships, the same year as she set the LSC SCY mark surpassed by Levenia. It would be fun if Levenia could make the same type of seasonal progress!