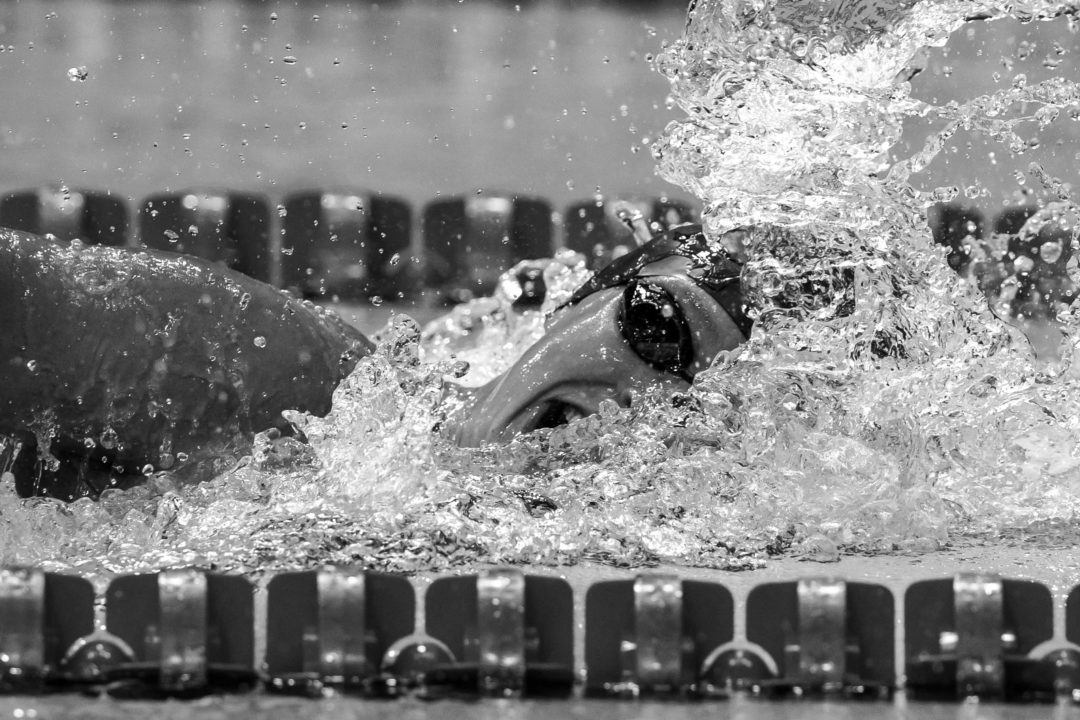 All good things must come to an end.  Tonight, Katie Ledecky dove into the pool in the finals of the women’s 200 freestyle having won gold in every single individual event she had swum at the international level.  That’s 13-0 across two Olympic Games and three World Championships, 17-0 if you include Pan Pacs.

Given Ledecky’s endurance, it wasn’t too concerning that she started a little slow.  But, world record holder Federica Pellegrini outsplit Ledecky 28.82 to 29.75, to win by over four-tenths of a second, as Ledeck tied with Australia Emma McKeon for 2nd.

Thus ended Ledecky’s streak of utter dominance that began in 2012, when Ledecky, a relatively unknown 15 year-old at the time, stormed out to a massive lead in the 800 free at the Olympics and never looked back, shocking the world and earning a gold medal well before she’d gotten her driver’s license.

She’d already won the 400  and 1500 free this week, and she appeared to be the clear favorite for the 200 as well, especially after she swam a 1:54.69 last night less than an hour after winning the 1500 free.  Obviously, that time would have earned gold tonight if she’d repeated it.  But the signs where there that Ledecky wasn’t just quite as sharp as we’d seen in previous years.

In her post-race interview, Ledecky wasn’t sure herself what exactly had happened, saying “I just didn’t feel really like myself in the middle of the race.”

There are plenty of possible explanations.  Given her post-race comments, it’s quite possible that she’s feeling just a little ill, something that would definitely compound the effects of a stacked lineup like she has.

Her performances this week could have been affected by the major life change she’s had this year.  After years of training at home and swimming for NCAP, Ledecky made the move across the country to Stanford, and switched coaches and training environment.  She wouldn’t be the first swimmer who’s had a small hiccup after making such a move (although, again, if not setting world records is one’s idea of a hiccup, you’re still doing very very well).

Also, as tough as this may be to comprehend, all swimmers hit their peak at some point, where they stop dropping time like they did when they were younger, and Ledecky may simply have arrived at that point.  That’s not to say she’ll never break another world record, or that she’s destined to become an average swimmer in the near future.  It’s just tough to stay at the level where you’re the top swimmer in multiple events for year after year.

None of this is a knock against Ledecky.  For each of the past four seasons, she’s taken on one of the toughest schedules you’ll ever see, and performed flawlessly.  Especially if she sensed that her training was a bit off this year, she could have paired down her schedule, focused on a couple events and shot for world records.  To be disappointed about “settling” for silver for the first time in well over a dozen individual swims shows how high she has set the bar for herself, and there’s little doubt that that the greatest distance swimmer ever will continue her overall domination to Tokyo and perhaps beyond.

This can only be good for Katie, who has changed coaches and started university, She will take a lot from this loss and bounce back!

This “article” reads like something I’d expect to see the comments section.

I think Ledecky misses the year-round coaching of Bruce Gemmell. It was a truly remarkable streak.

Well.. also remember Ledecky is human, we might have just seen her limit.. and maybe her program is starting to become too big for her to dominate all events with ease.. Or the college swimming was a drawback for her. Maybe give up NCAA near Tokyo

Yes, you are right. All those factors may have taken their toll. It was also Ledecky’s weakest event, I just wish it took an epic fast swim to beat her, no offense to Pelligrini who deserves her victory.

It was Pelligrini’s fastest textile time.

I hear Gemmell is mentioned as a possible UVA hire – perhaps he will take that job and Katie transfers to UVA to train for him and with Leah Smith!

Give up a Stanford education so she can train with a coach just as good as Greg Meehan.

The education point is valid. I would argue that Bruce has had far better results with distance swimmers, both nationally and internationally, than Greg.

Good that she only lost against Pellegrini. Best 200 free.
She medaled in 7 straight WC in this event

And the WR holder. She is the greatest. Babylonian passport holder. The world has ever seen

Eh. She’s been “on” at every big meet for the past 5 years. She’s allowed to have an off-meet once in a while without us claiming she’s plateaued. These things happen.

Ledecky is allowed to have an off-race once in a while without claiming she’s plateaued.

It’s happening second time this season. It’s like tapering process adds nothing to her speed endurance. Her last fifty together with two sprinters was the worst in this final. Her times in other races are no better than at trials. It’s happened first time in March at NCAA. Then I blamed it on incorrect tapering management that forced her to be fast at Pac-12 for the sake of team interests. Now we see similar situation, but I don’t know what to blame it on. It all is happening to the swimmer who was for five years the model of huge time drop after tapering. Something is definitely going wrong.

She will come back….

She doesn’t need to win every race, getting a silver in no way indicates that she isn’t still the best swimmer competing right now.

Even if Ledecky missed her taper, it’s not the end of the world.

Since the women’s 1500 m freestyle will be contested in Toyko, Ledecky needs to seriously drop the focus on the 100 m freestyle.

I’m not sure “incorrect taper management” is appropriate considering Stanford won NCAAs and Ledecky won all her events.

It is true. She is a great swimmer. And is #1 in 200 this season. But I’m talking about completely different thing. Because of her superiority she may not need tapering at all to win her races. But if she wants to be at her best results or near to them the tapering process becomes important. How 1:53.7 swimmer who was already in 1:54 zone twice this season can swim 1:55.18. The only thing I can think about that that is the consequence of hard yesterday’s races and she hasn’t recovered to the required form. But that is exactly what tapering process is good for : speed endurance and recovery. Your body accumulates resources during tapering period to support such… Read more »

Guys, she got second place ONCE for the first time in 5 years. I think she’s going to be fine.

Yet Katinka Hosszú finished 7th behind Leah Smith and had not swum a race greater than 200 m.

Congratulations to Leah Smith for a personal best in the women’s 200 m freestyle.

and she’s the “Iron Lady”…imagine if she wasn’t…

Katinka Hosszú looked more like the wilted lily in the women’s 200 m freestyle.

To be fair she’s not a freestyle swimmer and just entered for the hell of it.

He didn’t really decline, he just tried different events that year, like the backstrokes and 400m free.