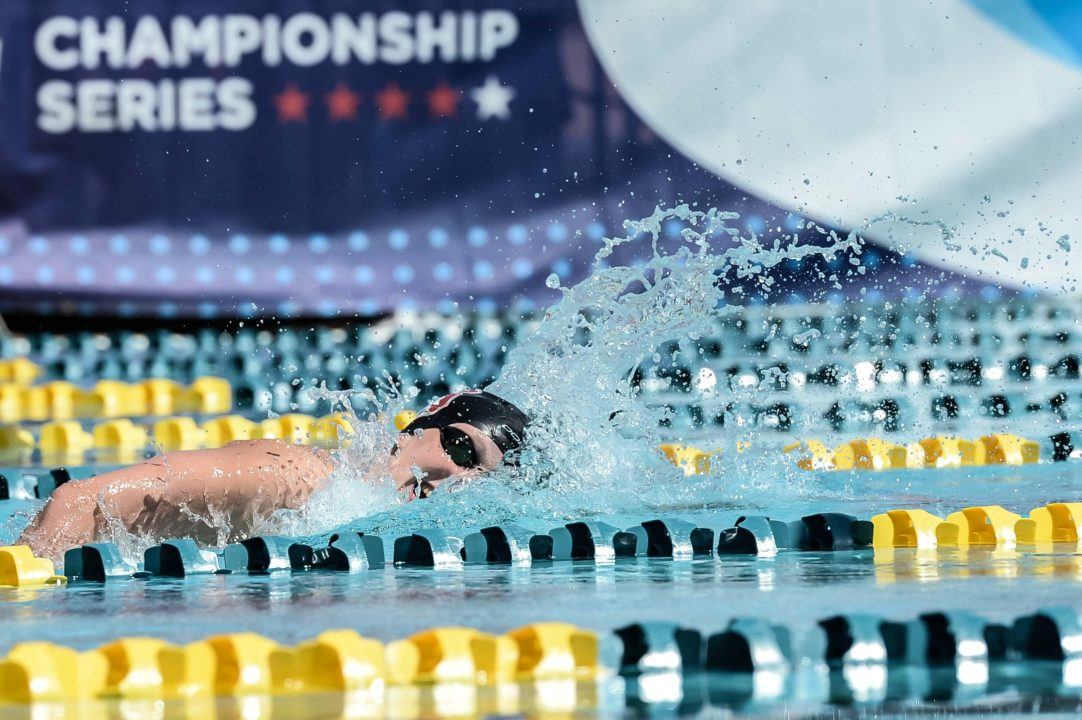 The 2017 Santa Clara Pro Swim got underway tonight with a couple of timed final distance events, and as usual fans were treated to the Katie Ledecky show.

In the first heat of the women’s 1500 Ledecky demolished the field, negative splitting her way to a time of 15:35.65. The swim is the 5th fastest swim of her career, and therefore the 5th fastest performance of all-time.

She is now the owner of the six fastest swims in history, and seven of the top ten. The swim moves her into #1 in the world for the season by a whopping 28.5 seconds, with Hungary’s Boglarka Kapas now 2nd at 16:04.19.

Here’s a look at the ten fastest performances in history:

Ledecky’s dominance in this race is truly mind boggling, especially considering it’s never really been her primary focus since it’s not contested for women at the Olympics.

When Kate Ziegler went 15:42.54 in 2007, she broke Janet Evans‘ 19-year-old world record by 9.56 seconds. Just ten years later, and that swim now sits 10th on the all-time list and Ledecky has been an incredible 17 seconds faster.

In terms of gauging what this swim could mean for Ledecky this summer, it’s tough to tell because she really hasn’t raced the event much over the years. This is the first time she’s done it since the record breaking swim in Kazan. At the Mesa Pro Series in 2015 she was 15:42.23, six weeks earlier in the season than her swim tonight in Santa Clara. She’ll also have to race at US World Trials prior to Worlds this year, something she didn’t have to do two years ago.

Though a world record seems likely at some point this summer, nothing is certain. However, after Budapest she’ll likely own all ten of the fastest swims in history. She’ll race the event three more times this year (prelims & finals at Worlds, US Trials is timed final), and just has to keep all three under 15:38.88, which seems inevitable.

Does Katie have to swim the 1500 at Nationals to be able to swim it in Budapest?

Not bad at all, but splits are very strange to say the least. Especially after 900. Like a drunk person is rushing home and stumbling at each step. Fortunately she still has almost two months to polish the strategy for this race.

I don’t really know how to put this….your analysis is horrible.

You put it very nicely actually without making any personal insults. But it wasn’t an analysis at all because no numbers were presented. It was a personal impression. I can submit the charts that will demonstrate how different her yesterday splits are from other five her best races. But I’m afraid to bore you not knowing what kind of analysis you would like to see. After watching this race for the second time I noticed that the sun maybe a factor. It looks like the pool is oriented north-south therefore at 5-6 pm race the sun can blind swimmers. Is it better “analysis”? Whatever reason was but her splits were strangely unusually uneven jumping suddenly sometimes by more than a… Read more »

I don’t know the pool layout but it could be that her lap counter was hitting the pad.

Haven’t you noticed the pattern? Don’t take the bait. ?

She seems to have slowed down as in the past she was breaking world records even in smaller meets seemingly untapered. But even a slow ledecky is winning gold with her slower in season times.

You say ledecky is doing fine and I agree with you. She,’ll still going to win even if she,s slower.

I,m not saying she,s not going to be faster in Budapest. She will. But even if she doesn’t improve (which is unlikely) and… Read more »

Although I agree with your main point about how fast Ledecky is, I have to disagree with your assertion about how long her WR might stand. Even if, for the sake of argument, we say that Ledecky will be able to drop the WR down to 15:19 before the end of her career (a six second drop doesn’t seem unreasonable), I would argue that it would last at most thirty years. Evans’ 15:52 lasted for 19 years, and then it was absolutely shattered. My opinion is that there were others who were capable of swimming faster than the record, but didn’t deep down believe that they could do it; I could be wrong, of course, but that’s what I think.… Read more »

N P, nobody is beating ledecky or her records. I don’t care how much they train. It,s not happening.

Florence griffith joyner,s records still stands today. Some records are just too much.

I respect your opinion. I guess will have to revisit this argument in thirty years!

spiderman’s uncle said “with great power comes great responsibility” which in this case means that KL has been swimming at the highest of level for the 5 seasons now so she knows how to handle these races in smaller meets and even qualifying meets (like the us nationals and trials). if she swam 15.35, the 5th fastest time ever, at this meet she is definitely swimming 10 secs faster in Budapest (only a 0.33 secs improvement for each 50). At this point in her career she will only point to the big meets.

She,s still fast even when not at her best though