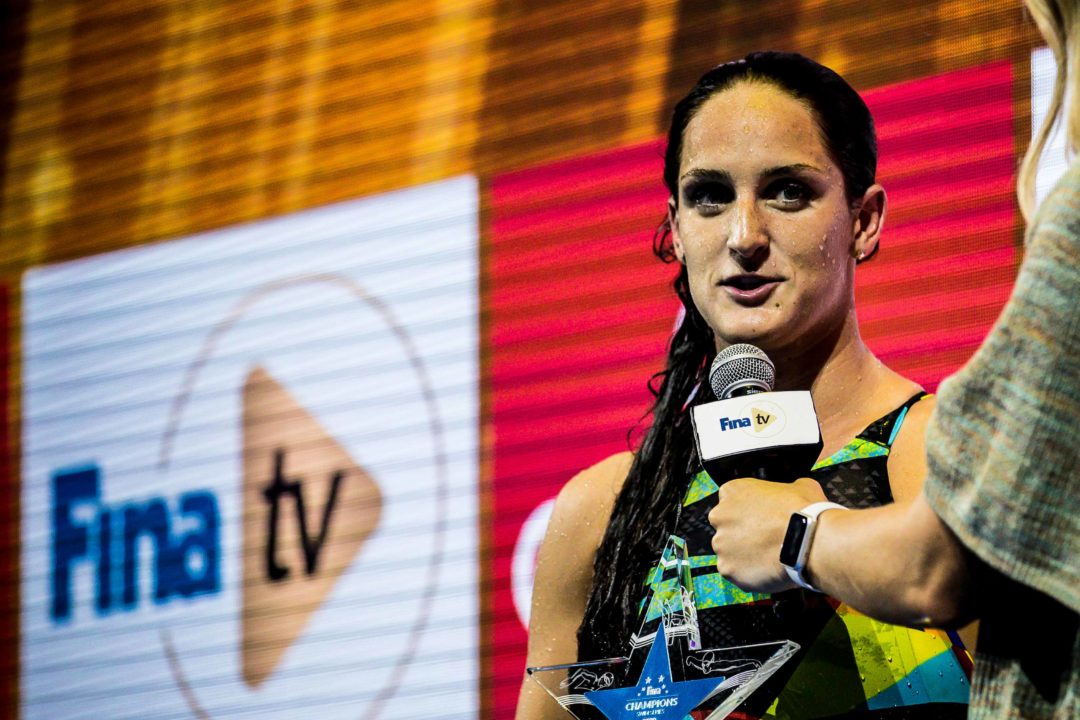 After following her longtime coach Chitwood from Virginia to Arizona, Smith will not go to Indiana, where he was named an assistant last month. Current photo via Jack Spitser/Spitser Photography

Olympic medalist Leah Smith will not follow her longtime coach Cory Chitwood to Bloomington, Indiana, where he was named an assistant coach at Indiana University last month, she told SwimSwam Tuesday.

Smith has worked with Chitwood since her NCAA days as an undergrad at the University of Virginia and followed him to the University of Arizona when former Virginia head coach Augie Busch took over there in 2017, bringing Chitwood along for his new staff.

“I will be staying in Tucson, Arizona to train for Tokyo 2020. Having trained under Augie and Clif [Robbins] the past 6 years, and Jesse [Stipek] the past two years, I know that I will be in great hands as I progress in my career,” Smith wrote in a statement. “I look forward to continuing my training with my awesome training group and team here, and I am excited to meet the new coaches that will be hired. I am grateful to Cory Chitwood for all he has done for me in my career and wish him the best at Indiana.”

Chitwood rose from assistant to associate head coach in his time with the Wildcats before he and the program parted ways in April.

Under Chitwood’s watch at Virginia, Smith became a four-time NCAA champion individually. She was a multi-time Pan Pacific Championships medalist and World University Games Champion before qualifying for the 2016 Olympics, where she took bronze in the 400 free and gold in the 4×200 free relay. She picked up a silver in the 400 free at the 2017 FINA World Championships, as well as gold in the 4×200 and bronze in the 800.

Just recently, in April, Smith hit a lifetime best in the 800 at the 2019 Pro Swim Series Richmond stop.

She was originally recruited to UVA by Bernardino, but never got the chance to swim under him. Given his success in coaching distance swimmers, wonder if she considered moving to Raleigh and training with the NCSU pro group under Dino?

I know it didn’t play much part but also..Arizona winter or the Indiana winter?

Ever been to Tucson in July?

I think almost anything beats Indiana anytime of year.

Jumping into an outdoor pool in Arizona in July or an indoor pool in Indiana in January. Yeah she made the right choice.

From her social media, it looks like Leah enjoys hiking and nature. The opportunities for that in AZ are much more plentiful than in Bloomington.

I don’t get why everyone is ragging on Indiana lol. I’ve gone on a number of beautiful hikes in Indiana and in the states that surround it.

both regions offer apparently a lot of hiking possibilities ….

It seems that you have not frequented the High School Basketball Hall of Fame, the world’s largest field house or Circus City.

Great leadership being shown by Justin and Leah to stay here and train through 2020. The program should be on the upswing now.

Smart move Leah! Best of luck to you and the pro group at AZ. You and your team mates can now enjoy the U of A atmosphere as it should be.