Lauren Patterson Gives 2024 Verbal Commitment to the University of Kentucky 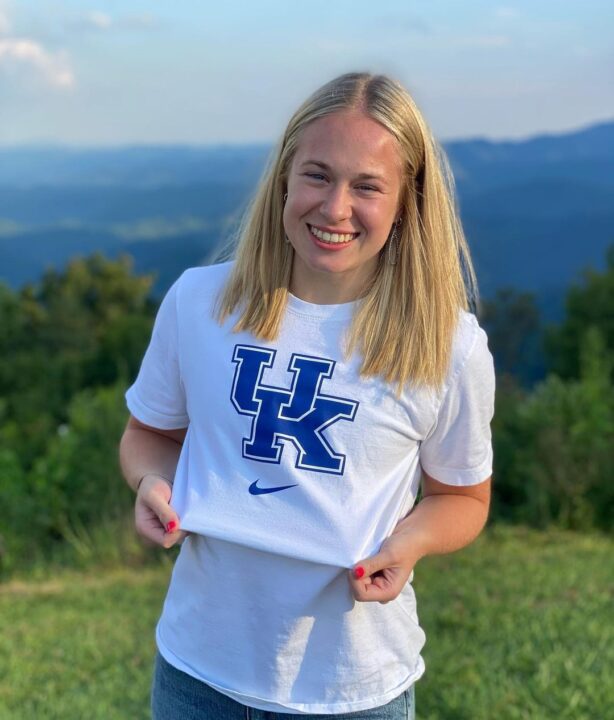 A highly versatile swimmer with the potential to contribute in multiple events, Patterson will join the Wildcats as a member of their class of 2028.

With a year and a half of high school left to improve, Lauren Patterson of Boone, North Carolina has announced her commitment to the University of Kentucky for the fall of 2024. Patterson is currently in the middle of her junior year of high school at Watauga High School and swims club with the Enfinity Aquatic Club.

Last spring, as a sophomore, Patterson was a two-event finalist at the NCHSAA (North Carolina High School) 4A State Championships, a meet consisting of teams from the state’s largest schools. Her top finish came in the 100 fly, where she took 6th in a time of 55.60. She was slightly faster during prelims of the event, posting a lifetime best of 55.39. The event was won by Claire Curzan, who reset the American record in a time of 49.24. Patterson also took 14th in the 100 breast, finishing in 1:06.18 in finals.

Patterson followed up her high school season with a strong showing at the NCSA Summer Swimming Championships in July. Racing eight events across the weekend, she was able to qualify for finals in both the 50 back and 50 breast. Her highest finish came in the breast, where she took 29th in 34.81.

Even with over a year left to improve before arriving in Lexington, Patterson already boasts times that would contribute strong depth to the Kentucky roster. Last season, she would have held the team’s 5th fastest time in the 100 fly and 7th best 100 breast. Last year Kentucky’s fly group was led by current senior Caitlin Brooks, who won the B-final at the SEC Championships in a time of 52.03. She went on to take 29th in the event at the NCAA Championships.

Patterson won’t be the only member of Kentucky’s freshman class in 2024 to boast an impressive time in the 100 fly. Addison Reese, who was one of SwimSwam’s “Best of the Rest” on our “Way Too Early” recruiting ranks, has already been 54.2 in the 100 fly and has verbally committed to the Wildcats.

Patterson and Reese will be joined by Emma Finlin, Hayden Penny, Taylor Grimley, and Bailey O’Regan as members of Kentucky’s class of 2028.

Kentucky has consistently brought in talented recruiting classes, with their freshman class this year ranked 15th in the country by SwimSwam. That group is headlined by a trio of “Best of the Rest” honorees in Lydia Hanlon, Denise Phelan, and Jordan Agliano. Hanlon entered college already having gone 53.5 in the 100 back, while Agliano had dipped below 53.0 in the 100 fly.