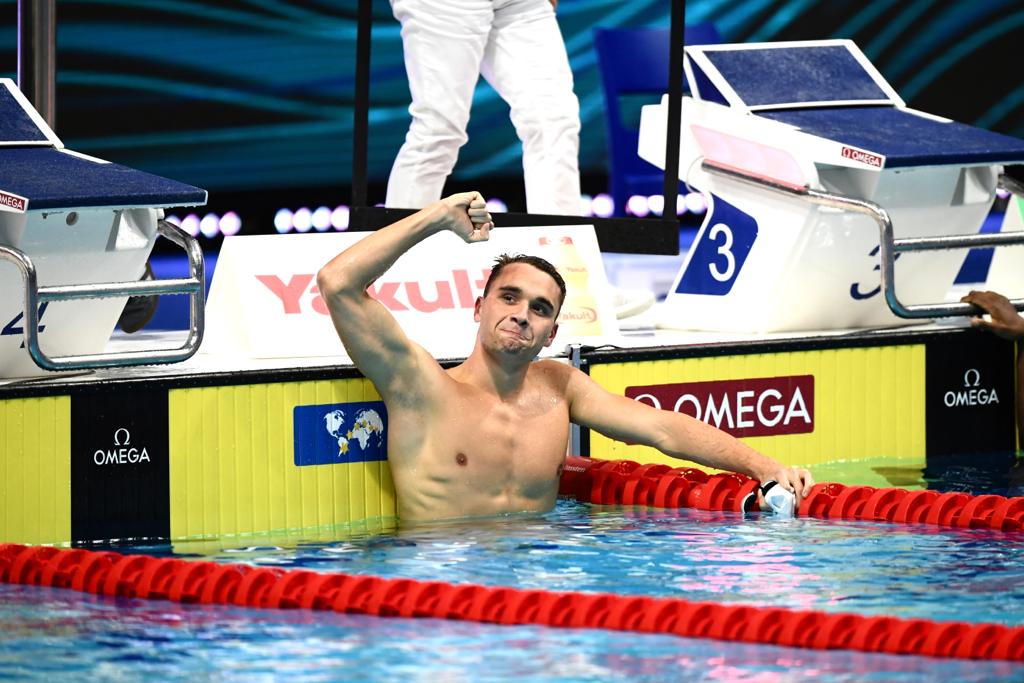 With the entry lists for the 2022 European Championships published, we know that Hungary's world record holder Kristof Milak will be broadening his horizons.  Archive photo via Fabio Cetti

With the entry lists for the 2022 European Aquatics Championships now published, we know that Hungary’s world record holder Kristof Milak will be broadening his horizons.

Milak’s coach Balázs Virth says of his multi-faceted protege, “His training has changed a bit, so we put more emphasis on speed.

“Many people have asked me what results I expect from it. Well, since I don’t like to guess and I don’t usually talk about the color or number of medals, I’ll just say that Kristóf is in good shape. What does that mean? I think everyone knows the answer.”

However, Mila, himself says that medals themselves are not the sole goal.

“At the European Championships, I will start in many races than before the finals which will require much more tactical racing.

“I have to save my energy during the preliminaries, so in Rome, my goal will not be primarily to finish at the top.” (Blikk)

At the very least Milak will try to defend his 100m and 200m European Championships golds from last year when he established new meet records of 50.18 and 1:51.1.10, respectively.

“I’ll just say that Kristóf is in good shape. What does that mean? I think everyone knows the answer.”

Well, NOW i’m looking forward to the european championships. Would love to see a 49.44 WR – a nice little motivation for Caeleb to come back even stronger.

I doubt we will see 100 fly WR. The 100 fly final and 200 free semi are only 10 minutes apart. He would save some energy as he can win the fly comfortably with a 50-mid something.

Just noticed there is also a relay on the same day for him. I think he definitely won’t go all out in 100 fly.

He might just go all out in prelims in the 200 free for a fun & get a tapered time and then scratch, semis. Why not?

As he is focusing on the free events at this European Championships , and he will have a loaded schedule with all the free relays + his individual events, we can’t expect a 100 butterfly, WR. He’ll wait for Dressel with it:)

Maybe the first one is doable, but for the 200m free, depending on the 200 free SF times, he may not get into the final even…

Me too. I want to see that barrier go but I guess what we want doesn’t matter much.

Anyone knows what’s happening with Dressel?

Some say he Pop out.
Others says he Popped a shoulder
While some harsh says Popoviced

I have huge respect for Dressel, but just having laugh.

Presumably he is not swimming. If he was you would have heard about it I think.

Would love to see Popovic vs Milak in the 200 free be a thing for the next 6 years!

Wouldn’t even be close. Popovici is far beyond him the frees

Eh Milak went out in like 23.2 in his really and still went 1:44 mid. I think with smarter pacing and more training for it, he could peak at 1:42. I think that Popovici will probably be unbeaten here for the decade however.

1:42 is more absurd than everyone saying that dressel is able to go 1:44

And that’s not even the worst of the Dressel predictions because I saw some say 1:43!

7
-4
Reply
swimmer
Reply to  This Guy

Ya that would not be a race

I mean, not right now. But it’s not guaranteed Popovici keeps improving and that Milak doesn’t.

(And like, what’re the odds they both go 1:44.5? Popovici a second slower than Worlds, Milak a second faster. It’s not zero!)

Milak went 1:50.73 in 2019, when he was arguably still a teenager. It took him a whole three years to improve that mark to 1:50.34. It doesn’t seem like he is one for significant improvements.

Meanwhile, Popovici went from a 1:44.68 to a 1:43.21 in less than one calendar year. And he is still way younger than Milak was when he broke Phelp’s supersuited record. He should get to a 1:42 low or 1:41.x before turning 19, based on what we have seen of his improvement curve.

You can forget about 2020. There were practically no meets. And he could have got that WR in Tokyo if the jammer thing didn’t happen.

Also he wasn’t prepared for a WR at Worlds initially because he was sick twice at the beginning of this year and only trained massively i would say after Mare Nostrum. After the semi ppl said he could do a WR, then he did it as if it could be done as long as he wanted to. 🙂

Popo is for sure much younger and surging. But let’s talk about this again after he does break that shiny WR.

You somehow forgot to mention that Milak went from 1:52.7 to 1:50.7 in a year when he broke Phelps’ WR. There were basically no races in 2020 therefore that year practically doesn’t count, last year in Tokyo he was in great shape, and could have easily got a WR if that unfortunate thing hadn’t happened to him 10 minutes before the final. He showed this year at Worlds how he was able to get into a fantastic shape in a few weeks even if he struggled with illnesses during the preparation. Let’s wait and see what improvements he’ll do.

Popovici is young but don’t talk about him as if he had already set multiple WRs.

Looks like fantasy booking Milak is gonna be a thing now lol.

History abounds with examples of great 200 flyers who were also great 200 freestylers (Spitz, Gross, Phelps …) so why not?
However I would also throw Galossi in the mix.